It's not much of a coincidence that our first round of Commodore 64 whales (finally!) postdate our final Atari 2600 whale by only a few months. Atari had dominated the North American market for years up until the infamous crash, all but taking down its competitors along with it and sending rippling effects to the arcades as well. It wasn't until after Atari sales bottomed out that the C64 games market gained a chunk of that ceded ground. The computer itself, though an incredible seller as early as 1983 thanks to its budget price and high RAM spec, initially went underappreciated as a games machine. Even visionaries like Danielle Bunten Berry failed to grasp the power of its VIC-II chipset, unmatched in its sprite and scrolling capabilities by any contemporaries except for expensive arcade PCBs and the Famicom.

It's also not much of a coincidence that Summer Games, the first of these C64 whales, bears a strong resemblance to Activision Decathlon from the previous year. Epyx had just merged with developer Starpath, whose unsuccessful Supercharger product sought to expand the Atari 2600 with more RAM, higher resolution, and bigger games, and one of its unfinished prototypes was the dismally named Sweat!, an attempt to improve on the aforementioned game. The concept, if not the programming or any particular gameplay mechanics, planted Summer Games' seeds.

I did give Sweat! a cursory look and can conclude it is not suitable for review as an ancestor - it's barely playable in this unfinished state, and does not inform our understanding of Summer Games' evolution beyond some aesthetic design choices.


The format of Summer Games is familiar, but the disciplines are more varied and complex than their Decathlon counterparts, which in Activision's interpretation amounted to little more than waggling the stick and pressing the button at a precise time. Only the 100m dash and the pole vault are recycled, and the rest of the games are new.

Summer Games does have an option to play all of the games in sequence, but without a Decathlon-like scoring system for evaluating overall performance, we didn't see much point. When playing individual games, may can choose whether to practice or compete. The main difference is that practice allows quick replays but has no player registration and no awards, while competition has you register each player's name and nationality ("D" objected to the exclusion of her Portuguese heritage, and hissed at my suggestion of representing Brazil instead), and gives you each one shot at the game before awarding medals, acknowledging broken records, and dumping you back to the title screen.

I had a session with "D" and "B," where we first sampled all of the games, and then played our favorite events in competition, giving each of them a practice round or two first. I recorded it, but unfortunately the video completely crapped out during the first several minutes, ruining most of the high dive event, which we did first. I've cut out the ruined portion, starting with the tail end of the high dive event, and even that is choppier than it should be, as are a few later parts.

Unlike those prior decathlon games, you really do need to practice each event before you can be even competent at it. You'll want to read the manual too, as most events have more involved controls than the Decathlon predecessors. 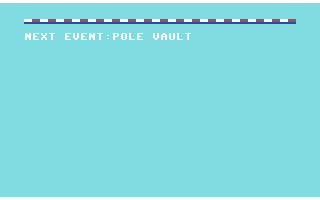 I must note here the Commodore 64's greatest and most infamous weakness. The disk drive, by far the most popular format in the US, is painfully slow. In VICE, with accurate 1541 timings and a G64-format disk image, it takes a good two and a half minutes to get from system boot to gameplay, and another minute to load each subsequent event. The warp speed emulation option helps some, but you have to take care not to overshoot the loading sequence and miss the event itself.

The first event, the pole vault, is one of the most frustrating, but what I find interesting is that it mirrors Microsoft Decathlon almost exactly. First you select the bar height, and then select a pole grip height - the lower your grip, the easier the timing demands will be on the subsequent actions, but higher grips allow higher jumps. Then, as the runner enters the screen, press down to plant the pole, up to kick into a handstand, and finally fire to push off. Microsoft Decathlon also made you manually run by alternating left+right, but apart from that and some timing differences (and the C64's colorfully animated presentation), these are the same game.

The strict and confusing timing requirements made the event frustrating to all of us. Figuring out when to plant the pole was a matter of trial and constant driving into the runway or mat, and even after I could consistently get it into the box, I could never figure out the ideal kick-up time. Most of my vaults would sail right into the crossbar with no indication on what I did wrong. At least Microsoft Decathlon gave you feedback on your timing errors.

None of us could clear even the lowest bar consistently enough to make a competition worthwhile, so we moved on to platform diving.


Here, your initial score is determined by how close to perfectly vertical you are when entering the water up to a maximum of 50 points, which is then multiplied by a difficulty factor determined mainly by how many rotations you completed before entering. Your only input is to control the diver's tuck level, which determines rotation speed. You need to straighten out at just the right time so that you enter the water head (or foot) on, and the faster you're spinning, the harder this will be.

I found the best strategy is to go right into a full-tuck right off the board, straighten out just before landing, and hope for the best. You just don't have time to slow down gradually, and a perfectly executed dive with the second-fullest tuck scores you barely more than 100 points, which you can easily beat with a fair-to-middling full-tuck dive.

Where Activision Decathlon destroys your joystick and your arm with a 45-60 second marathon of intense waggling, Summer Games goes for a more strategic game of stamina management. Joystick neutral maintains pace, joystick left 'coasts' to regain stamina, joystick right expends stamina to sprint, and the button passes the baton.

The rules on gaining and expending stamina are a bit obscure, and I'm sure that with some analysis one can calculate the optimal strategy. I found that constantly alternating between coast and sprint got me under the three minute mark fairly reliably.

All of us thought this was one of the better events, and we played it in competition mode, where two players may race simultaneously. As the C64 only has two joystick ports, the third has to race the computer.

The 100m dash goes right back to arm-breaking mercilessness.

It's a Decathlon-style joystick waggle game. We all thought this one was lame, but at least it's short.

It's somewhat like the pole vault, a bit more complex, but the timing is so much easier, and the event so much more doable as a result. Time your jump to hit the far end of the vault board, time the push-off from the horse for maximum power, and then hold up to tuck and somersault, and down to straighten out for a landing. If you land off-balance, correct it with left or right. You can optionally perform a Yurchenko vault by holding right on the stick as you hit the springboard, which boosts your score but increases the difficulty of the push-off timing. With full power, up to three flips can be performed before landing, and this matters more to your score than sticking the land (though you've got to do both to get a 9+ rating).

In the competition, you get two vaults, and the scores are summed. We all did pretty crummily in competition here despite the practice. Consistency is key. Nevertheless, all of us thought this was one of the better events.

400m freestyle relay is the next event, and probably the most technically impressive in the game.

Horizontally scrolling a complex, multi-color scene of this resolution is something you just don't see on contemporary computers or consoles other than the Famicom. The effect is complicated, but playing the game is pretty simple; 99% is simply tapping the button in rhythm with the swimmer's arms. The rest of it is pushing the joystick left once you reach the end of the lane to reverse, and pushing right again to launch the next swimmer, both of which can be done a bit early to save a good fraction of a second.

The next event is 100m freestyle but this one feels like a cheat. It's just the same swimming event again with a single lap instead of four. We didn't do either of them competitively.

The final event is skeet shooting.

So it's not exactly Duck Hunt, or much of a C64 technical showcase, but it's challenging without being obtuse. Speed matters more than precision; you get a very generous hitbox on the targets, but you only get one shot per. Your aim slowly drops when the stick is left in neutral, adding the challenge of anticipating how high to lead your shot.

GAB rating: Average. Summer Games is certainly improvement over the monotonous Activision Decathlon (and Konami's excessively harsh Track & Field), and from an audio-visual perspective, a good example of early C64 material, but none of the games here hold much lasting value. The best of them are rather basic and easily mastered, and the two Decathlon events here kind of stink.