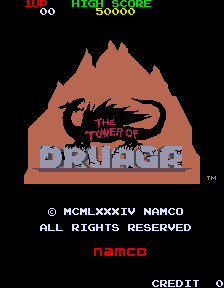 Masanobu Endō's Tower of Druaga is full of secrets. Nasty, dirty little secrets. Endō put some pretty obscure secrets into his prior release Xevious, giving it an ethereal sense of mystery and an illusion of greater depth than what it really had, but while Xevious's secrets were for fun and scoring, this tower pulls the scaffolding out from under you for failing to unravel its enigmas.

Immensely popular in Japanese arcades, it remained exclusive there, apart from an obscure European release of its sequel, until Namco included it in a PlayStation compilation disc to no particular celebration. Nevertheless, it had long left its mark in history, spawning a multimedia franchise, and becoming a foundational title in the development of Japanese action/adventures, paving the way for international hit The Legend of Zelda. For this reason, I have selected it as a discretionary whale. 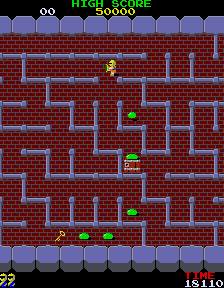 Approach this game blind - I'm afraid I didn't, having read spoilers on Druaga's tricks years ago - it first appears to be a leisurely, if unforgiving dungeon crawl, somewhat visually reminiscent of PLATO's dnd, where the slime monsters roaming the corridors pose little threat so long as you move carefully and keep them at a sword's length from you, taking heed of protagonist Gil's seconds-long period of vulnerability when he draws or sheathes his sword. The time limit is more of a concern, and puts you at the mercy of randomly generated mazes. Sometimes you'll have to travel the most roundabout route to nab the key and walk back to the exit door on the return trip, running out of time thanks to Gil's painfully sluggish gait, causing the level to spawn deadly and persistent fireballs. Other times the key and door will spawn right next to each other, and you'll clear the floor in seconds.

On the second floor it's more of the same, with black slimes that move a bit faster than the green ones. Floor three introduces knights who have swords of their own, but don't seem to harm you so long as yours is drawn. Floor four adds a wizard who teleports around and zaps you with lighting magic, giving just enough warning to point your shield in its direction.

And Druaga laughs, for the tower's first secret is that you failed her challenge almost as soon as you started. No matter how perfectly you play, it's only a matter of time before you get zapped by an invisible wizard, slain by an invulnerable knight, annihilated by a dragon, or simply get stuck in a maze with no exit.

You may or may not have noticed the occasional treasure chest appear while roaming Druaga's mazes. And you may have assumed these treasures are like the fruits in Pac-Man or the vegetables in Dig Dug - bonus collectibles that just appear sometimes worth extra points. As a matter of fact, you need them. There's one per floor, and the condition to trigger its appearance is different on every single floor. You need most of these treasures to win. Except for the ones that do bad things - you definitely don't want those, but good luck figuring out which is which.

For instance, on floor 1, killing three slimes unlocks a pickaxe which can break through walls, but will eventually break if overused. And on floor 2, killing two black slimes unlocks boots that upgrade your walking speed to something more manageable. These first two upgrades alone make a profound difference, but you need so much more, and the trigger conditions get sillier and more impossible to guess the higher you climb. On floor 7, for instance, you may get a stronger, silver pickaxe, but only if you purposefully break your standard one on this floor and not any earlier.

I played first without any further spoilers to see how far I could get. The answer is floor 12. At this point, you're bombarded with spells from invisible casters, and trying to deduce the location of the item needed to see them, or the method to trigger its appearance, had long ceased to be reasonable.

I then played to completion using a play guide. A total spoiler, certainly, but it was either do that and see the rest of Druaga's content with compromised play integrity, or stop playing altogether. I also made use of a secret continue option, activated by holding the sword button before pressing start, which allows continuing on the floor where you met a game over instead of having to restart from the bottom. Beating the level after a continue even gets you back all of your points! This feels less cheaty simply because the method seems no less absurd than many of the other secrets you've got to discover to win the game. You must still be careful, though, not to let your pickaxe break, for if it does then you've got to restart from floor 1 to get it back.

I jotted down some thoughts while playing. 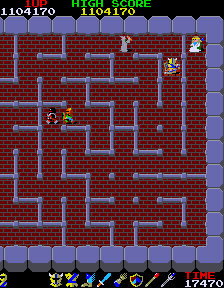 But she's a fake. Kill her, and then kill the lizard knight, to spawn the ruby mace weapon, which one-shots dragons.

Floor 58 contains the final treasure, a blue crystal rod, and requires you to touch three invisible triggers in sequence to spawn its chest.

Floor 59 is the final battle. It might have actually been a fun challenge if I weren't numb at this point.

First you have to kill a knight. Then wizard snipers spawn, but though all of their spells are deadly, only one of them is real, so no picking them off one by one - you've just got to guess until you stab the right one. And your hyper armor won't help here - it will save you from a hit, but in doing so reduces your invisible energy meter to nil, making it impossible to fight Druaga once she spawns.

Kill the right one and a dragon spawns. No problem if you got the ruby mace two floors ago. And then Druaga attacks, who isn't nearly as challenging as the wizard snipers (but still pretty deadly).

At last, Ki awaits on floor 60! No monsters here, just one last puzzle to solve - get Ishtar, place two of three crystal rods (you got them all, right?) in their spots which mirror the invisible triggers on floor 57, bring Ishtar to the spot opposite her throne, pick up Ki there, and place the third rod in its place to finish the game. Do anything out of order, break any walls, or just run out of time and you don't merely lose a life - you get "zapped' back to a floor on the teens and lose most of your treasures. And continuing won't get them back.

GAB rating: Bad. Druaga's local popularity and influence can't be denied, but this isn't a good game on the surface, the secrets needed to get anywhere are so unfair they feel like parody, and it still wasn't a particularly enjoyable experience with a walkthrough windows side-by-side with MAME. I'll accept that what I did isn't the intended experience or setting, and perhaps that makes my evaluation unfair, but I can't see how any alternative would have been better. Reportedly, a culture of note-taking and sharing secrets sprung up surrounding Druaga, but still, many of the secrets are so ridiculously obtuse that I can't fathom how anyone could have had the money or patience to discover them.

The concept of item-based progression is an appealing one, and so is the idea of exploring a world full of secrets that grant permanent power upgrades when discovered. It satisfies that RPG-like itch of watching your character become more powerful over the course of the game without the common RPG pitfalls of grinding or overlevelling, and is well suited to games with action trappings, as The Legend of Zelda eventually demonstrated. It's just not implemented well here.

I'd thought about ways Druaga could have been improved without retroactively turning it into a Zelda clone. The hideously arcane secrets would have had to been dramatically softened, perhaps eliminated altogether by just spawning the chest without requiring a trigger, or at least giving a clue. My next problem was the frequent unavoidable deaths from the wizard snipers, and I thought that maybe Gil's health could, first, be made visible on screen, and second, upgradeable by killing monsters for XP, to the point where a shot or two might be survived. Turns out, the PC Engine port does almost exactly that. Ishtar gives you hints before each stage, and "courage" can be accumulated throughout the game and exchanged for stat upgrades including additional health, which is shown onscreen in this version.

Email ThisBlogThis!Share to TwitterShare to FacebookShare to Pinterest
Labels: Namco