Few genres have proven so resilient to evolution as fighters since Street Fighter II carved the modern template into stone with a well placed uppercut. This isn't to deny the genre any advancement since, but fact is, decades later, Street Fighter II and its contemporaries feel nowhere near as foreign as Wolfenstein 3D does compared to later shooters, or King's Quest to later adventures, or Ultima Underworld to later dungeon crawlers. The modern fighter differs from its codifying ancestors mainly by degrees of breadth and complexity. Groundbreakers that carved out a niche within this niche have at best coexisted with the Street Fighter formula, but even the most successful have yet to truly revolutionize it.

The fighting games that predate Street Fighter II, though, are a diverse array of weirdness, as one may expect from a landscape where dozens of developers all have different ideas on how to simulate a martial arts tournament without having any one particularly successful example to take notes from. Technos Japan & Data East's Karate Champ is, in my opinion, the first attempt of significance, and the first to directly influence many key elements to come, even if the holistic experience feels both primitive and alien.

Karate Champ sides more toward simulation than most, with its realistically proportioned and fluidly animated practitioners, its limited but authentic set of karate strikes, and full contact kumite rules. There are no health bars here - each hit scores a full or half point depending on the difficulty of the move and the skill of its execution, and the first to score two full points wins the match. There's a weighty, physical feel to the movement, where every footstep forward or backward counts discretely, and each strike is a commitment that can be reversed at any point but never taken back (i.e. you can do a fakeout roundhouse but forget about kara-canceling a fully extended foot).

Move execution itself is probably the most unique aspect of Karate Champ. Lacking any face buttons, the cabinet presents you with twin 4-way joysticks, and each combination of directions performs a different action. Some combinations are even context sensitive -  for instance, pushing forward on the right stick performs either a front kick or reverse punch depending on how close you are, and pushing back on the left stick normally backsteps, but may also cause you to block incoming strikes (sound familiar?) 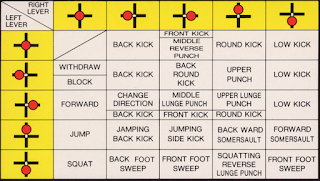 Moves differ by reach and speed, and the quicker ones never score you the full point. Any move is a bit risky; slower moves can be blocked, dodged, or just plain miss, exposing you to counterattack, and quicker, short-ranged moves require moving in close, risking a hit from a long-reaching strike as you step in. The system is a little intimidating at first, with so much presented up front, and expecting you to memorize a matrix of unintuitive lever motions just to do basic moves, but basic moves is all you get here.

I soon found a strategy that let me win consistently for quite awhile.

Flip over the opponent, and the AI will invariably try to swat you out of the air. And nine times out of ten, it will miss. Then you can position yourself in just the perfect spot to deliver a back roundhouse to the face for a full point. Or if you land too close, you can use a quicker move for an easy half point. Even if you screw up and completely miss, you can still sometimes salvage the half point in the ensuing melee, and it's no tragedy if you fail. The AI rarely uses full point moves on you, so you only need this gambit to succeed two or three times to win the match, but you must fail four times to lose it.


This cheesy tactic got me all the way to 8th dan (that's how karate tournaments work, right?) where a 9th dan promptly beat my ass.


Karate Champ also has score-boosting minigames between matches, and likely inspired the same in Street Fighter & Mortal Kombat in the years to come.


So, even though Karate Champ doesn't really play much like what we expect of a fighting game, there are a lot of elements pioneered here. That universal side-view format where fighters face each other and nonsensically can somersault over one another but not walk around, controls being reversed depending on which way you face, a variety of punches and kicks, squatting, jumping, and blocking, minigames between matches, and multiple venues are all seen here. It even made me think of Mortal Kombat when the students applauded after winning the opening round in the dojo.

One crucial genre element not seen here, though, is competitive play. Even though the cabinet has a two-player mode, all you do is take turns against the AI. And that brings me to the "versus" version. 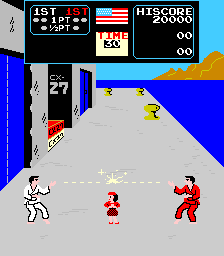 Titled "Taisen Karate Dou" in Japan and simply "Karate Champ" in the U.S., this is for all intents and purposes a different game from the original, though I have not seen a single game database catalog it as such. It plays the same, with some tweaks to the physics and AI, and more challenging minigames. The venues are completely new and much more varied, more in line with Street Fighter's urban rumbles than solo Karate Champ's tournament setting. The voice samples are a lot clearer, though the (still) goofy-looking referee sounds like a teenage boy with a stuffed nose in the U.S. version.

The main difference, of course, is the addition of two-player versus matches, in which the white and red karatekas fight a best-of-three format match to impress a girl who appears to be ten at the oldest.


I played a set of matches with "B," a somewhat avid fan of fighting games. I've cut out a few of the embarrassing early matches in which neither of us has any idea what we are doing, but left one of them in.

As you might expect, it's a very different game against an opponent who isn't bound to a rigid script. With one-hit knockdowns, it becomes a tense game of reading your opponent, anticipating their moves or baiting them into a mistake that you can exploit. When a plan doesn't work out, discipline tended to fail as I'd flail around, often executing the entirely wrong (and nearly as often useless) move in the ensuing panicked melee.

GAB rating: Good. This rating is for the "versus" variant; solo play gets "above average" as while the fighting mechanics are otherwise solid, the computer doesn't make for an enjoyable opponent for long. But the methodical, simulation-like gameplay holds up well in two-player mode, and is rewarding of smart, skillful play, as any fighting game should.