Game 248: The Battle of the Bulge - Tigers in the Snow

Early in the morning of December 16th, 1944, Germany launched its final counteroffensive on the Western Front, bombarding and overrunning allied outposts throughout the Ardennes where they were the thinnest, with the goal of dividing the allied armies and forcing a surrender. Despite the initial chaos and devastation inflicted on unaware and inexperienced defenders, this was a desperate move; the war had been going badly for Germany. The once dreaded Luftwaffe had lost air superiority, and German industrial and population centers faced air raids day and night. Italy had surrendered, Japanese aid was impossible, and eastern Axis signatories were quickly falling to the Soviet army, who were already planning their invasion of Poland.

In over a month of ferocious, close quarters combat, German resources were depleted, and thanks to stubborn allied resistance and air support, miserable roads, and rapidly depleting fuel reserves, little advancement was made on the line before they could regroup. Even so, to the U.S. Army, which had most of the battle commitment, The Battle of the Bulge was the second largest and second costliest campaign of the war, after the Invasion of Normandy.

Tactical Design Group's The Battle of the Bulge: Tigers in the Snow does not look terribly different from The Battle of Shiloh, produced the same year, and I'm sure it's running on the exact same engine. The graphics certainly don't scream "tigers in the snow" to me - why didn't they make the hexes white? The sprites could have been black, or perhaps some Apple-friendly color approximate of field grey and olive drab.

Although rated as an introductory game, Tigers in the Snow is significantly more complicated than Shiloh, with new features including:

A few aspects of Shiloh, in turn, are simplified. Battle tactics are now limited to defense and attack commitment levels without risk levels, and leadership mechanics including the possibility of killing group leaders is removed. Artillery is no longer a separate phase, but instead an expendable resource that merely gives you an edge in a sortie. Morale is replaced by "combat readiness," a simple metric that increases every turn that you don't move, and decreases every time you move. 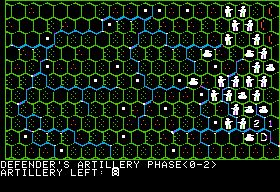 Unfortunately, one of the big weaknesses of Shiloh hurts all the more here for its added complexity. The primitive interface provides no way of manually querying unit strength, which is crucial information for making informed battle decisions. In the above screenshot, one of your units "D" is being attacked by enemies "1" and "2" across the river. Now you have to decide how much artillery to commit to the fight and how hard you want to try to hold the position without knowing the size of any of these units, not even your own.

If you paid attention, you might have noticed that these are all infantry units, but that's not nearly enough info. In the seconds before the attack, the stats of several divisions flash by the screen, but when the computer doesn't decide to move any of them, which is pretty common in this game, they flash by very quickly, and this does nothing to help you actually identify which divisions are attacking you, or to match this info to an occupied hex.

Shiloh had the same problem, but it's so much worse here, with more units to keep track of, and everyone up in each other's face from the beginning. The inability to check unit strength doesn't even make sense from a fog of war perspective - the defending unit should know how strong it is before committing to a defense strategy, and probably should have some notion of how strong the attackers are too.

In some ways it's when you're attacking. Here, you might know how strong the blinking target is, but it's not going to tell you how strong your infantry primed to attack from the west is until you've committed to attack. Even if you remember from the movement phase, there are five enemies it could attack, and the game simply asks "attack this unit" for each in sequence. You can't find out the strength of the fifth one until you've made a decision about the first four.

And when you attack with multiple adjacent units, it frequently alerts you that some attackers were unsupplied, which cripples their combat strength. This happens even when the unit meets the games's supply rules criteria - a general "supplies" variable decrements as you attack and defend, and as it gets smaller, this occurrence becomes more likely, but the actual formula for the odds isn't explained. This, too, is undetermined until you've already committed to an attack, which can ruin it. At this point, the best you can do is cut your losses by picking the least aggressive attack strategy.

To overcome these limitations, I wound up using each turn to take notes on each unit's strength as it was revealed to me, and then reloading a save from the start of the turn so that I could make informed decisions. The game allows saves at the start of each turn, so this didn't seem like cheating.

Attacking seems to rarely be worth it unless you have a huge tactical advantage. It seems better to hold in advantageous terrain like forests and cities and defend with aggressive tactics to sap away German strength until their units are weak enough to rout in one big counterattack. Artillery seems to eventually get replenished faster than you can use it.

At this point, the German army started running out of fuel, but curiously, even with the level at 0, this did not bring their units to a standstill. Sometimes a unit would be unable to move and lose its turn, as had sometimes happened before, but others would continue unimpeded. I assume that this is a random occurrence made more frequent as fuel reserves diminish, analogous to supply levels and attack effectiveness, and likewise, inadequately explained anywhere.


And that was the end, a major loss. In retrospect, the reason was clear - I did not heed the objective points enough, and foolishly assumed that I could win the melee in the north and drive the Germans out. But the early grab of Bastogne and Rochefort earned them 150 points per turn, Marche another 50, and even the two units that spent such a long time camping in the southeast corner earned them another 12 points per turn.

To be fair to myself, the game makes forgetting about objectives far too easy. Objective cities aren't indicated on screen at all - they're all just dots, without anything to differentiate an objective city from a minor one. When a city is occupied you can't even tell there's a city there, which is what happened for almost the entire game. You wouldn't even know the Panzer in Bastogne was occupying any city, let alone one worth 100 points every turn that it lingered, without constantly cross-referencing the map in the paper manual.

And that's really the crux of this game's big problem - it keeps crucial information from you, for no good reason. The Germans have no issue recognizing your weakest units and surrounding them with exactly as much force as it takes for a total kill, but you don't even get to see your own units' strength until it's their turn to move, you don't get to see the enemy units' strength until the movement phase is over and you're ready to attack, and you don't get to find out if your units got supplied until you've already committed. And the solution is obvious - an "intelligence mode" that lets you move a cursor around the map and query individual hexes for terrain and unit data (including the names of important cities instead of just calling them all "town") would be so much more useful than my approach of playing each turn twice, once to awkwardly gather intel and once to make informed decisions.

Part of me wants to go back and try again, this time fighting tooth and nail to stop the Germans from occupying Bastogne, to see if I can turn a defeat into a victory, but I've also spent a lot of time already on a game that wasn't that much fun, in a genre that I don't especially like anyway. Is anyone interested in seeing another go? If not, then I'll just move on to the next SSI game Computer Quarterback (for all intents and purposes the debut of AIAS Hall of Famer Danielle Bunten Berry) and give this one a GAB rating of Average for the double-edged sword of its complexities and an interface too primitive to suit them.