SSI's earliest products are all over the place in terms of complexity. First there was Computer Bismarck, certainly a complicated game by BASIC strategy standards, but self-rated Intermediate in SSI's catalogs, and later by CGW wargame retrospectives.

Their second product, Computer Ambush, is an impossibly detailed simulation of hand to hand combat in WWII, anticipating games like Commandos with its stealth mechanics and roster of characters with strengths and weaknesses, Combat Mission with its simultaneous order execution system, and Frozen Synapse with its incredibly flexible orders system, where you can give men specific orders and lay out contingencies using a terse programming language-like syntax. All of this was done in 1980 in BASIC, at the cost of turns taking up to 3 hours to resolve. This one just seems too hardcore for me, plus the original version of the game doesn't seem to exist any more, only a remake which doesn't interest me quite as much from a historical perspective.

Addendum - In June 2021, The Wargaming Scribe, who is hardcore enough for it, covered the 1982 remake. Check it out.

A third product of 1980, Computer Conflict, is a collection of two BASIC wargames, and both are about as simple as they get. The first, "Rebel Force," is the earliest known game of Roger Keating, who would later found Strategic Studies Group. 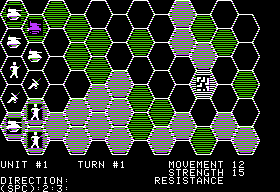 It's a very basic hex-based wargame, where apart from movement, all unit actions are performed by the space bar, and determined by context. Possible actions are:

Your goal is to conquer the city, done by moving a unit onto it and withstanding the enemy's counterattack for several turns. The healthier the unit, the quicker it falls. The enemy's goal is to route your army, but can also score points by delaying you, or by pushing troops to the left edge of the map. Once either goal is attained, the margin of victory is determined by score differential.

The only enemies you face are militia and anti-tank guns, whose positions are unknown until you move a unit adjacent to them. Tanks have an advantage against militia but are weak against anti-tank guns, heavy troops (indicated by the sword) have an advantage against the anti-tank guns, and infantry have a slight advantage over either. Combat odds are further modified by terrain - gray hexes are better than black, and green better than either, but both cost more movement points to enter - by the relative strength of the units, and by numbers, as a unit's effective fighting strength is bolstered if more than one friendly unit is adjacent to its target.

Some of the hexes are mined, and when you move a unit in, you'll know. You'll see an explosion, your unit will take damage, and the hex will turn solid violet as long as the unit remains. If it's lightly mined, then you may as well de-mine it so that next turn you can pass through unhindered with the rest of your army. If it's heavily mined, then you also might as well de-mine it, but this will probably take several turns with your weakened unit, which is now useless in combat to boot. At least this way you won't accidentally move a healthy unit onto it again.

That's pretty much it. Units can't stack or pass through each other, so quite often some of your units will be stuck behind a logjam of friendlies locked in combat or de-mining for several rounds, which is a disaster on all but the easiest scenarios.

There are five scenarios in total, each playable in about twenty minutes. Three of them force you to play aggressively, because the enemy constantly receives reinforcements, while you never do. As the combat drags on, your army gets exponentially weaker - diminished strength causes it to fight less effectively, increasing the amount of damage taken even under the best circumstances, making it even weaker. While you can forfeit a unit's turn to repair damage, this is so slow that it's not even worth doing - better to cause some damage with its last breath, or to retreat to deny the enemy victory points from its otherwise inevitable destruction.

I managed to win a decisive victory on the second-hardest scenario, but only because absolutely everything went perfectly; I avoided most of the minefields, enemy units didn't form into deadly combinations, and in the end, when I got a heavy troop into the city at full health, the counter-offensive force's militia walked right into my tanks, and the anti-tank guns walked right into my infantry and heavy troops, fortified in the green and gray hexes. On the hardest scenario, the best I managed was a draw.

So that's Rebel Force, but what about the other game, Red Attack? 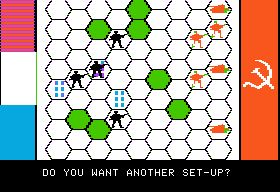 While Rebel Force is strictly a singleplayer game against the computer, Red Attack is strictly two-player, with one player controlling a USSR invasion force, and the other a small militia defending the village. And it's even simpler than Rebel Force.

The scenario at first glance looks totally lopsided in favor of the Soviets. And in my experience it is, but not for the reasons you might think. A game lasts five rounds, and the Soviets win by occupying two of the three towns at the end.

I played some rounds with "B." In our first round, he played attack, and I played defense.

As it turns out, tanks do not simply roll over infantrymen. All units have the same combat strength; tanks just move faster, 4 hexes instead of 3. Furthermore, it's very uncommon for units to be destroyed outright. The worst thing that usually happens is that a unit is forced to retreat. Even when a unit is attacked by three others at once, it seems like more often than not the defending unit holds its ground. 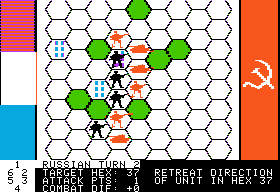 So wait, I did say it's lopsided in favor of the Soviets, right? Well, the thing is, the Soviets have plenty of opportunities to fight, they tend to have control over the matchups, and they only need a few lucky victories in order to win the game. Winning a fight as a defender doesn't help you that much - push them too far away from the cities, and they can use superior mobility to flank you. In fact, "B" caught on quickly that he could just take the undefended backwater city without even fighting for it, and then his infantry company became the one that's hard to move.

We replayed and swapped sides, and found the results to be about the same.

GAB rating: Below Average. Computer Conflict makes good use of AppleSoft BASIC graphics, but the gameplay of its two games is unbalanced and too simplistic to be engaging.

Of SSI's initial offerings, Computer Bismarck and Computer Ambush remained in the catalog for years to come, but Computer Conflict was quickly relegated to the discount section, its outstanding copies sold at a third of Bismarck/Ambush's price and shipped in Ziploc bags.

In 1981, Keatings would develop Operation Apocalypse and Southern Command for SSI, both of which also wound up in SSI's bargain bin. But the next year, he designed the Advanced-level Germany 1985, the first of the "When Superpowers Collide" series, depicting a hypothetical armed conflict between NATO and Soviet forces in the titular setting. This was followed by RDF 1985, Baltic 1985, and Norway 1985, all of which are also rated Advanced. I feel just a little bit bad that I'm playing this underwhelming budget disk as the sole introduction to Keating's career, as these games are probably more representative of his body of work at SSI, but I've got to have limits on how far into the weeds I go. I could easily spend the rest of the year exhaustively covering SSI's volume of works from 1980 to 1983 as an amateur grognard, but I don't think anyone wants that, least of all me.