Game 247: The Battle of Shiloh

I am a damned sight smarter man than Grant. I know more about military history, strategy, and grand tactics than he does. I know more about supply, administration, and everything else than he does. I'll tell you where he beats me though and where he beats the world. He doesn't give a damn about what the enemy does out of his sight, but it scares me like hell.
- General Sherman, as quoted by James Harrison Wilson

The Western Theater of the American Civil War gets less popular attention than the Eastern, where Lee's Army of Northern Virginia held off attempted invasions of Richmond for years, even after a northward advance was decisively defeated at Gettysburg. The Western Theater, in contrast, was steady push southward by Union forces through Kentucky, Tennessee, and Mississippi, leading to Sherman's March to the Sea. The Battle of Shiloh, fought in April 1862, could be seen as its most crucial battle, as it was the Confederate Army's last realistic shot at stonewalling Union advancement, and its failure ultimately cost them the front, splitting the confederacy at the Mississippi.

The two day battle began on April 6th as General Johnston led a massive surprise attack on roughly 40,000 Union troops encamped on the Tennessee River's west bank in an attempt to drive them out of the state. In a day of fighting, in which Johnston was killed in action, Grant's forces were pushed back to a defensible position, but were joined at night by fresh troops from Ohio, and counter-attacked the next morning, forcing a withdrawal. Shiloh was the bloodiest battle of the war to date with over 20,000 casualties, far exceeding all prior battles combined. The confederates lost their hope of holding Tennessee, and morale never recovered from the death of Johnston. Grant, however, faced reprimand for being caught off guard and for his failure to turn the confederate retreat into a rout. 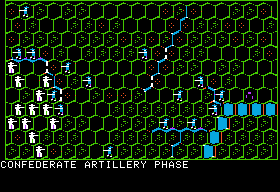 SSI's The Battle of Shiloh, the first title by their internal Tactical Design Group, is rated as introductory level in their catalogs, but is in ways more serious than earlier offerings that I've looked at, especially coming from Computer Conflict. Simulated features include:

This complexity comes at a cost, now requiring 48KB on the Apple II, up from the 16KB required for previous games. Simultaneous versions for Atari and TRS-80 computers only require 32KB and 16KB respectively, which I'm guessing is possible because of the Atari's more memory-efficient tile graphics and the TRS-80's lack of them.

After a disastrous first run of the game, in which the confederates wore down my fortifications and overran the river landing so thoroughly that my reinforcements couldn't even cross it to join the fight, I tried again with a new strategy - keep as many of their units as possible adjacent to as few as mine as possible, in order to maximize the potential of my artillery, and minimize theirs.

The rules of artillery are that during a bombardment phase, any unit adjacent to an enemy may be targeted, but only once per phase, and any other units are safe. I'd almost always use light bombardment - it's the most efficient in terms of damage per shot, but occasionally I'd use medium if I had more ammo than targets. My own units would decline to attack, and when they were inevitably attacked themselves, I'd use tactics to minimize my losses.

Any time close combat occurs, the attacker picks a single target, and may attack with any adjacent units that haven't attacked yet that turn. Both sides then pick a combat strategy, from a selection of four risk levels and four tactics, allowing for sixteen possible combinations. I'm not really sure what a "bold retreat" or a "cautious all-out attack" is supposed to mean, but from what I can tell, more evasive tactics mean fewer men killed on both sides but more chance of giving up ground, and higher risk level simply means more death on both sides, with a slight bias toward the opponent.

After nightfall, the next turn began on day 2. I started attacking more aggressively - kill ratios were generally in my favor as long as my attacking force was stronger, and aggressive tactics with safe risk levels seemed to produce the best results. This did mean having to pay close attention to enemy brigades while they moved, as this is your only opportunity to observe enemy unit strength values. As my artillery strength grew, and targets of opportunity diminished, I found I needed to use medium bombardment more regularly and even heavy sometimes to ensure my ammo didn't lie unused.

And that ended the game. I roughly estimate that a single combat point represents about 35 men, and if this is accurate, then this battle simulation was quite a bit deadlier than the real thing, with nearly 30,000 casualties on my side, and 26,000 on theirs. Maybe I could have done better if I had played more defensively - day one had been a bloodbath, and much of day 2 was wasted trying to deploy reinforcements to the overrun landing. If I had withdrawn my troops to more defensive positions and focused on minimizing casualties rather than trying to optimize an artillery duel, could I have been in a better position to fight on day 2? I could have also probably executed my original strategy better too - perhaps if I tried again, I could pull it off more efficiently.

But I don't really care to test this theory, because The Battle of Shiloh is painfully slow. I guess it could be worse - after all, Computer Ambush allegedly could make you wait hours for a single turn to resolve, but Shiloh keeps you waiting several minutes between turns as the computer slowly, slowly ponders its moves and then erases and redraws its pieces all over the screen nearly as slowly. Such is the cost of using BASIC, I'm afraid.

GAB rating: Above Average. I am impressed by the balance between accessibility and depth that SSI struck here, and can tolerate some weird game rules (like the arbitrary-seeming artillery mechanics). I just wish it played faster, and that some of the interface quirks were improved, like not having a way to see enemy unit strength during your own turn.