Electronic Arts. One of the most hated companies in America, EA has a Wikipedia article exclusively on its criticism, a dishonor it shares with plutocratic megacorporations like Facebook, Amazon, Walmart, Disney, and Coca-Cola, but not with a single other company whose primary business is video games. Personally, I'm not completely convinced that EA has been singular in unethical depravity compared to similarly sized publishers in the industry, or that they're guilty of starting deleterious business trends so much as following them, but nevertheless, it's easy to view modern EA as a soulless corporate machine that puts profit before quality.

Unlike so many contemporaries that they outlived, EA never had a humble beginning. Founder Trip Hawkins, already quite wealthy with windfall from Apple Computer's successful public launch and with connections to investors, was able to finance EA as a major publishing house and begin operations almost immediately.

So, EA had been corporate from the start of its existence, vertically integrated and beholden to investors, but perhaps not completely soulless. Hawkins had a vision of auteur-driven production, where developers would operate under managerial oversight but otherwise have free creative reign, would be provided with tools, support, and branding, and would be marketed not just as authors, but as celebrities. "Electronic Arts" was an apt name for this partnership. Among their first products was a reissue of Bill Budge's Pinball Construction Set, which had been self-published the year before to disappointing sales, but picked up a second wind thanks to aggressive marketing and ports to Commodore and Atari computers.

The first game that EA was truly involved with in its creation, was Hard Hat Mack, by high school students Michael Abbott and Matthew Alexander. 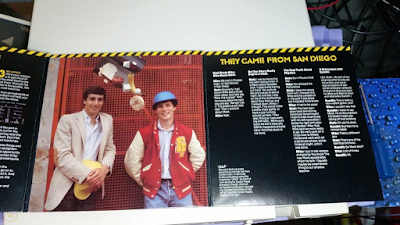 EA honestly had some pretty good packaging. Infocom had its folios packed with photos, documents, and quasi-diegetic manuals, and Origin Systems had its cloth maps and manuals full of illustrations and lore, but these were unusual. Usually, especially for arcade-style computer games, all you got was a box with a picture on the front and a printed page of instructions inside. Cassette-based games, still common in 1983, didn't even give you that. But EA's early games came in cardboard album-like sleeves with studio-grade artwork on the inside and out, color photos of the authors, and gameplay instructions.

Hard Hat Mack's sleeve unfolds to give you a level-by-level breakdown of gameplay with color screenshots, an interview with the M.A.'s, and on the last leaf, a pretty hilarious cast overview featuring the protagonist and villains - the hard working, beer drinking, Hoffer-reading, non-union construction worker Mack, the vandals trying to to hinder their neighborhood's gentrification by sabotaging your job, and worst of all, those buzzkills from OSHA who will stand at nothing to shut down your work environment. Did I mention this was the dawn of the Reagan era?

I played the Apple II version. Of the initial three versions, the Apple II was probably the least well suited to arcade action games, but was nevertheless the target platform which the Atari and Commodore versions were ported from. 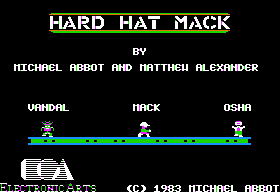 As with other Apple II platformers, you can play with the keyboard or joystick, and you definitely want to use joystick controls, because the Apple II keyboard, only able to tell when a key is pressed and not when it is released, means that keyboard controls have an odd scheme of "press left/right to START walking and press another key to stop."

Level 1's goal is to pick up girders around the frame and place them in the gaps, and then grab the rivet gun to fix them in place. An enemy - either a vandal or OSHA (picked randomly, there is no difference) chases you around, and some machine fires deadly rivets all over the site.

The controls are highly responsive, to the point of feeling twitchy. You've got to be REALLY precise with your jumps, especially when leaping onto the springboard. The human enemies aren't too bad - they are predictable, only traverse levels by climbing the chains, and mainly just serve to annoy and deny you ground.

The real problem is the rivet machine, which fires at predictable intervals, but at unpredictable bouncing trajectories. Sometimes it comes out so fast that there's no way you can possibly react.

And so I found that the springboard is the safest way to get up and down the framing. The elevator is just in too much harm's way, and I don't know if you can control where it takes you to.

The top floor also has a collectable, and a bell you can ring, but the latter is useless. It summons the elevator to the floor below you where you can't reach it, and to get there you've got to walk all the way back to the chain. If you were running away from an enemy and hoped to summon a getaway ride, tough luck - you are now trapped in a corner.

Level 2 is all about timing.

You've got to collect all of the toolboxes here. The hardest part is getting the one on the ground floor, and do that, you've got to walk under the crushing pounder, wait for the patrolling vandal/OSHA to climb up the ladder, turn around, and climb down, and then follow him closely, jumping over the dynamite, grabbing the toolbox (and the bonus item too if you're brave), and turn around and retreat before he does the same and gets you.

The toolboxes on the upper girders are comparatively simple. Once you get them all, the electromagnet starts moving, and you must jump on the top conveyor belt in time to ride it to the top. Mistime and you burn.

Level 3 tasks you to gather boxes and drop them into rivet machines. Take care not to fall in.

Here, all these moving parts take a toll on the old 6502, and there is noticeable slowdown.

The hardest part is snatching the boxes out from under the patrolling vandals/OSHAs, and to do this you either need to figure out their movement patterns and time things well or learn how to stand on the extreme edges of the platforms where you're out of their hitbox range. Preferably both.

The rest of it wouldn't be too bad except for the fact that jumping off of the lift is really treacherous. The timing window is unreasonably precise, and a mistime is deadly.

The item on the top girder seems pointlessly placed. There's no challenge or risk in getting it, and in fact it seems like it would be impossible not to get it after picking up the box on the conveyor belt.

Beat this level and the set just repeats, only now level 1 has two enemies instead of one. As far as I can tell, this is the only thing that changes.

Weirdly, you can start on any level you like, and on one hand this ensured I could see all three levels without needing save states, but also meant I had no incentive to master the first two.

GAB rating: Bad. Hard Hat Mack is impoverished of meaningful content - only three levels, none all that interesting, just much too difficult in all the wrong ways. I was not challenged - I was frustrated and annoyed with the impossibly precise timing you need to stick what should otherwise be simple jumps. I guess the animations are kind of cute, but I didn't have any fun playing Hard Hat Mack. I did try the Atari version too, and it fares a bit better, but not nearly enough to warrant my seal of approval.

Matthew Alexander's career in video games comes to a stop after Hard Hat Mack, until 1995 where he contributed to three games in the 90's in a supporting role, and then disappears again until serving as part of the production team in 2011's Star Wars: The Old Republic. Michael Abbott, on the other hand, continued designing games for EA until 1992, after which he worked as designer/producer for various companies including Tradewest, Sony, and Williams until 1997, where he took an executive role at Midway Games.