Even though almost every Universal game is derivative, I have to give them credit for not just making the same game again and again, tempting as it must have been once they hit gold with Mr. Do! Cosmic Avenger took after Konami's Scramble, Lady Bug after Pac-Man, Mr. Do! after Dig Dug, and Mr. Do's Castle, their first true sequel, takes after... their own Space Panic? 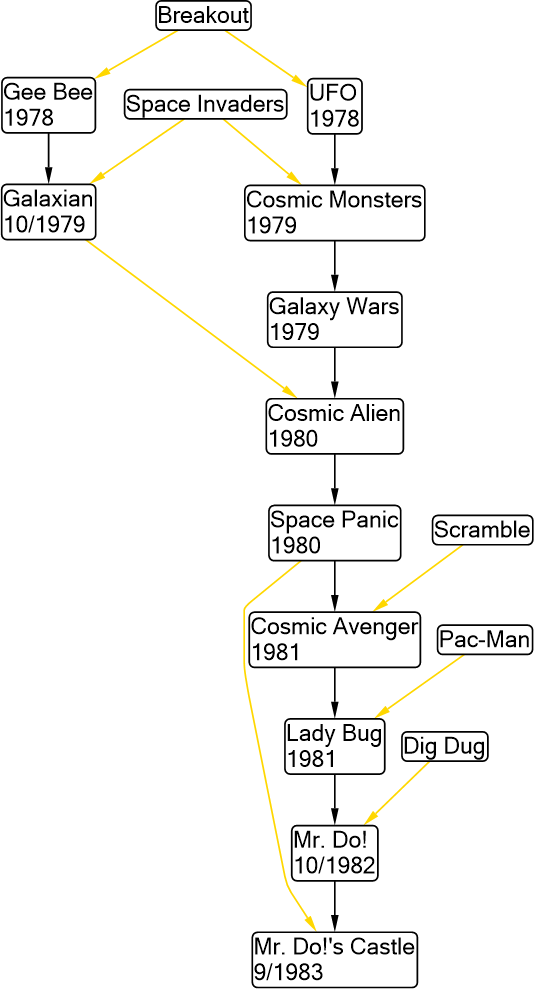 Space Panic, even though it's one of Universal's few original designs, and considered by some to be the first arcade platformer ever, was a pretty miserable experience, with unreliable controls, inconsistent gameplay mechanics, and excessively random enemy AI in a gameplay loop that depends on you being able to manipulate their behavior. Mr. Do's Castle has all of these problems too, and yet, it improves just enough to be a pretty fun experience, if a sometimes frustrating one.

Mr. Do's apparently gotten himself a sweet castle, and finds himself invaded by unicorns out for his blood. Sometimes a clown just can't catch a break.

Trading his superball for a hammer, Mr. Do can't reliably kill unicorns with it directly. You can try - sometimes it works, most of the time it just knocks them back, but there's a pretty good chance that you'll miss entirely and get killed. The simplest way is to smash the floor out so it falls and crushes the unicorns below, but for that to work you'll need a good lead on them and also puzzle out a way to position yourself so that their pathfinding makes them walk underneath you.

The unicorns can also be slowed down by breaking the floor behind you so that they fall in, buying you a bit of time before they wiggle out and continue their pursuit. You can even whack them over the head, making them fall down a level, but I rarely found this technique useful; it makes them angry and faster, and leaves a hole in the floor of your castle, which ultimately impedes your traversal more than it impedes the unicorns'.

This technique is where Mr. Do's Castle feels closest to Space Panic, but where in Space Panic this was difficult but necessary to pull off, here it's easy but not often very useful. A stuck unicorn blocks your movement, but not other unicorns, so it won't do much to get a conga line off your tail, nor does it often trap individuals long enough to kill them.

A more useful technique is to employ skull trap bridges. There are several methods of triggering them, but the most basic is to drop a skull on one side while being pursued, keep crossing the bridge, drop a cherry block behind you, and then drop the other skull block while a unicorn is stuck in the hole you just created. Preferably while another unicorn or two is stepping on its face.

This collapses the bridge, sending any unicorn in the gap you made crashing down with it. Occasionally other unicorns standing on falling cherry blocks get crushed too, but it's unreliable. This, for some reason, leaves a perfectly usable bridge behind, so you'll want to make sure you have an escape plan before doing this. All too often you can find yourself stuck between two survivors on both sides of the bridge and with no way out.

The diagonal ladders can be pushed from the top to change their orientation, effectively reconfiguring the maze and making the unicorns alter their paths. This is often crucial to setting up an effective trap. It reminds me a lot of Lady Bug and its revolving doors that reconfigure the maze in a similar manner.

To really score big points, though, you need to smash the three key blocks. This releases a shield, which you can collect to turn the unicorns into the EXTRA-spelling alpha monsters.

Tempting as it may be to camp by the shield and wait for the unicorns to get close before snagging it, it's usually better to get it as soon as possible. The longer you delay, the less time they'll be transformed (and the faster the survivors of your murder spree will be), so it's more effective to get it quickly and then hunt them down.

Take too long to clear a level, and you'll start having to deal with deadly blue unicorns, who ramp up their speed fast and can multiply. This happens very soon after the scene is down to its last unicorn, so always have a plan to kill the last two quickly.

GAB rating: Good. Mr. Do's Castle is a tough, fun, and often satisfying puzzle platformer that mostly fixes the Space Panic formula by completely revamping the gameplay. I mentioned earlier that the weaknesses of its inspiration aren't completely gone - there are no dropped inputs, but occasionally the game interprets them wrongly, especially taking "up" not to mean "climb up the ladder a few pixels to your left" but "walk off the ledge to your right," which is a frustrating way to lose a life. AI, though a far cry from the infuriating randomness of Space Panic, can sometimes behave inconsistently, throwing off your best laid plans, and collision detection can be maddeningly inconsistent, with even the attract mode demonstrating a method of crushing unicorns that rarely works in actual gameplay.

Compared to Mr. Do!, Mr. Do's Castle is slower and more methodical, which isn't necessarily a bad thing. But where Mr. Do's gameplay often led to crazy sequences of events unfolding to your benefit in unexpected ways, Mr. Do's Castle is more about planning moves out, and when something unexpected happens, it usually throws a wrench in your plans. Or less often, a desperate tactic that usually fails, like hitting a unicorn directly with your hammer, just happens to work when you had no other choice.

Mr. Do would return for two more games in 1984; Mr. Do's Wild Ride, and Do! Run Run, which in Universal's fashion played little like each other or prior games, but would never be seen again outside of a licensed Neo Geo remake in 1996. Universal would bow out of the video game industry in 1985 and continue their primary business of pachinko and slot machines, which still operates today.

Email ThisBlogThis!Share to TwitterShare to FacebookShare to Pinterest
Labels: Universal