Buy Crystal Castles and about 90 other Atari games in the Atari Vault on Steam:
http://store.steampowered.com/app/400020/Atari_Vault/

What if Pac-Man was axonometric 3D, had a completely forgettable cartoon bear antagonist, and kitchen sink design that threw as much crazy nonsense as the designers could cram into its PROM instead of polishing a handful of elements to perfection? 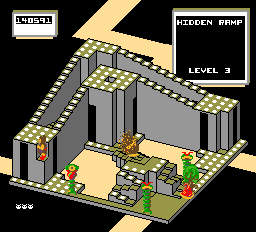 I've played Crystal Castles at ACAM, and the cabinet is a sight to behold, with its striking M.C. Escher-inspired artwork all over; the sides, the front, the speakers, and the control panel, where a glowing red Atari trackball sits in right in the middle, standing out from the icy cool design. This, of course, is lost playing on an emulator.

The game is set over 36 castles divided into nine levels, plus one final level consisting of a single castle. You control Bentley Bear with the trackball for movement, which feels oversensitive and slippery at first, but it's crucial for survival later on when enemies move incredibly fast.

Unusually for a golden age arcade game, Crystal Castles has a definite ending and doesn't loop once you beat the final bastard of a level. It also has continues of a sort; three secret warp zones to skip most of the castles, and the locations are revealed when you reach the level that the warp skips to. The third and final warp goes to level 7-1. Good luck beating the last 13 castles one one set of lives - I needed save states to pull this off, almost on a per-level basis, though I might have been able to beat the game without saves on 8-4 onward if the final castle weren't clown pants ridiculous.

All 37 castles aren't unique, though. In fact, there are only 16, and levels 5 through 9 consist almost entirely of repeats, the sole exception an "Impossible Staircase" stage in level 9.

GAB rating: Average. To answer my own rhetorical question posed at the start, it would be overbloated and would wear out its welcome shortly after you've seen its whole bag of tricks.

As for Bentley Bear, Atari would put him on furlough until 1995, when he'd be revived as the mascot for Atari Karts.