Temple of Apshai: Plunder and destruction

One level of Apshai remained. The lowest sanctum, accessed through submerged tunnels, from which none had ever returned, was therefore where the richest treasures must remain.

I would not be the first to return. Right away, I got wrecked by a solitary ant man guard, and for the first time, my body eaten by the denizen's monsters. 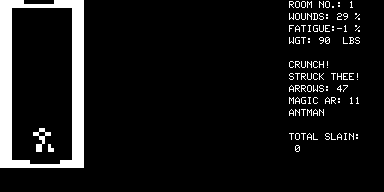 I allowed myself to cheat and boost my stats a bit through abusing the character importing program. By increasing my strength from 12 to 15 and dexterity from 15 to 16, I found I stood a chance against these level 4 guards while still leaving them a challenge. Anything less than this and I was ant food. With 18 strength, 18 constitution, and 15 dexterity, I just got hit too often and too hard. With 14 strength, 18 dexterity, and 18 constitution, the fight dragged on too long, I got worn out, and finished off. 15 strength and 16 dexterity seems to be the minimum viable build here.

I also found that with this strength boost, I could finally tramp through the halls in full plate without tiring myself so quickly, though I still could not wield a hand-and-a-half sword, and to wield a two-handed greatsword without a shield would mean death for certain. 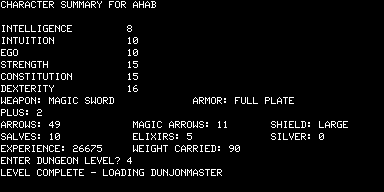 Even with these artificially boosted stats, I wasn't guaranteed a fair shot. During one trip, a giant amoeba spawned right at the entrance and one-shotted me. At this point I was past caring about fair play and just re-imported my character whenever he died if he was eaten or "rescued" by the body-looting dwarf.

This final area seemed to be a barracks of sorts. Many of the halls and tunnels were vanilla-scented, indicating presence of ant-men, but not nearly as strong as the ones encountered in the first two rooms. In fact, two large rooms in the west end, overpoweringly vanilla-scented and full of cots and footlockers (but nothing of value), had seemingly endless respawns of ant-men who collectively gave me no trouble at all as I killed 32 of them in one room before retreating to restock my arrow supply. In the northwest corner, a solitary cobweb-infested bedroom was infested with giant spiders that I knew better than to engage. An armory near these rooms contained a mithril-fused sword protected by a spear trap, but either this sword was a worthless non-enchanted broadsword, or else a bug just caused me to lose my magic enchantments.

The manual also cautioned me that traps here were deadlier than ever. That spear trap I mentioned? It's described as three spears thrusting out at waist level. The needle trap that once protected chests and closets is replaced by a stiletto with a dark stain at the tip. The pit trap that went from a ten foot drop to a ten foot drop with spikes at the bottom is now a twenty foot drop with spikes at the bottom. There's also a new flame trap here for good measure.

Most of the halls and rooms between them were strewn with junk, but one large room not far from the entrance, filled with hieroglyphics and braziers, had a mantis statue with large rubies for eyes, worth $3000 each. Taking them woke up the statue, which killed me in a somewhat drawn out fight where it hit me infrequently but hit hard.

The doorway to the east opened to a closet with a far more lavish (and considerably more massive) treasure of platinum crosses, candelabras, and offering trays, worth $21,500 total and only guarded by weak skeleton bats. Further down a corridor, a door south led to a rotting library with a single good book on a trapped shelf, which I took and discovered upon my return that my constitution had risen by one point.

At this point there were still 20 rooms remaining to be discovered, and I had explored every passageway except for a secret door east of the level entrance. Behind this lay a particularly nasty ant-man guard, who I couldn't beat even with my inflated stats. 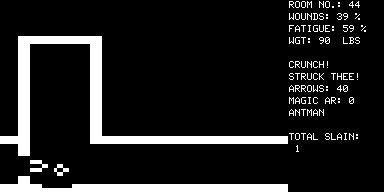 In fact, I tried completely maxing out my stats, and it still killed me. Parlaying never seemed to work either, which at 8 intelligence I hadn't bothered trying previously, but even with 18 intelligence it still didn't work against any of the ant-men patrolling this level. And if you can't parlay with ant-men, who are the closest thing you'll find to human beings, who would you? The spiders?

I pulled out all the stops for these last few rooms.

After fighting more overpowered ant-men, a southern alcove with an obviously false wall led to a tiny closet with yet another opulent treasure; 60 gold coins, 15 emeralds, two diamond stickpins, two gold chains, in total worth $12,600, and a pair of magic boots that the manual said would let me run faster, but I couldn't discern any effect. Beyond the alcove were a series of stone back-passages running through the north end of the level with a bunch of secret doors leading to places I had already explored. Junk and loose gold coins were littered throughout, and at the very end of this series of passages was one last room in the far north-east where some giant spiders guarded a bag (of holding apparently) containing 10,000 silver coins.

My final mop-up found that in the northwest spider-infested bedroom there was a corpse with 65 gold coins, and a secret door to a much smaller bedroom with giant amoebas and a trapped chest containing 84 platinum pieces and 55 small diamonds worth a total of $13,900 and a magic cloak. One final hidden room, its position made clear by the mostly-filled map, had nothing but a gold plaque.

The very last thing I did before leaving was to lift the rubies from the mantis statue and kill it.


GAB rating: Below Average. There's a lot that I like about this game. The best part is the exploration, which is far better than the likes of Akalabeth, better in some ways than Wizardry, and the room descriptions are a big part of this, but even without them, the dungeon design and layout is clever, interesting, and feels lived-in - it's kind of incredible that Freeman & Connelley managed to pull this off with such primitive building blocks! Combat is pleasingly tactical, and demands mastery of both a nuanced fatigue system and a tileless movement & position system unlike anything else you'd see in the CRPG canon for years to come. There's a consistent atmosphere of dread, again helped by the manual's room descriptions, and it suits the sparse, abstract visuals well.

But let's be real. Dunjonquest is a technical nightmare. From the slooow screen updating routines that bring everything to a halt for half a minute whenever you enter a new room, to the bugs, the limitations, and gameplay mechanics that simply don't work, it will try anyone's patience. I don't mind having to keep the manual handy to read room and treasure descriptions. I don't mind having to manually re-type a character sheet to "resume" a saved game. I don't mind being given free reign over my character's stats and trusted not to cheat. I don't even mind having to keep track of my own silver (granted, I didn't bother doing this for long). But I do mind it when my shield just disappears for no reason and the innkeeper won't even sell me another, or when the game outright crashes. The various aspects of the game that obviously just don't work correctly also gives me little faith that any of the invisible mechanics were working as intended as well.

I also wish the RPG elements were a bit better developed. I wasn't expecting Wizardry, but here, once you roll a character, there's almost no meaningful way to improve it. Silver is worthless once you have enough to buy full plate, and the only useful items I ever found in the dungeon were a +2 magic sword, a few magic arrows, some healing elixirs, and a constitution-increasing grimoire, all of which except the book I had found in the first level. Experience points don't even do anything, as far as I can tell. The endgame content seems to be made for cheaters, as even with maxed-out stats, and weapons and armor enchanted far beyond fair means, I was unable to survive it. At the very least, this doesn't bode well for Upper Reaches of Apshai, which as a data tape uses the exact same engine, with presumably the same limitations.

An Atari 400 port in 1982 runs a whole lot faster, offers tiled graphics and sprites, and from a cursory look improves on several of its interface problems. I estimate that my appraisal of this version could have been bumped up to average, assuming it fixes the most serious bugs.
Email ThisBlogThis!Share to TwitterShare to FacebookShare to Pinterest
Labels: Epyx