Automated Simulations and the road to Jumpman

One of the things I've enjoyed exploring for Data Driven Gamer is the links between games. Several of my posts covering the earliest years of gaming's history explored some complex, non-linear webs of continuity in three dimensions; the company, the talent, and major influences.

In 1982's lineup, most of these links are pretty straightforward. Wizardry II is a successor to Wizardry I, made by the same people, and without any obvious links to previous games except for those that influenced the first one. 1983's Gyruss was developed by Konami programmer Yoshiki Okamoto, who did Time Pilot the year before, and its lines of influence can be traced fairly linearly back through Galaga, Galaxian, and Space Invaders. Ultima II follows Ultima, Zork III follows Deadline and Zork II, Popeye follows Donkey Kong Jr., and so on. The lines get slightly more complex when looking at third-party Atari developers Activision and Imagic, but only slightly, and most of the rest have straightforward pedigrees.

With a few of the 1983 whales, things start to get complicated again. Until now, I have yet to play 1979's Dunjonquest: Temple of Apshai despite being considered a fairly important title by most sources on the subject of CRPGs. It's a bit surprising then, that while there are two upcoming whales of 1983 that move me to finally play this game, neither are RPGs. These games are Jumpman, by Dunjonquest publisher Epyx, and Archon: The Light and the Dark, by Epyx's co-founder and two other former members who had contributed to the series in some capacity.

A condensed version of the history - in 1978, D&D buddies Jon Freeman, a boardgame designer, and Jim Connelley, who had just purchased an 8KB Commodore PET, found Automated Simulations and create their first game, Starfleet Orion, by the programmer/designer division of labor that we've seen so often before already. In 1979, their focus shifts to the TRS-80, as Starfleet Orion and its sequel Invasion Orion are ported, and is the lead development platform for Dunjonquest: Temple of Apshai. It's a success, and in the months to come, they release two more Dunjonquest games "The Datestones of Ryn" and "Morloc's Tower," and are marketed as "MicroQuests" indicating smaller adventures. In late 1980, a proper sequel Hellfire Warrior comes out, along with a spinoff series titled StarQuest. In 1981, both Temple of Apshai and Hellfire Warrior receive expansion scenarios titled "Upper Reaches of Apshai" and "The Keys of Acheron," as well as an action-oriented monster movie-themed game Crush, Crumble, and Chomp!

All of these games use a variant of the old Apshai engine, and Freeman feels development is hamstrung by Connelley's refusal to move on from the aging TRS-80. These games have all been ported to more advanced systems, and the Atari computers do the most to enhance them with its limited support for tiled graphics, but their potential is clearly held back by Connelley's TRS-centered development cycle. Freeman leaves and founds Free Fall Associates with his wife Anne Westfall, credited as a tester for multiple Automated Simulations titles, and Paul Reiche III, credited as the designer of The Keys of Acheron. In 1983, they release Archon.

Automated Simulations continues to operate without them, and releases several more games of no consequence to this blog, until in 1983, they release a Donkey Kong-inspired platformer, Jumpman, under the "Epyx" label, which is such a big hit that they permanently drop their old title and are henceforth only known as Epyx, and their RPGs and strategy games take a backseat to action and arcade games. Ironically, Jumpman was developed principally for the Atari 400 computer, and does not even run on the TRS-80. 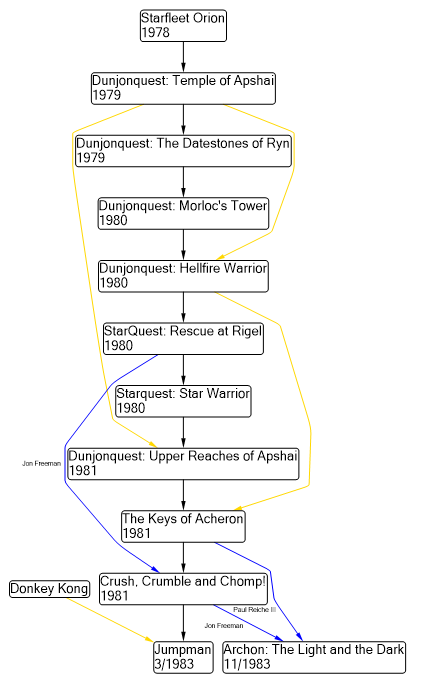 This graph can get even more complicated when one considers that Archon was published by Electronic Arts, who also published a few more major titles of 1983, including M.U.L.E. by Dan Bunten, who previously worked for SSI.

This non-linear continuity creates a dilemma for my blog, but maybe not a terribly consequential one. The time has come for me to play the early backlog of Epyx, including Temple of Apshai, but do I play them as a retrospective leading up to Jumpman, a breakout title for Epyx that none of the Dunjonquest talent were involved in, or for Archon, an Electronic Arts game made by Dunjonquest's creative contributors? Either way, I would play the other title later. Ultimately, I've settled on Jumpman, simply because a brand-name focused retrospective is more consistent with how I've done this in the past.
Email ThisBlogThis!Share to TwitterShare to FacebookShare to Pinterest
Labels: Epyx