Game 203: Dunjonquest: The Datestones of Ryn 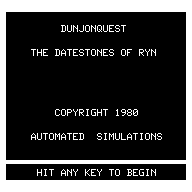 Released just a few months after Temple of Apshai, Datestones of Ryn was the first "Microquest" a spinoff of Dunjonquest aimed at beginners by offering a smaller game world, streamlined design, and a lower price. This time, we are assigned the role of Brian Hammerhand, whose adventures were chronicled in Temple of Apshai's manual, and there is no option to create or import a different character. Good old mercenary B.H., now part of the cavalry of Ryn, and having just tracked a band of notorious thieves to their hideout, your first job is to storm the stronghold in search of the stolen datestones before they can escape by their secret exit. You have 20 minutes to recover as many as possible, and may receive a special bounty for killing their leader Rex the Reaver. 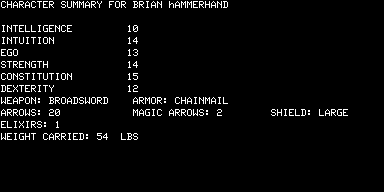 Apart from removing the character creation and thin development mechanics, this plays almost exactly the same as Temple of Apshai, but condensed into a single session and with a twenty minute time limit, which sadly is subject to the achingly long room draw times. You explore a dungeon, search for treasure, and kill monsters and thieves. There are no room numbers this time, and no textual room descriptions, but the dungeon here is both tiny and simple. The manual claims there are 20-30 rooms. I count 16, and had exhaustively searched every side of every room for secret doors, finding only one, which was really just a shortcut. 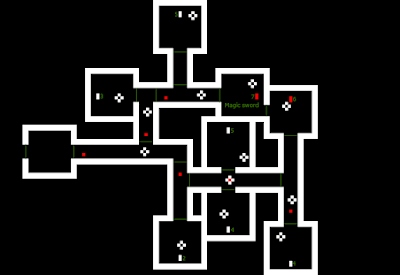 I made about a dozen attempts, most of them getting me killed. This really is a luck-based mission. Sometimes you enter a corridor and an enemy spawns so far away that you can just pluck arrows at him safely. 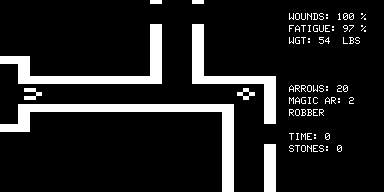 Other times, especially in the stone-storing rooms, you'll start with someone right in swatting range and then take a severe hit even if you parry, which seems to be the safest action in most circumstances.


The game engine is still quite slow. This slowness can lead to dropped inputs, or even worse yet, to making you think an input was dropped, causing you to press it again, only to realize that the input merely lagged, and now you are performing the same action twice. In a game with a strict time limit and limited healing, you really, really don't want to make any mistakes.
Your only method of healing is a single elixir, and the amount restored is random. Sometimes it restores 50%. Sometimes it only restores 20%. Either way, you can't afford to take many hits. Thankfully the robbers are mostly crummy fighters, but with up to two per room, the odds of totally avoiding damage are against you.

Rex himself hides in one of the stone rooms and will ambush you as soon as you try to grab the treasure, which consists of seven datestones and a magic sword, which kills robbers in one hit usually.

After about ten attempts I managed to collect all 36 datestones, only to run out of time. And I realized that if you want to "win" by getting them all, you've got to avoid fighting as much as possible, especially in the stone rooms. Better to rush in, grab the stones, rush out, and hope they don't hit you for any damage. If they do, well, fighting them would have been a crapshoot too. Like I said, luck-based mission.

I managed to get in, get all the stones, and get out in 15 minutes, giving me a score of over 4,000 points, well beating out the 3,000 points scored by the highest-performing players of the day, but this was a run where things went remarkably well for me. I haven't got a strategy that consistently scores even half that much. 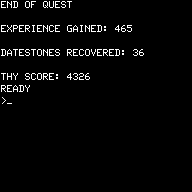 GAB rating: Bad. One one hand, the Microquest format fixes a lot of the problems with Temple of Apshai. The vast majority of its bugs are either fixed or made non-issues due to the streamlined gameplay, and most of the limitations on character development and such are irrelevant when the entire game is reduced to a single dungeon run with a fixed character.

On the other hand, the gameplay also streamlines away nearly everything that made Temple of Apshai interesting. The dungeon is tiny, kind of dull, and there aren't any of those atmospheric room description paragraphs. The tactical combat isn't deep or complex enough to make up for the complete lack of character growth and development, and any strategies' success or failure ultimately comes down to sheer luck.