Temple of Apshai: Not satisfied with silver

I began my session on level 2 with an unpleasant lesson about the battle mechanics, when my +2 weapon was ineffective against a colony of vampire bats guarding a cedar cabinet.

When I last played, my character sheet listed my weapon as a "MAGIC SWORD +2." When you import a character, you are asked what kind of weapon you have. "MAGIC SWORD" wasn't accepted, and the innkeeper said I'd have to buy something from the shop, but later asked if I had a magic weapon. I said yes, and it prompted me for the point value, which was 2.

Turns out that even though my character sheet listed "MAGIC SWORD +2" as a weapon, the magic sword doesn't replace your basic weapon - it enhances it! I had effectively given myself +2 fists.

I re-imported, made sure to specify that I had a broadsword before declaring my magic weapon, and this time utterly broke the bats. Even my arrows clearly did more damage than before. The treasure here was a set of candelabras and trays worth 1800 pointless SP and a skull ring of unexplained power.


This floor of the temple gave me little trouble overall. It seemed to be a campus, with workshops, smithies, textile mills, and living quarters, most of which contained nothing but useless garbage, but the rooms further from the entrance had valuables such as precious metal ingots and rubies, which were also useless to me.


A few hidden passageways led to other, less savory looking rooms, such as an alchemist's lab with shelves of nasty ingredients, where I found a few healing potions, and behind a hidden door, a study room where I found a magical talisman granting powers of perception, though ironically I couldn't perceive any difference it made.

I had to be careful of traps, which did much more damage than in the previous level, and had nastier descriptions to go with this. For instance, a trap described in level one as a ten foot pit that suddenly opens up at your feet, has a counterpart here described as a ten foot pit with spikes at the bottom. Oddly, my shield protected me from that one.

To the east were some large storage rooms with finitely respawning enemies, no valuable treasure, and a hidden door leading to an entire second dungeon segment - a secret prison. 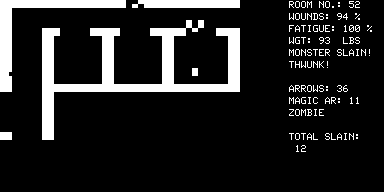 There wasn't much in the cells - just a bunch of skeletons, zombies, garbage, and a few loose silver coins, but the central dividing hall concealed a passageway leading to a torture chamber, where moaning and clanking could be heard, but the source unseen.


Onto level 3 - the mines beneath the temple! 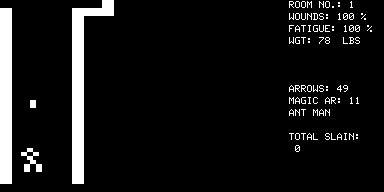 Combat started off rough - an ant-man hit me twice knocking me down to 26% health, forcing my retreat. My second attempt got me much farther in - the enemies still hit infrequently, and when they did, not nearly as hard. At a junction I went west, finding several caves full of gold nuggets. Many of these rooms were trapped too - the manual states that level 3 lacks man-made traps, but cave-ins are a common hazard.

Avoiding traps is handled strangely in Temple of Apshai. When you search for them, there's a good chance that a pixel on the screen will start blinking for a few seconds. You'll have to remember this spot and avoid it, or else you trigger the trap, and may suffer large amounts of damage or outright die. But because of the way movement works, you can also walk right through them safely. Pressing "9" translates to "walk in the direction you face nine steps," but it's really more like "teleport forward nine steps." As long as the ninth step doesn't land on the trap, you'll be fine.

In a large, web-filled cavern in the north part of the dungeon, a giant spider one-shotted me to death through my shield and full plate armor. The wizard revived me (and despite the manual's warning did not take away my magic sword or arrows) and I tried again, to the same results. So I avoided this section.

In the eastmost section, a bone-filled passage with diamonds, emeralds, and rubies scattered throughout led to a quadrangle of rooms filled with carrion crawlers, which in spite of their ferocity were unable to harm me. One such room contained a backpack full of gold coins and jewelry including another magic skull ring.

The rest of this section was mostly uneventful, with many skeletons and bats to fight, and a lot of simple corridors with loose gems to pick up, though one large room in the east section had an interesting description:
Room Ten - is a large natural cavern. Tracks lead into the chamber that suggest something heavy being dragged. The floor is covered with slimy red muck. A pile of body parts and gnawed bones occupies the northwest corner and the air reeks of decay and death.

In turn, it had an interesting treasure:
In the corner you find a small sack with two small diamonds, a small sapphire, a small ruby and a diamond goblet inside.

Going by the numbers, one room remained undiscovered, and I had noticed that so far there didn't appear to be any secret doors in this level. So I began searching walls, and thankfully found a secret door not far from the level entrance. Within, a room bore this description:
Room Sixty - is a huge vault with stonework walls and floor and a native rock ceiling. Rude statues and carved pillars picture men and half-men. As the figures become more bestial, the workmanship becomes more primitive. Ancient tools and artifacts lie all about the chamber. Small stone doors of cunning device line the east and south walls. Several of these are open, revealing three by three by six foot openings into the rock. A shroud hangs from one of the open cavities. Glyphs of unknown symbology cover the walls. The dust of the floor is thick and undisturbed. The air smells of musty antiquity and death. Several urns and coffers in the southeast corner gleam with jeweled brilliance.

But the wights apparently sapped my strength - a very bad thing given there's no honest way to restore it - and eventually the game just crashed. 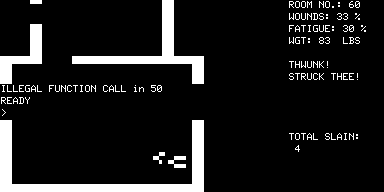 I did go back to the spider's nest after this, using the character importing system to cheat by temporarily setting my stats higher than what they really were. I found that with all of my stats set to 16 and a bit of kiting I could beat the spiders, but with my stats at 15 I couldn't. I suspect dexterity was key, as every single time I got hit, I took at least 50% damage (even when my shield blocked), but with 16 they usually outright missed. The reward was 200 gold nuggets worth $10,000, nearly as much as the treasure in the secret mausoleum.

Exploring and mapping out the temple is compelling, but the sense of RPG development has been underwhelming. A big part of the RPG experience is seeing character growth, and that just isn't happening here. My stats remain unchanged, except for experience points which lack clear purpose, and my equipment is no better now than it was at the end of level 1. I'm just waiting for the challenge level to catch up with me, though in the case of two of the optional rooms here, it already surpassed my abilities. One more level to go.
Email ThisBlogThis!Share to TwitterShare to FacebookShare to Pinterest
Labels: Epyx