The only reason you really need to go into space is to visit Planet X and meet Father Antos, but there are eight other planetoids, and I wanted to see all of the sights that Ultima II had to offer. EA managed to screw this part up in their CD-ROM collection, accidentally replacing several planets’ files with files of earth locations from the primary disk, but in the original 1982 release, all of the planets are distinct, though not all are interesting.

You can dive, climb, and steer like you could in Ultima, and there’s a 3D parallax scrolling effect when you do, but there’s no point to any of it. I have to assume that Garriott planned to have dogfighting again, but abandoned that arc after programming the controls.

There are only two meaningful actions in space. The first is entering hyperspace, which requires entering the coordinates of your desired destination as outlined in the manual. Hyperspacing into the sun’s coordinates is, of course, instantly fatal. Each hyperspace depletes one unit of your Trilithium-powered fuel, and for some reason the first hyperspace always drifts off-course, forcing you to try again.

The second, once you arrive at your intended destination, is to land the ship. This necessitates a swap to the long-dormant Galactic Disk, and then brings the ship into low orbit, where landing is quite dangerous. 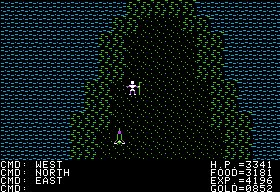 A mostly water-covered planet with a few swampy islands, only the largest is safe to land on. A moss-covered land bridge leads northward to another island, with a dungeon containing many long, linear, tedious corridors, a few truly nasty mazes (including one that’s as wide open as the engine allows, with the ladder hidden on one tile, and multiple mazes that are 90% secret doors), and nothing else of note except a great deal of trilithium at the bottom. 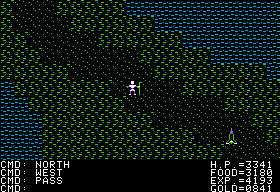 A bunch of twisty, swampy paths through an ocean. No signs of life or civilization. 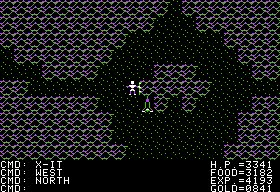 A heavily mountainous planet with only a few safe landing spots. The narrow crevasses through the mountains all lead to a clearing with a single settlement called Towne Mary.

Towne Mary is a pretty boring place, with the standard weapons, armor, and horse shop, and pub. As with other towns, there were four NPCs with unique quotes, none of them helpful, though there was an unsettling circle of wizards huddled in a corner. 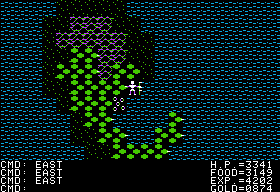 An almost earth-like planet, with two main continents separated by an ocean which can only be crossed from low orbit.

On the larger east continent is a dungeon that I didn’t care to explore, and an unnamed settlement heavy with swamp land.

The settlement had a magic shop, church, oracle, fast food joint, and docks with friendly pirates, who let me borrow one of their frigates, though all I could do was sail around the swamp and locate a jester marooned on an island who cryptically told me “YOU’RE HALF WAY THERE!” A merchant near the restaurant wanted a duck. Dupre could be found by the oracle, but I couldn’t get him to part with his duck.

The smaller eastern continent had a tower, which I also declined to explore. 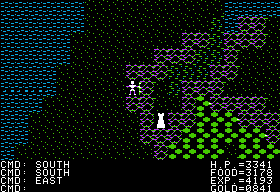 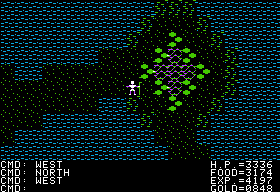 A single continent, with some interesting terrain, but there’s nothing else. No settlements, no dungeons, no nothing. 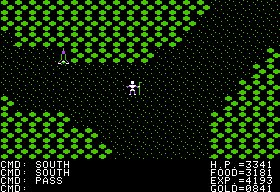 A forest planet with winding paths, some leading to a lake, others converging at a lone settlement. 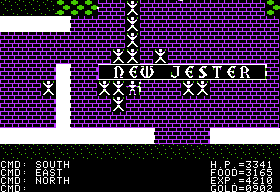 A settlement full of those damned jesters! Jesters programmed to swarm you on sight but not attack unless you hit first, which of course you have to if you get boxed in. This seemed a good place to use my strange coins,which freeze everyone in place for a few turns.

I left this cursed place, never to return. 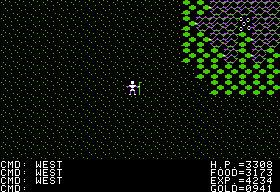 Almost entirely a wide-open plane, except for a settlement in a small mountain range. 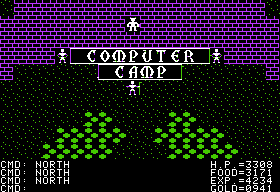 Another silly place, not half as annoying as New Jester, the Computer Camp had nothing of importance, but Richard Garriott made a cameo. 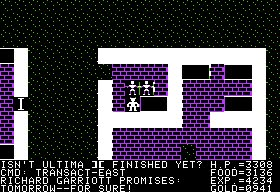 A bunch of orcs and fighters walked around the various cabins and stores, and some NPCs who I assume represent Garriott’s friends blathered inanely. A psychedelic “camp fire” burned for 1000 damage when I touched it. 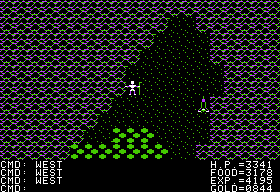 A mostly mountainous planet with few regions safe to land in. The largest area had a dungeon (which again, I avoided), an airplane for easy navigation around the planet, and a town “Makler.”

Four NPCs in the pub all had unique quotes – a bouncer asked “WHERE THE HELL IS YOUR I.D.?”, one pirate reminded me to find Father Antos, and two others told me to seek the clerk in New San Antonio – a clue I doubt you’d be likely to reach space without already knowing. Curiously, this town also had the LB insignia in the middle.

The airplane allowed me to fly around the surface of the planet, where I found one more town, but nothing useful. Two fighters there, Bill and Bob, had this racket going where each one instructed me to give the other money, but nothing ever came of it. It's not mentioned in the manual, but the town in Pangaea gives you the hyperspace coordinates of 9-9-9 to reach this planet, where a single continent spans the globe, and features a town and castle.

The town was pretty useless, with a pub, weapon shop, armor shop, horse shop, and docks, all things I’ve seen already. The bar, called “GET DRUNK AT OZYS,” had NPCs who would only state that they disliked mages. Two fighters in the weapons shop told me to find Father Antos on this planet to earn the ring, but I knew that already. A ship could be stolen from the docks, but on a planet with only one continent, this wasn’t especially useful.

The castle is where I finally met Father Antos. First, I greeted the king and queen (or is it the king and a spy?), who raised my HP for money and told me to seek Father Antos, respectively. Behind the throne were locked doors, leading to the rest of the castle’s rooms. The “kueen’s” bedroom, a sewage-soaked jail full of vile inmates slinging harmful spells at me as I walked through, the kitchen where the cook Sing Lee displayed a bit of casual racism, and finally the chapel. 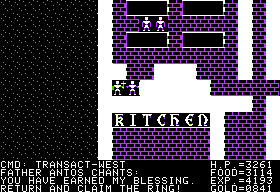 
I hyperspaced back to coordinates 6-6-6, landed in North America, and took the time gate there back to South America in 1990 AD. There, I walked to New San Antonio, and offered 500 gold to the old man under the tree again. 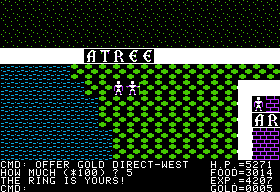