I decided to restart. Farming gold and items was reaching a point of pure tedium – dungeon delving wasn’t sustainable, overworld enemies were scarce and took so long to repopulate, and I had wasted so much money already on spells, HP, and food; resources that I would not have to spend much on at all by simply commandeering a frigate at the earliest opportunity and blasting everything in sight.

My first play hadn’t been a waste by any means – I had mapped out most of the game already, I had learned the secret of Hotel California, and also now knew that I needn’t max out my strength as much as possible early on, as my copy had fixed the bug that prevents strength gain.

Before doing that, though, I tested out the Prayer spell to see what it does.

It’s a kill spell. Either that or it does enough damage to kill anything from orcs to gremlins in a single cast. It doesn’t work with 100% effectiveness – for me it failed on 8 times out of 15 attempts. Enemy strength doesn’t seem to matter; on one orc it failed five times in a row before succeeding on the sixth. I don’t know if wisdom affects the odds – mine was 24 when I tested it.

At a cost of 44 gold per cast, it’s not worth it against most enemies. None ever drop more than 20 gold, and as a last-ditch effort against an enemy that might kill you, Surface is a far better option – it’s cheaper, it always works, and it gets you out of there. Prayer might be a good option against gremlins, whose special attack would rob you of 52 gold worth of food each time. If an enemy would deal at least 528 damage to you before you kill it through melee, then Prayer would be a worthwhile cast assuming a 50% success rate.

Restarting, I decided to try a wizard this time, just so I could see if the spells are any good. For the rest of my traits I went with the options that gave the largest numerical stat boosts – a female hobbit – and simply put points in the other stats to balance things out. 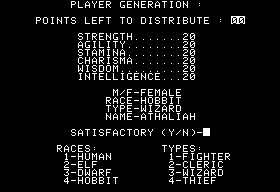 I repeated the starting song and dance, walking to Linda, Italy, and bought some weapons and armor – I could wear the chain mail just fine with 20 strength, and my 20 agility let me wield a battle axe. Prices were already significantly lower, just from having 20 charisma instead of 10.

Combat seemed to be more difficult than was the first time around. I still didn’t hit often, and even the weakest enemies took more than one hit. Sea monsters were especially annoying, as enemies run away when injured, and return when they heal, and as I couldn’t follow the sea monsters into the ocean, nor could I finish them off with a single blow once they returned, my only option for killing them was to lure them into a one-square gulf and then attack from a side so that they couldn't escape. But eventually I gained a blue tassel, got a frigate to spawn, and boarded it, which made my life quite easy.

Quite a bit of gold farming later, along with some savescumming at Hotel California to ensure my gold didn’t go to waste, I noticed that after increasing my charisma, prices decreased significantly again. The armor, originally 3948 pieces, and once reduced to 2440 for my charisma bonus, was now reduced again to 1508. Food was reduced to 20/100, magic got reduced in price, etc. I was trying to figure out the exact relation of charisma to discount – the formulas used in Ultima I were not working out – but then I realized what’s going on here. Prices for weapons, armor, magic, food, and horses operate by Fibonacci sequence!

Having enough charisma will lower the price of every item by a number of sequences . In my case, everything got a two-sequence discount; Power Armour cost the same as what Reflect Armour normally costs, Reflect Armour has a price tag two rows below its normal value, etc.

After several dull hours of farming gold and spending it on the best gear, some spells, lots of food and HP, and several stat boosts (with savescumming to ensure the boosts do happen), my character sheet looked like this:

I decided to delve the tower of Egypt to see what would happen.

The end result wasn’t exactly profitable in terms of gold – I collected 775 pieces, but spent 2250 HP, five kill spells, five ladder downs, two magic missiles, 27 torches, and 18 tools. Near the top, the layouts were pretty simple, but it seemed like every other step I took activated a trap. But I made it to the top of the tower, where I found a very large amount of Tri-Lithium just lying around, much of it behind a secret door. I had found some quantity of this from farming enemies before, but this nearly quadrupled my supplies. 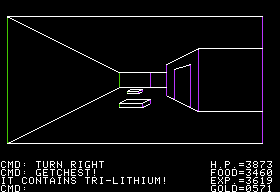 With Power Armor, I rarely took hits, though the toughest enemies near the top hit for over 100 points per successful blow. I encountered Balrons here, capable of casting a nasty sleep spell which debilitates you for multiple turns, and against them I put my pricey Kill spells to use. As in Ultima, they worked with 100% accuracy. 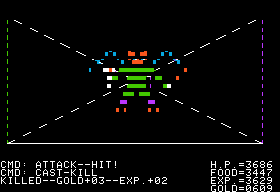 In case you’re curious, and I was, mage spells do not work in the overworld. So don’t bother.

After replenishing my supplies, farming another 900 gold, I then visited the oracle in New Jester, using savescumming to see all of the clues without spending any money (otherwise it would cost 4500 to hear them all).

TIME AND TRAVEL MADE ME WISE,
PRECIOUS GOLD, A CLUE IT BUYS!
ASK ME NO QUESTIONS,
I’ll TELL YOU NO LIES.
THE EVIL MEN DO
IS A HORRABLE THING
BUT DISPELLING MEANS
THAT YOU MUST HAVE THE RING.
JUST WHERE IT IS,
I CANNOT SAY.
BUT I’LL TELL YOU RIGHT NOW,
THERE IS NO OTHER WAY.
I HEAR IN A TOWN
WHERE THE WATER RUNS FREE.
THERE IS AN OLD MAN
LIVING UNDER A TREE.
HE DOES NOT HAVE A NAME
BUT HE DOES HAVE A CLUE
MAYHAPS IF YOU FIND HIM,
HE’LL TELL IT TO YOU!

Even talking to the oracle required murdering a mage who was loitering right in front, which meant attracting the guards’ attention, but I waxed them pretty easily. They still hit hard, but with my power armor, they didn’t hit too often. I mopped up most of them on my way out – one of them absolutely refused to die, though, and hit me a few times, costing me 1000 HP. But for the rest, I had gained 12 keys.

It was time to explore time some more, and see what these keys could unlock.

In the BC era (now known, thanks to the Australian signpost, to be 1423 BC), Lord British’s castle could only be reached by frigate. Within, a locked but barely guarded vault held uninteresting weapons and armor; nothing better than chain mail or great swords, which are cheap enough to buy almost at the start of the game, let alone at the point where you're strong enough to tangle with the guards who hold the keys needed to enter. The prison held many thieves, who had nothing interesting to say, and in fact blocked my passage to the point where I had no choice but to kill them to get out.

In the AD period, 1990 AD to be precise, the castle was mostly the same, except that an imprisoned Balron had a clue that I didn’t really need. 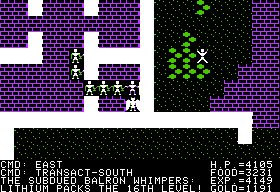 North in Port Bonifice, there was a woman locked in the bathroom of Mc Donalls, presumably sick from eating the food. A seer behind a locked door offered clues for sale, but they were the same as the oracle’s from New Jester. Lastly, opening the door to the docks unleashed a horde of angry pirates, but as soon as I fought back, the entire town’s watch descended on me (and one of them, again, refused to take any hits). There was nothing to be gained from this adventure except for an unneeded frigate, and a message “THINGS ARE NOT AS THEY SEEM.”

New San Antonio had a lot going on. First, unlocking the stables immediately caused the angry shopkeeper to attack me… which caused the immediately adjacent customs office to send six guards (one invincible) down on me hard. Horses were free for the taking, but come on, it’s easier just to buy them. The swimming pool had a couple of hostile sea monsters swimming around, and attacking them back – guess what – attracted the guards. A fighter by what looked like a diving board boasted “I OWN ONE OF EVERYTHING!” The prison was filled with hostile entities, except for a fighter who announced he had a Quick Blade, and gave it to me once I offered him 500 gold.

The arboretum had this silliness: 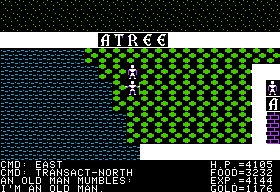 It checks out with what the oracle was saying, but there wasn’t much of a clue until I offered him 500 gold as well – he said “EARN THE RING!”

Lastly, the airport was guarded by three locked doors and a lone fighter, who I killed, stole his airplane, and flew it into the time gate to the aftermath, by way of Legends through Australia.

Only one destination here is worth checking out – Pirates Harbour. Here, for the cost of one key, I could unlock the door to the docks, kill one pirate, steal a ship, and then easily slaughter the legions of KGB agents with my cannons. From there I could waste the mutant swans and sail to the north side, where the soviet rocket ships waited, unguarded.