The starting of Ultima II is rough. In Akalabeth and Ultima, a good way to increase your HP was to head into a dungeon, beat up lots of weak monsters, and leave, which would typically award you much more HP than what you started with, put some gold in your purse, and as long as you weren’t running low on food, you could go right back in and get even more HP. You could do this almost right off the bat, provisioned with goods purchased with your initial funds.

In Ultima II, you can’t. Dungeons are fewer, farther between, and when you enter one, this happens. 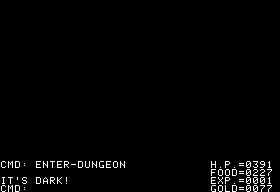 I hadn’t yet found any places that sold torches. I could buy light spells, but when I tried to cast one, the game told me I needed a staff or wand.

So I went exploring. I still had some trouble making sense of the time gates, so I made my own maps by taking frequent screenshots and splicing them together. Each of the five time zones is essentially a different world, with four time gates linking it to the rest of the worlds. Some gates work two ways, but others don’t – for instance, every gate to the Aftermath era leaves you in Alaska, but the gate found there only goes to South America AD. The gates open and close on a cycle – every eight turns, one gate closes, and another opens, cycling through all four gates every 32 turns. This is most apparent in Legends, which it turns out is perfectly safe to visit as long as you don’t leave the drop-off point, where all four gates are located in close proximity.

The flow of time gates, minus a few I have not yet located, looks like this: 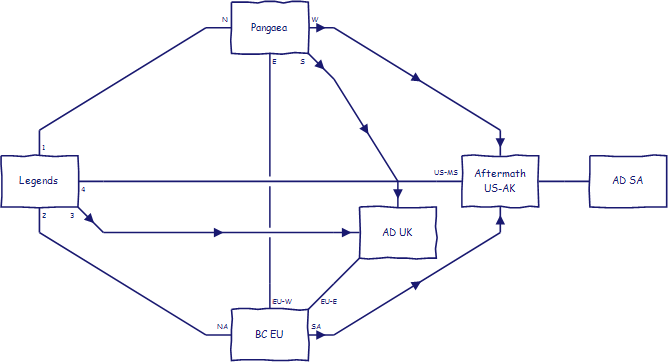 While exploring the web of time gates, I soon found a portal to England, where Lord British had settled, natch.

Nearby was Port Bonifice, which had a completely different layout from Linda. I eventually realized that each town has up to four NPCs, usually in conspicuous locations, who offer unique text rather than the generic responses offered by the fighters, mages, clerics, thieves, guards, and merchants. Occasionally, these are important clues, making it necessary to find them all. One NPC in this town, a “sightless sage,” advised me to find the father and earn the ring. Most of the time, all they have to say is dumb jokes, cameos (Andy Greenberg and Robert Woodhead can be found in a Wizardry shop), and/or pop-culture references, though one struck me as in particularly bad taste.

Exploring the towns poses another problem – you eat food really fast in this game. Tile for tile, the towns are bigger than the world they exist in, and although this can be handwaved by accepting that the towns are projected at a smaller scale, you still eat food just as quickly. Faster, even, as you can’t bring your horse into town. And unlike Ultima I, food is expensive, and gold is scarce, so you can quickly find yourself broke and hungry in this early stage. Ultima II auto-saves when entering towns, so I would save food by exploring, mapping out the town, and then rebooting/reloading once I had a full map and notes.

Port Bonifice had, in addition to one useful NPC, an unusable wizardry shop, a church where a fighter and merchant were apparently getting hitched (and the priest sold spells), a fast food joint with a jester mascot and a locked restroom, and a “seer” whose kiosk was also behind a locked door. Lastly, there was a dock labeled “Port Bonifice” with three ships moored and several thieves, but it too was locked.

There was no way off England except the time gate, which returned me to Europe, from which two towns were easily reached by foot.

Linda, located in Italy, has shops for weapons, armor, and horses, which I had already purchased. The pub sold drinks, which didn’t seem to serve any purpose, but tipping the bartender produced several hints – each amount (from 0 to 9 gold) seems to give one of two random quips, and the useful ones all concerned items.

Guess I need to slaughter townsfolk to make some progress? The problem is that the guards hit really hard and have lots of HP themselves, making this sort of a catch-22. But I kept exploring.

While exploring the overworld, I had to fight monsters every now and then, who spawn periodically. With my high strength and low agility, I didn’t hit often, but hit hard when I did, and my chain mail kept me from getting hit too much. Still, I knew I had to conserve HP, as it wasn’t cheap to replenish, nor convenient – I’d have to return by time gate to Lord British’s castle in England, which would also mean consuming food that I’d have to spend more money to restock on.

In the South African city of Le Jester, a nymph told me to visit Hotel California. An oracle gave hints for outrageous fees – donations in increments of 100 from 0 to 900 were accepted – and all I could afford were the first two (for 0 and 100 respectively):

TIME AND TRAVEL MADE ME WISE,
PRECIOUS GOLD, A CLUE IT BUYS!
ASK ME NO QUESTIONS,
I’LL TELL YOU NO LIES.
THE QUEEN IS THE KING
AND THE KING IS A SPY

A time gate in Europe took me to Pangaea, where I had to abandon my horse as it would not cross swampland. A single city, Baradin, occupied the southern edge supercontinent, where apart from having shops for spells and food, two astronauts informed me that there was a planet ‘X’ where Father Antos lives, and a “phylosopher” offered coordinates of 9-9-9.

A time gate to North America in the aftermath was mostly uninteresting, as it had no cities, and no way off the continent except for time gates to Legends and South America. I almost hadn’t realized that the latter was, in fact, an unexplored area; although it looked similar enough to the South America south of the beginning of the game, the cloth map and comparisons to my own notes showed that the starting time period is B.C., and this South America was in A.D. In fact, this was the only time gate to a region of A.D. besides England, and had been entirely uncharted.

A.D. looked very much like B.C., and even had a land bridge from Alaska to Russia, allowing me to traverse every continent except Australia and Antarctica, but the only thing I found of note, apart from time gates back to previous regions, was the city of New San Antonio, which had many attractions, most of them behind locked doors.

Stuck again, with a good chunk of the game mapped out, but no clear path for making further progress, I stopped here.
Email ThisBlogThis!Share to TwitterShare to FacebookShare to Pinterest
Labels: Origin Systems, Sierra On-Line