The early phase of Ultima II is a catch 22. To get gold, you’ve got to kill monsters. Killing people drains your HP. To replenish lost HP, you have to buy it. To buy HP, you need gold. And to get gold, you have to fight monsters, which costs you HP. HP is bought at 300 per 50 gold, which means that if your fights do not earn you at least 1 gold on average for each 6 HP that you lose fighting them, you are not going to be able to replenish that HP, and are effectively dying.

Improving your stats so that you can keep your head above water takes absurd amounts of gold and requires accomplishing quite a bit before you’ll know how to do it.

Then there's food, which costs yet more gold and is constantly being eaten as you walk around and explore, especially in the towns, where food is still consumed at the same rate of approximately 1 unit every five steps. Horses, as it turns out, will double your food consumption over the same distance, though they can outrun monsters.

Magic also costs gold - lots of gold - and you can't even cast it without a wand or staff, which aren't for sale anywhere that I could find.

On top of all that, there are places that can't be reached by foot, even with all those time gates. The only other means of transportation I had found so far were behind locked doors, which must be opened with keys taken from the extremely difficult guards. Without some stat boosts or a huge amount of HP, this just wasn't going to happen.

In an attempt to kickstart my growth, I did an unscrupulous thing, unbecoming of my clerical profession. I murdered a mage in Le Jester for his staff, and beat a hasty retreat. Guards hit very, very hard, and with my low agility I wasn’t hitting too often. Fortunately, your attacks don’t alarm anyone until they connect, and with my high strength I killed the mage in one blow (and several misses).

Finally, I could light up a dungeon. 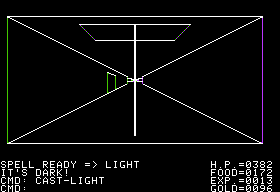 As expected, moving around was quite fast – even faster than Wizardry which restricted the dungeon viewport to a small corner of the screen – and a welcome upgrade from the horrendously slow drawing routines that made dungeon delving such a slog in the original game.

Unfortunately, killing monsters does not earn you HP any more. What’s more is that dungeon monsters hit much harder than surface ones do – not quite as hard as guards, but hard enough to outweigh the benefits of collecting their gold, which is paltry on the lowest level. 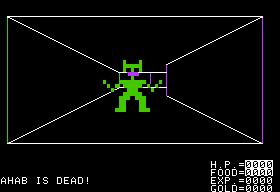 My salvation, it turned out, was a frigate. While wandering the overworld, battling orcs, thieves, and demons in aftermath North America, a frigate sailed into the shore, and I was able to simply board it, and use its guns to annihilate everything in my path, amassing riches previously unfathomable.

With that achieved, suddenly I had a solution to multiple problems at once. The frigate could efficiently battle overworld enemies, and I would collect plenty of gold and loose items from the carnage. The frigate could take me nearly anywhere in the world, though I couldn’t take it through time gates, but luckily I was in the aftermath world, which was already my least-explored map (aside from the deadly Legends world). Food consumption also dropped to almost nil. This seemed too good to be true – was I really supposed to have access to an overpowered frigate so early in the game? I re-checked the manual, which said of frigates:

When a frigate docks near you, you can commandeer it – if the crew will accept you as a seasoned sailor. Otherwise, they’ll turn the broadsides on you.

The bartender had told me earlier that sailors wear tassels. Sure enough, I had one in my inventory, presumably from a random enemy drop, which I assume allowed me passage onto the ship.

That’s another one of Ultima II’s peculiarities. Enemies will randomly drop all sorts of items, which are automatically and silently added to your inventory after a successful kill should they drop one. From the frigate-induced bloodbath I had gained multiple torches, tools, boots, gems, skull keys, and a cloak, a brass button, and a green idol. Some of these had purposes already described by the bartender, some are in the manual, but others are a mystery. Annoyingly, thieves will steal these things constantly, but this is less of an issue when sailing.

I sailed around the aftermath world, finishing my map, and in it discovered two more time gates in Asia, a village in what I guess is Murmansk, a signpost in Australia telling me the year was 2112 AD (do they change it every year, or had it just not been updated since?), and a dungeon in Greenland. I entered the village, which was called Pirates Harbour. 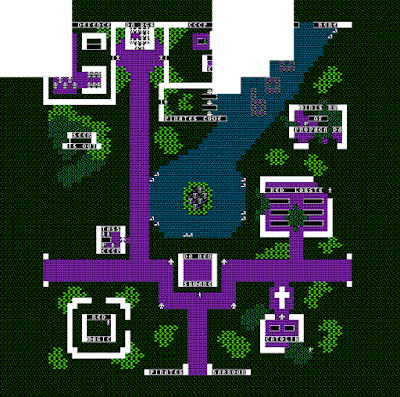 Evidently the Soviets won the war, in the sense that they have the last city on earth, but it’s a bombed out husk, with destroyed buildings and extremely deadly mutant swans swimming around in the radioactive estuary. Only the Red Magic shop does anything (and they won’t sell to clerics), but there are lots of locked doors up north where I could just make out a bunch of airplanes and a rocket ship, both in close proximity to a barrack full of surly KGB agents. A jester, guarding the rocket, offered an important clue.

So I returned to the AD period and New San Antonio, offered 100 gold to the clerk at Hotel California, and he said “ALAKAZAM!” Checking my stats, I noticed that my wisdom had increased by four points.

By offering the rest of my gold in various increments, I found that the stat gain is random, the value given is 4 points per 100 gold offered, but sometimes you gain nothing at all. I pity the player whose first attempt at offering gold was fruitless, and then concluded they had been pranked by the village idiot and never tried doing it again.

I did find, contrary to expectations, that my strength sometimes increased through this process. Could I be playing a patched copy?

I spawned another ship, and sailed around for a while, annihilating the masses of monsters that had accumulated in the area, until I had a little over 900 gold. I wanted agility, as it determines both hitting accuracy and also determines which weapons you may wield, and was prepared to use savescumming to ensure I got this (the game does autosave before entering towns, so it’s not that egregious a cheat in this case), but I gained my 36 agility points on the first try. There wasn’t much gold left over, just enough to upgrade my dagger to a battle axe.

Now I was a semi-respectable fighter! I hit often and I hit hard. Granted, I was a cleric, but spells cost money, and I wasn’t sorry I invested in permanent upgrades first. There was one dungeon in this era - a tower in Egypt, and I decided to give it a try, to see if I could amass wealth any faster than by tediously sailing around and shooting monsters as they spawn one-by-one.

The dungeon experience is quite a bit improved from Akalabeth and Ultima! Apart from the speed boost, and the much better enemy graphics, the levels are now designed by hand, though nowhere near as large as Wizardry’s. This means some devious tricks and traps, and even some 3D navigation – for instance, when you reach level 7 in this tower, you can keep climbing up to level 8, or you can search the level for a different ladder that takes you to a completely different part of level 8, which has a ladder going down to a previously inaccessible part of level 6, filled with treasure. 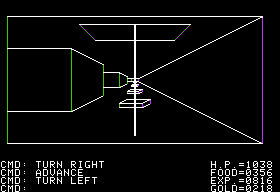 Unfortunately, this didn't prove to be a great way to amass gold. Monsters are worth 1-20 pieces, same as on the surface, but they hit much harder, and only get tougher the farther you get from the surface. Treasure chests with gold also contain 1-20 pieces, regardless of level. Sometimes they have weapons or armor, which does seem to scale with the dungeon level. That’s nice, but since you can’t sell duplicates (and thieves don’t steal equipped items), this quickly becomes less valuable than gold.

Dungeon exploring doesn’t just take a toll on your HP, but also on your supplies. As a spellcaster, I can simply buy light spells instead of farming torches, but that’s still a money drainer. Starting around level 3, you start to encounter ghosts who will blow your torches out (or nullify your light spell), forcing you to fight them in the dark and then burn a second torch to continue navigating. Random traps – they seem to just get triggered randomly regardless of where you step, or whether you have stepped there before – will blow out your light and also cost you a tool, which can only be replenished by farming on the overworld.

Admittedly, I wasn’t best prepared for this – I was an ok fighter, but I brought no spells except for a few light spells that I bought some time ago. By the time I reached level 8, I had burned through almost 1500 HP, gained enough gold to replace it and have a surplus of about 230, minus some food and spell expenses, which wouldn’t leave me with a big profit. And then these bastards showed up. 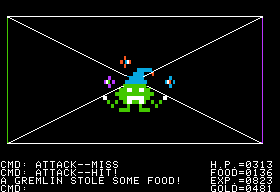 Fortunately, they’re not nearly as horrifying as before – they always steal 100 food, rather than the 50% of your total in previous games, but it’s still nasty, and each theft means 52 gold spent replacing it, even if you don’t starve.

Finally, a carrion creeper got me. 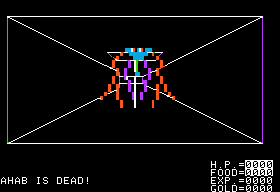