The horde waiting in Legends never really stood a chance. There were a lot of them, sure, and even my Quicksword couldn’t carve through them like butter, but my sundry of items mostly protected me from their magic, the Power Armour ensured I took few hits, and none hit especially hard when they did – the worst of the lot were the wizards, who unfairly hit me with Magic Missile even though I couldn’t cast it back at them.

In the middle of the island, a few more bunched-up baddies guarded the entrance to Minax’s lair. 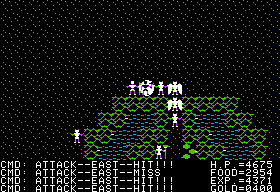 I killed them, and entered. 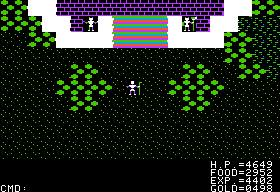 My ring allowed me to pass through the force field unharmed, and the demonic guards within just stood there silently. Not everyone was so benign, though.

Here, enemies hit for as much as 300 points of damage! I didn’t dare fight back – Ultima II logic dictates that as soon as you do, the whole place turns on you, and you don't want that. Instead I used my Strange Coins to freeze enemies in place when I could not outrun them.

I soon found Minax, who blasted me for a few hundred points of damage with Magic Missile as I approached, though the balrons in the room stood still. 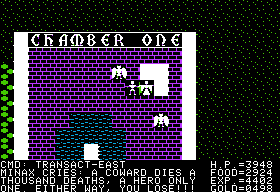 One hit with the quicksword, and she teleported away, leaving her balron bodyguards to pummel me. 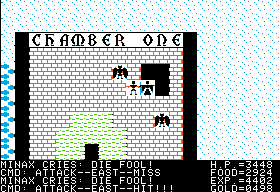 I rubbed another Strange Coin, took a few hits running past the immobile balrons, and continued to search her castle, using more coins whenever encountering hostiles.

She was waiting in Chamber Two, on the opposite corner of the castle, alone. 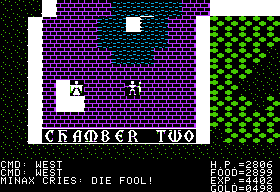 Another hit, and she retreated back to Chamber One, just as her bodyguards entered the chamber behind me, in hot pursuit.

This continued a few more times, chasing Minax back and forth between chambers. Whenever I had to pass a pursuing balron or devil, I made sure to maneuver them as close to a wall as possible before freezing them with a strange coin. If frozen in the middle of a corridor, they can still swipe at you as you walk past them, and hit you with paralysis or sleep spells from a distance of two tiles.

My fourth hit ended it.

Before moving on from this game forever, though, I wanted to try one last gold farming technique, which turned out to be the best one yet, though you must be fairly strong to do it. The Legends world is mostly open, making it easy to funnel enemies toward you. If you can thin out the initial ranks and then spawn and board a frigate, sail it to the north edge of the island, just out of magic range.

Then, sail due east (or west), loop around multiple times, and watch the enemies bunch up on the north shore. Blast any pursuing sea monsters or frigates. Keep looping until the land monsters seem to stop spawning.

When they’re all dead, check the south shores, east and west of the starting point. 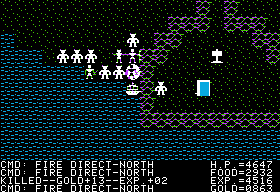 I got 931 pieces of gold in about ten minutes, which is slightly better than my best dungeon delving attempts, but also more consistent, and doesn’t require the micromanagement involved in constantly going back to town for supplies and spells, or deplete your tools.

And if you’re doing this late in the game and get your ring stolen? No problem – you can just buy another one with all that gold, though you might want to ensure you’re ready to take on Minax before doing that.

GAB rating: Below Average, and this is generous. By the standards of today, when it is no longer impressive to have a world to explore, and it is taken for granted that a game will perform quickly enough that simply moving around isn’t a slog, Ultima II is indeed a bad game. All of its improvements over the original have been seen in subsequent Ultimas and other RPGs.

By 1982 standards, Ultima II has the biggest and most varied game world yet. Every town has a unique layout and personality, every dungeon floor is a maze full of its own tricks and traps, discovering and exploring new locations like New San Antonio and Pirates’ Harbour is fun, getting a hold of an airplane is a feat that definitely feels earned, and even late in the game, there’s a sense of wonder in visiting the planets of the solar system and seeing their new vistas, if you aren’t in a hurry to get the game over with by then. But between the horribly tedious gold farming required in order to get anywhere, the somehow too basic and also too convoluted stat upgrade system, the bizarre difficulty curve that ensures nearly every encounter is either a cakewalk or certain death, and the dearth of motivation to bother exploring every nook and cranny, you may well be.

I don’t mind that Ultima hadn’t quite found its groove yet. I don’t mind the silly game world - though it absolutely did benefit the series when they found a more grounded setting for it – and I don’t mind the fact that character progression and related mechanics run completely against modern expectations. Ultima 1 worked well enough despite some very strange game rules; EXP was currency for buying spells and had no other benefit, HP was earned mainly by killing monsters in the dungeon and collected on return to the surface, levels were gained by elapsed gametime and determined stores’ stock but had no direct benefit to the character, and stats were increased by visiting shrines. But figuring out the rules was half the fun, and the systems more or less worked in the context of overall gameplay; EXP, gold, and HP got built up through natural gameplay, towns would get better stuff over time, eventually selling you aircars that would help complete the lords’ quests, and you'd build up your stats naturally while doing them.

But here, the systems don’t mesh well at all. All meaningful progress is tied to gold. You just don’t get enough of it to sustain your life, let alone improve it and buy the things you need to win, unless you go out of your way to farm it. You may as well get all of your farming out of the way at the earliest opportunity, as the reward curve is nonexistent. Magic is completely unusable outside of dungeons, which play a much more limited role than they did before. The main quest critical path can barely be started at all until you have improved your stats to the point where you can kill guards, which is significant. The planets constitute nearly half of the game content, but there’s no reason to visit them except to see weird stuff.

Ultima II is an important step forward for the open world CRPG, and technically far ahead of anything else before it in several ways, but there are big problems with the execution, and it’s just not very fun to play.

My maps of the overworld: 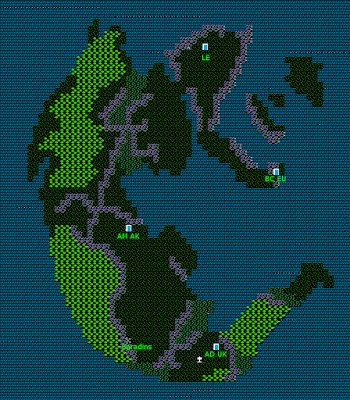 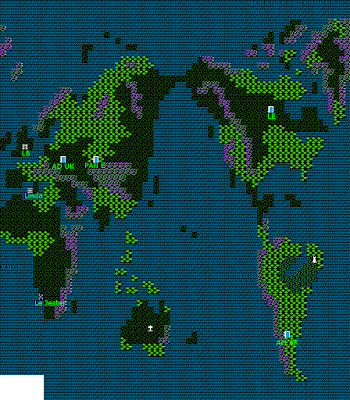 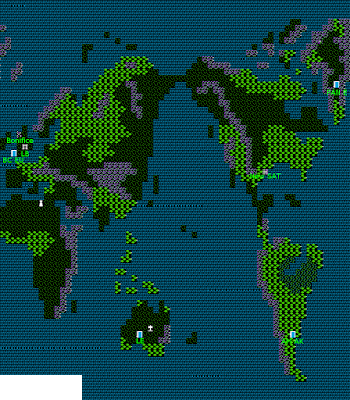 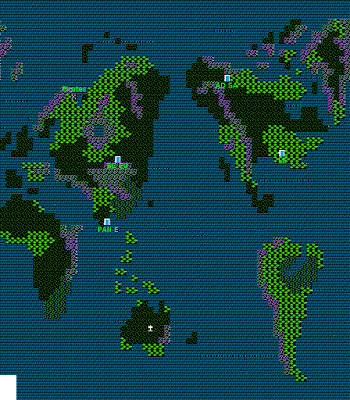