Get Mission Impossible for TRS-80 in “cmd” format here:
http://www.trs-80.com/wordpress/archive-search/

Our first game of 1979 is also our final one by Adventure International.

Unlike the two games before it, I could find no information to confirm that this was originally a BASIC game. Ira Goldklang’s TRS-80 software database has an entry for “Mission Impossible” in BASIC, but the author is unknown, and there is no downloadable file, so I don’t know whether or not it is the same as Scott Adams’ adventure. Mobygames lists its first release as May 1979, which is around the time that Adventureland and Pirate Adventure were re-released by TSE in assembly format, so perhaps Mission Impossible was developed in assembly to begin with.

The package blurb states:
Time is of the essence as you race the clock to complete your mission - if you fail, the world's first automated nuclear reactor is doomed. So, tread lightly and don't forget your bomb detector! If you survive this challenging mission, consider yourself a true Adventurer. Looks like I started the game a minute too late! But what am I carrying? 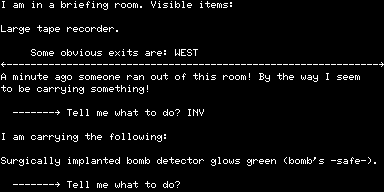 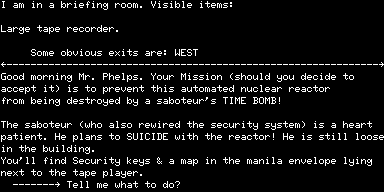 The keys and map aren’t there. The guy who ran off must have swiped them. Why does the nuclear power plant have a briefing room?

I went exploring. The first several rooms are a bit maze-like, with grey and blue corridors with many different exits. Occasionally I bump into “someone,” who runs away before I’m allowed to react.

Southward is a grey room with a chair facing a mysterious box with colored buttons. Messing around proves to be a bad idea. 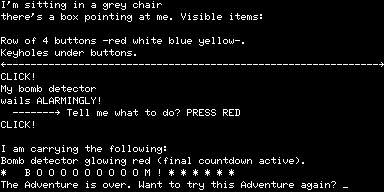 Exploring around more, I found the saboteur, and the stuff he swiped. 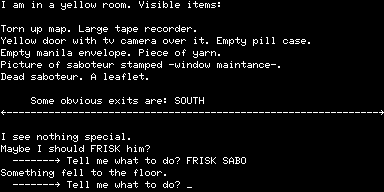 The leaflet is yet another plug. 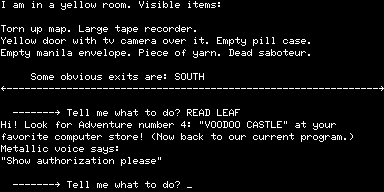 I tried showing the picture to the camera for authorization, but being a window maintenance guy isn’t good enough here. It said “INADEQUATE AUTHORIZATION.”

Going back to the buttons, pressing red and then white caused the box in the room to print out a visitor’s pass with my picture on it. This got me access to a room with a locked window. So I tried typing “BREAK WIND” (why not?) and was asked what item I should use. The two heaviest items I’d seen were the tape recorder and the dead saboteur, and using the saboteur seemed a bit morbid, so I tried the tape recorder first. It worked, but the camera in the room activated and my bomb detector started going nuts. I tried showing the camera the saboteur’s window maintenance ID, but it complained that I didn’t look like the guy in the picture. So I dragged the saboteur’s body into the room, and the camera shut off and all was well.

Through the window I found a yellow key, which unlocked a button in the panel in the photo room, which printed me a shiny new maintenance ID with my picture, and got me access to a few rooms past a yellow corridor. Here, I got stuck. The rooms here contain a wire cutter, mop, and empty film projector, and I couldn’t find a use for any of them. So I went to a walkthrough, which said you need to FRISK MOP to get a blue key. 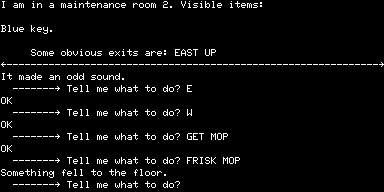 The blue key unlocks another button in the photo room, which gets me a security ID, and access past a blue hallway. I got stuck here again; the rooms past here contain a radiation suit, a vat of heavy water, a window that I couldn’t seem to break (I tried throwing the saboteur through, and that didn’t work), and a locked metal door. The walkthrough says you need to kick the door.

Past the door are a control room with a bunch of gadgets, a film cartridge standing out most among them, and a break room. Heading down from the control room, I reached the reactor core, and found the bomb! 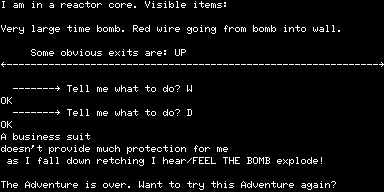 Clearly, I should have taken the radiation suit.

Restarting, I retraced my steps pretty quickly, made it back to the control room, and this time I took the film cartridge. I brought it to the maintenance area which had a film projector, and then played it from the visitor’s area. 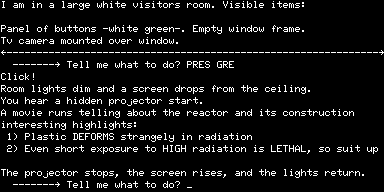 So I returned to the security area, with wire cutters and a plastic pail from the maintenance rooms, and retrieved the radiation suit and some heavy water from the storage room. Going down to the reactor core, both of the film’s warnings manifested. 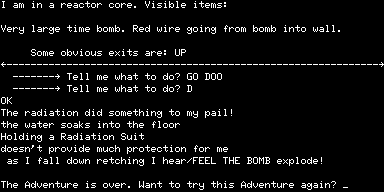 Whoops, guess I was supposed to WEAR the suit! In previous games, just holding clothing in your inventory counted as wearing it, but not any more.

Restarting yet again, and retracing my steps even faster, this time I dropped the pail of water in the control room and wore the suit before heading to the reactor. I cut the wire, brought the bomb back upstairs, and poured water over the bomb. 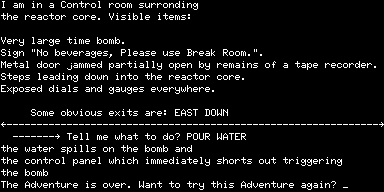 In retrospect, the “no beverages” sign was a clue that I wasn't supposed to do that. Time for a slight plan adjustment. This time, I dropped the bomb in the break room instead of the control room. 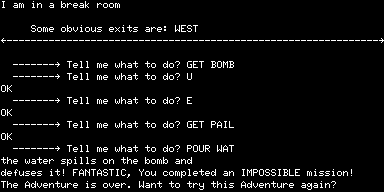 So, that’s the last Scott Adams adventure that I plan to play, and it was the least interesting of the three that I did play. There are some positives; there’s a decent sense of setting with a mostly logical layout (except for the briefing room inside the power plant), there’s some modestly clever signposting, and even some implicit storytelling through the items and locations. But the game map is tiny, even by Adams’ standards, with a single hub area and three minuscule sub-sections blocked off by security cards. The sequence for solving the game is totally linear, which mean the game grinds to a halt the moment you encounter an obtuse puzzle and can’t deduce the solution or solve by trial and error.

It’s also not a particularly great adaptation of the show. The IMF worked as a team, carefully orchestrating a complex web of deceptions for their targets. Here, you’re alone, you have no particular abilities except for a bomb detector surgically implanted in your body, and all you really need to do is find keys that the saboteur hid, bypass an inexplicably insecure security system without activating his triggers, and then disarm the bomb, which the saboteur put in plain sight in the reactor core.

The Scott Adams adventure series continued into the 80’s, with four more produced before the end of 1979, and another four produced in 1980-1981, still using the same engine. Later titles were produced with an upgraded engine that supported graphics, and six of the twelve original adventures were graphically remade. But I’m unconvinced that they served much purpose, even in their day, except to tide over adventure fans who owned entry-level computers. Adventure International’s final games were produced under an envy-worthy license deal with Marvel Comics that afforded Adams an amount of creative freedom that would be unthinkable today, but disappointing sales killed the studio. Adams retired from the games industry, quietly breaking hiatus twice since by releasing new text adventures in 2000 and 2013.