There's a neat little trick in The Black Onyx that I discovered at the eleventh hour, which exists as a consequence of the ability to save anywhere you want, and allowed me to finish The Black Onyx without grinding further levels on a floor that was simultaneously too dangerous to survive and too stingy with XP to be worthwhile.

First, go to the floor you wish to explore and/or grind, and save. The healthier your party is, the better. Now go roam the maze, but, if someone dies, don't reload - just walk back to the exact square where you saved, press "A," to be prompted to add a party member, and type in the name of the deceased. They'll be instantly added back to your party in the condition they were when you saved, including their drug stock.

This won't work miracles - characters revived this way lose their XP gains, and you'll need to be able to pull off a retreat with a partially depleted team without suffering a total party kill, but with this technique, and some luck, you can gradually remove all of the dungeon's loot-yielding monsters, which greatly reduces the overall encounter rate, and with some clever (and pragmatic) finagling you can seriously optimize your healing. E.g. - Kasumi and William were near death after a fight, so I had them use their drugs to heal everyone else, but not themselves. Kasumi was soon killed, so I went back to the start, revived her, and she got her drugs back along with her post-save health bar.

I made the loop around the maze with this technique, finding several magic tabards along the way (for whatever good that does - it's still not clear to me this makes a difference), and unlocked the entrance to black tower at the center. This time I was more careful about ascending it - the tower remains a 2×2 region on every level which you can exit but not re-enter, but by being mindful about which corner I occupied and which direction I was facing, I easily climbed all the way up to the town level, and then one more flight of stairs to the top.

Here, I got more than half my party flattened immediately.

And yet, thanks to the discovery that let me get this far, I knew I could keep on going. I just descended right back to the bottom floor, resurrected, and climbed the tower again, this time disembarking on the town level to heal and restock my potions. Upon returning to the bottom floor, the black tower remained open, and I did not have to repeat the grand multicolor tour to unlock it again so long as I didn't quit to the main menu.

The top level is a big, open plain with lots of very powerful monsters. The only landmarks are black teleporting walls strewn stochastically. I quickly lost my bearings and with it any hope of locating the stairs back down, but before long I stumbled right into the game's namesake.

Then everyone reached level 10 and I was allowed to keep playing, but without any other goals, there wasn't much point. Combat, by the way, is still quite deadly on this floor, even at level 10. I did, through brute force searching and saves, find a way back to the stairs, but nothing in town was any different, and the friendly townspeople still said "Good luck finding the Onyx!" when spoken to.

GAB rating: Below Average. The Black Onyx is functional, I suppose, and at least in its early stages works as an introductory RPG, but thanks to the simplicity is never all that interesting to play, and eventually becomes unreasonably difficult for the tiny breadth of tactical options provided. Playing through was not at any point particularly fun or satisfying, and toward the end just got infuriatingly tedious.

Edge Magazine credits The Black Onyx as the first JRPG, but other than having a general sense of streamlined gameplay mechanics, being a double-distilled adaptation of an RPG adaptation crafted for an audience without any cultural familiarity of the concept, it bears little resemblance to the regional classics that would follow. Wizardry and Ultima may have arrived late in the land of the rising sun, but their impact is more easily observed and are more widely credited as influences.

Still, Black Onyx did come first, and was enough of a success that it may well have influenced the direction of Japanese RPGs, if only by paving the way for Wizardry and Ultima's success. With some imagination, one can conjecture more direct connections as well.

As I mentioned, dialog options, though not so useful here, remind me of the Megami Tensei series, in which you could talk to monsters and sometimes recruit them, bargain, or intimidate. 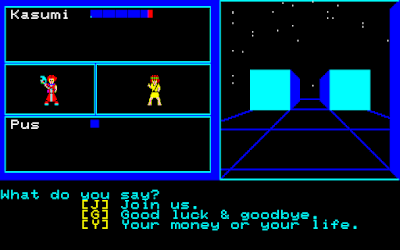 Diegetic signposts in town oddly remind me of Might and Magic II. Did JVC somehow play this? 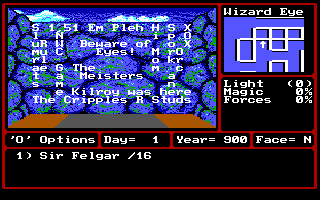 And the stark combat interface, with windows subdivided between status lines and sprites for you and your opponents, reminds me slightly of the first Final Fantasy's battle interface, which also had visible weapons on your character sprites showing what you had equipped. 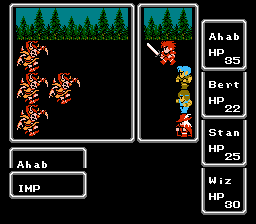 We'll be seeing a lot more Japanese games in this phase than we have in years earlier, including three more RPG-adjacent titles selected as discretionary whales. 1984 was the only year of the 80's not to have any culturally significant commercial RPGs developed in the U.S., but overseas, this was a pretty major year for genre milestones.