Read the manual here:
https://www.mocagh.org/loadpage.php?getgame=sorcererfolio
Get Frotz (if native Windows execution is your wish) here:
http://www.davidkinder.co.uk/frotz.html

Infocom was just as prolific in 1984 as they were the year before, releasing five new games in their usual assortment of literary styles, starting with Sorcerer, the follow-up to 1983's Enchanter and informally the fifth game in the Zork saga. Sorcerer was also their first to run in MS-DOS; prior games ran on PC as self-booting floppies. Mark Blank and Dave Lebling, the chief minds behind Zork and Enchanter, wouldn't be involved this time, but handed the reins to newcomer Steve Meretzky, who proved his talent for writing and worldbuilding with Planetfall the year before. 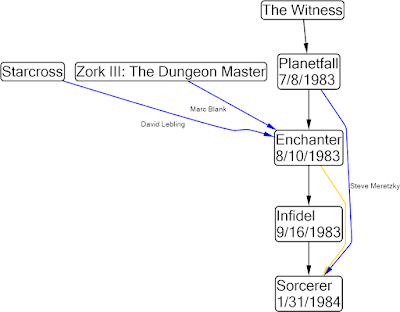 The manual, taking the form of an issue of in-universe Popular Enchanting magazine, is disappointingly light on plot material compared to the goodie-filled folios of games past like Infidel's letters and Planetfall's recruitment brochures. Apart from a short cover story that recaps the plot of Enchanter and notes Belboz's rumored retirement, and a few ads at the end, it's all gameplay instructions, re-using Enchanter's D&D-like magic system in which spells must be memorized from your book, Gnusto transcribes lesser scrolls into it, and the more powerful spells are a one-shot deal. Potions, it's noted, play a greater role here.

Sorcerer opens with a nightmare of being chased in the woods by a hellhound. I climbed up a tree to get away, only to be eaten by a boa constrictor, and then woke up in bed at the Enchanters' Guild, where the game began proper.

Frotzing my own spellbook so it could illuminate my darkened chambers, I began exploring and Trizborting. A note outside the room explained the absence of my fellow enchanters, and noted the unexplained disappearance of Belboz. In his quarters, opposite mine, his parrot alerted me to a hidden key, which I found behind a tapestry. To the north, the Chamber of the Circle's walls were engraved with the guild's code. To the south, the Frobar and Helistar's chambers were sparse except for a scroll of Gaspar, a spell of self-resurrection.

Before long, the game told me I was hungry and thirsty, and soon after the doorbell rang. A magazine had been dropped through the mail slot in the lobby, south of the main hallway. I then passed out from hunger and died, and though the Gaspar spell resurrected me, I was still hungry and immediately starved to death again. I think that of all the gameplay conventions that died out with the commercial text adventure, the need to eat and drink (and the related trope of needing to find fuel/batteries for your light source) are the ones I miss the least.

Restarting, I survived the initial nightmare a bit longer by running from the hellhound, but got hit by lightning a few turns later. I searched Belboz's room more thoroughly, finding inside his desk, a small jewelry box with a magic amulet, an "infotater" - a copy protection wheel, and a locked journal which could not be opened with the key nor a rezrov spell. As I searched, the parrot's squawks suggested some struggle between Belboz and an unknown assailant.

East of the lobby was the library, where an unlisted variety of subjects may be studied, and a "Meef" scroll for wilting plants lay in the dust. I cast it on a huge plant in Belboz's quarters, where it worked, but to no obvious usefulness. And I starved to death again.

Restarting again, this time I took a different path out of the nightmare woods, and then stepped on an active landmine. Much like real life, you're just not getting out of this dream alive. This time, though, I found the guild store room, where a potion permanently alleviated my hunger and thirst. In the cellar below was a trunk with four colored buttons, a puzzle I was certain needed the infotater in order to solve but lacked its cipher key. A magic nymph in the lobby prevented me from leaving, warning me that I was the last enchanter here.

I did start to tire while mapping out the guild, so after completing the map, I went to bed, and then a menacing, unidentified wizard burned down the place, told me I'd never rescue Belboz, and transported me to a "chamber of living death" where flesh-eating beetles ate my face for all eternity.

I needed a walkthrough, and found two things I missed. The first, less immediately useful note was that a depleted matchbook found in the store room, which I assumed was a red herring since enchanters use Frotz for light, can be mailed in for a free Vilstu potion, which lets you survive without breath. The second was that Belboz's journal is, in fact, opened with his key. "Unlock journal with key," which is what I had tried, does not work, but "open journal" while carrying the key does. Arghh!

The journal's contents, we're told, are mostly bookkeeping and meeting minutes, but the final entries concern an ancient force of evil known as Jeearr, which Belboz had been researching in secret, and soon give way to an unreadable demonic script. Finally, the inner cover revealed the cipher key needed to turn the infotater to the color combination needed to open the trunk in the cellar. This contained a one-use teleportation scroll, which I invoked to get to Belboz, or at least as close to him as its magic allowed.

It brought me to the woods from my dream, where, as before, a hellhound was chasing me. Here, the game world truly opened up, though the immediate surroundings were, also as in the dream, quite lethal. The deadly boa constrictor waited up in the trees, an impassable minefield stretched up north, and a venomous snake pit descended below. To the east, locusts could be seen across the horizon on a meadow, which would eat you if you lingered. North from there, a treacherous river bank will give way into the rapids if you walk the muddy path too much. East of the meadow, a rotting drawbridge to a castle drops you into the predator-filled moat if you attempt to cross once too often.

After charting the initial few rooms, the world mellowed a bit, and I was able to chart out much of it.

The Glass Maze is a rather frustrating MOTLP. On one hand it's not so terribly designed - the passages do not twist, and only orthogonal direction are used. But the walls are glass, and there's no way to know what the exits from any given room are except to exhaustively bonk into each wall of each room. What's even worse is that some of the rooms have no floor, and walking into them causes you to fall and die. You've got to have a flight spell active - and they don't last long at all - to survive, and even then you've got exactly one turn to either descend or pick a valid exit (and it's anyone's guess).

But the worst part is the rooms with no ceilings. You've got to check each one by learning the flight spell, casting the flight spell, and flying upward. If there is a ceiling, you smack into it. If there isn't a ceiling you ascend a level, and then you have to guess which direction is an exit. Guess wrong and you smack into a wall, and then your spell wears off and you fall and die.

I mostly mapped out the maze - it's a 3x3x3 cube, but I couldn't quite reach the top-northeast corner of it where I presume the exit is, as this room exists at the top of two cube-heights up from the bottom floor, and your flight spell doesn't quite last long enough to go that high.

With 83 rooms mapped out and a sense of the world and its challenges starting to take form, I picked this as a stopping point for now.

My Trizbort maps (so far) -

Email ThisBlogThis!Share to TwitterShare to FacebookShare to Pinterest
Labels: Infocom