On the face of it, Tennis seems like an ideal fit for the Famicon's early capabilities. You've got two controllers for two players, a d-pad for moving around the court, two buttons for hits, a single static playfield, and a computer to automatically referee and keep track of the needlessly obtuse scoring rules. With Shigeru Miyamoto at the helm, whose dedication to ensuring perfect controls borders on obsessive, what could go wrong? Nintendo's Tennis seemed well positioned to take Pong into the next generation with greater realism than past consoles could afford.

Well, the first sign of trouble came from reading the manual. 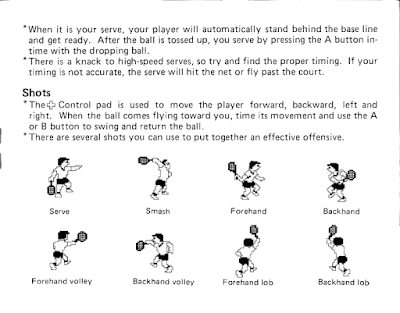 It outlines eight types of shots, but doesn't tell you how to execute any of them! A swings, B lobs, but you're on your own figuring out anything more granular than that. In several sessions against the computer, I never completely figured out what controls shot type, or how to manage aim and power.

There's also no way to play a vs. match against a human opponent, which seems like a huge waste. The only two-player option is a doubles match against an AI team.

I played a few doubles matches with "B," who plays tennis in real life, and neither of us could figure out how to control the ball. The recorded session is a nearly point-free game in which we lose 12 for 12 games.

"D", also a tennis player, tried and raged at the game. "I can't control where the fucking ball goes," she belted after losing a set six for six, before spiking the controller into the recliner.

GAB rating: Bad. Tennis was a frustrating experience that didn't result in any fun for any of us. If something as basic as how to aim the ball is neither self-explanatory nor can it be explained in the manual, then something went very wrong in the design phase. Pong managed this over a decade earlier, on a controller without any buttons!

Curiously, the arcade port Vs. Tennis, released in the U.S. just a few months later (arriving here long before the NES), absolves much of my misgivings about the Famicom original. It's still not clear to me how controlling the ball works, but however it does, the model just seems to be more forgiving, as more often than not, the ball went more or less where I wanted it to go. It also adds a two player vs. mode, and even a four-player doubles mode, and also adds a female player model. Annoyingly, though, but necessarily thanks to the arcade format, losing three games gets you a game over. In a multiplayer vs. match the losing player can insert more coins to continue or allow the AI to take over, but in a solo match against the AI this isn't an option.