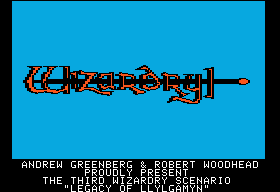 One last game to wrap up 1983, it's time to venture back into Wizardry one last time for quite awhile, as the next game doesn't come out until 1987! My party from Wizardry II still resides on a backed-up DSK file, but alas, they'll only make the journey forward in spirit.

The manual is longer than Knight of Diamonds', but still scant, with only six pages of content covering the backstory and gameplay notes particular to this scenario. Legacy of Llylgamyn wasn't a standalone game but a scenario disk, and requires characters from the original Wizardry, though somewhat arbitrarily.

Many years have passed since the events of the last game, and the magic of the Staff of Gnilda has kept peace and prosperity. But even though this enchantment had been completely effective at stopping war, sabotage, and highwaymen, it's done nothing to fight an even more existential threat which has gotten worse and worse in recent years - climate change! With the total destruction of an island colony in an unprecedentedly huge tidal wave, and earthquakes wracking Llylgamyn to its core, the people fear end times. Llylgamyn's leaders have tasked a new generation of adventurers, the descendants of the heroes of the Proving Grounds and the Knight of Diamonds, to venture into the mountain lair of the ancient dragon L'kbreth to recover a magic orb which may reveal the source of this chaos. Better than just ignoring the problem and doing nothing, I guess.

The boot disk opens with a first for the series, an illustrated intro recapping the events in the manual.

As with Wizardry II, you must first make a scenario disk - this works fine in AppleWin now - and then import characters from a previous game's scenario disk. Wizardry II expected you to use fairly high-level characters who had probably beaten Werdna, though this wasn't absolutely required, in order to have a chance of surviving its dungeons and monsters, which proved quite a bit deadlier from the get-go than those of old Trebor's proving grounds. Here, the character level isn't so important.

There's no reason that Wizardry III shouldn't just let you roll new characters except to force you to own a copy of the first game, because all imported characters reset to level 1 and lose all of their gear. These aren't the same characters, but their descendants, who take after their ancestors' namesakes and professions. Apart from getting the ">K" designation on your character sheets, the only benefit of importing Wizardry II veterans, as opposed to rolling fresh ones in the first game to import here, is the possibility of starting the game with elite classes, and even that has its drawbacks. Elite classes get less HP and take forever to level up, so it's arguably much better to train a fighter to a high level and then change to an elite class.


My party composition, as it was at the end of Wizardry II:

No thief was accounted for; in previous games I found that thieving ability was less useful than having a third fighter, and treasure could still be collected by using priestly magic to identify traps and simply tolerating the effects of less severe ones. Also joining the next generation was Fred the Bishop, who was not a regular party member, but I'd keep him at home for his class ability to identify items.

The benefits of multiclassing had, unfortunately, been undone by the rite of passage. I knew this would happen, and for that reason, chosen not to make anyone in my main party a prestige class character in the previous games. The party imported was predominantly good to allow the possibility of switching some well-trained fighters to Samurai or Lords later on, but I knew I'd also need an evil side party to finish the game. But that could wait.

I went shopping for my initial gear. Battle axes and armor for the fighters, a flail and cuirass for the priest, and daggers and robes for the mages. Parker got to splurge on a $1500 set of plate armor, Bo and Sam had to settle for lesser armor, and the total bill came to $3000, exactly what we came in with.

We went to the lair. 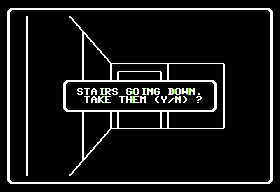 Wizardry III's new engine now displays fullscreen 3D graphics instead of consigning the view to a tiny window in a corner of the screen, bringing it to parity with the DOS ports that I was familiar with before. This engine, unfortunately, comes at a speed cost, as moving around is slower than it used to be, though speedier still than Akalabeth and Ultima I. Combat feels a bit sluggish too, which is tolerable when you're in a life or death melee and really need time to think about your actions, but excruciating when you just want to Fight,Fight,Fight,Parry,Parry,Parry through a trivial encounter.

Going through a door to the east, I found myself in a barracks, and quickly became attacked.


The guards fell easily to a combination of Katino and my battle axes, but I had been profligate with my magic, and so headed back to the stairs to recharge. Some crawling kelps surprised me on the way back, and I spent the rest of my Katinos to subdue them, and all of my priestly magic to heal. The two fights yielded enough money to buy two shields for my fighters, but not nearly enough XP to gain any levels.

My second trip made it through the barracks and into an area warning me "BEWARE OF MOAT MONSTERS!" A few steps forward, and I indeed had to fight moat monsters, who proved tougher than the Garian Guards, but no less susceptible to Katino. With their gold (are tourists tossing coins in the moat?) I bought a third shield, upgraded the priest's armor, and got the mages daggers instead of staves. The latter, I noticed, reduced their armor class by a point.

I continued exploring timidly. Other monsters I found included:

Even without finding out what's on the other side of the moat, I reached level 3, improved my party's longevity with more HP and spellpoints, and earned enough money to buy breastplates, sallets, and heater shields all around. Oddly, for all of the encounters so far, only one left a chest, untrapped and containing an unnecessary battle axe.

With access to the light-giving Milwa spell, I spotted some secret doors in the starting area, which I was sure I had seen before intermittently, taking me to a hidden beach. 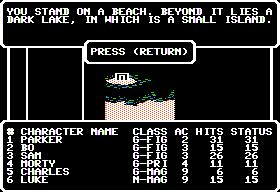 There was nothing here but impassible water, though, so I continued to explore the barracks and fortress. With my improved endurance, I finished mapping the barracks, circumferenced the moat, killing three sets of monsters, explored a bit of the fortress and beat up the Garians I encountered, and walked away with enough XP for another level up, and enough cash for two more sets of plate armor.

The starting area also had a door to the north, which I entered, but found nothing beyond it except corridors, rooms, and encounters. By now, though, I was feeling pretty invincible, able to beat most of the encounters without even needing magic and taking barely a scratch for it. The Garians frequently ran at the sight of us. I re-cleared the barracks and two of the three moat monsters before my HP and magic started to seem like they were running low.

The gold rewards I reaped could only improve my heavily armored fighters so much; their plate was already the best armor they could buy, and magic shields and gauntlets cost thousands of gold for minimal gain over standard shields and bare hands. Boltac's most premium item, an enchanted broadsword, would cost 10,000 gold.

Slowly healing everyone's inflated HP with Morty's spells was getting tiresome too. I hadn't missed the rigamarole of resting in town, going back to the dungeon, casting DIOS a few times, going back, and repeating.

After reaching level 5, I was able to sweep the entire level without rest. The fortress was full of Garian Guards - hardly a challenge any more - and several dropped treasure chests, though with only so many CALFO casts and no thief I had to give up most of them. At its center a "High Corsair" miniboss was flanked by Garian Captains. My fighters ganged up on the former while my mages targeted the support, and they went down without too much trouble. It pained me to pass up their treasure, but that's the sacrifice you make when forgoing an otherwise useless thief.

Past this room was a message from L'kbreth: 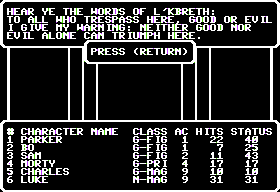 Four doors lay ahead of my fatigued party. One led to an empty room, two to stairs upward, and one to a portal back to town. Back there, everyone reached level 6, and with my gold I bought Boltac's most expensive armor, a Breastplate+1, which only had benefit for the priest.

Wizardry III's initial pace echoes back to the original game. As opposed to the power trip of Wizardry II, the third one forces you to start over with level 1 characters, but only throws things at you that you can handle. It's perhaps a bit more difficult, as this time around you should know what you're doing.

So far, I'm not enjoying this as much as the first game, but there's a stronger sense of setting. This first level doesn't just feel like an artificially constructed maze - it's a pirate fortress complete with a moat and adjoining barracks. But combat is rote - use Katino on big groups of pirates and fight them until you win. Options were always limited with a low-level party, and Wizardry III introduces no new gameplay mechanics. The experience is old hat by now, and the slower gameplay speed, which hadn't been an issue when I played the Wizardry Archives versions in DOSBox so many years ago, is already wearing on my patience.