Our next whale, Alley Cat, is one of the best known computer games of the early 80's, though perhaps better known for its 1984 PC port than the Atari original. That's the version I played in the early 2000's, thanks to its wide distribution as freeware and surprisingly good compatibility with Windows XP era systems.

Its designer, Bill Williams, created two games prior in 1982, both for Atari computers; Salmon Run through the Atari Program Exchange, and Necromancer through Synapse Software, who would later publish Alley Cat and Commodore ports of both earlier titles.

Synapse Software was, in its heyday of 1981 to 1984, the largest third party publisher of Atari computer software, originally focusing on databases, but soon expanded into computer games.

They published two games in 1981. One, Dodge Racer, is a clone of Sega's Head-On, and of no interest to me. The other, Protector, seems like a blend of Defender and Scramble, and was originally published by Crystalware, but republished by Synapse after a bit of playtesting, debugging, and polish. This holds a bit more interest to me, but the link to Alley Cat seems too tenuous to require inclusion in a retrospective leading up to it.

Synapse released several games in 1982, and the most well known of them appears to be Shamus, by a considerable margin. This game, which contains little sleuthing but plenty of shooting and is very obviously inspired by Beserk, is the title I've selected to play as an introduction to the company. 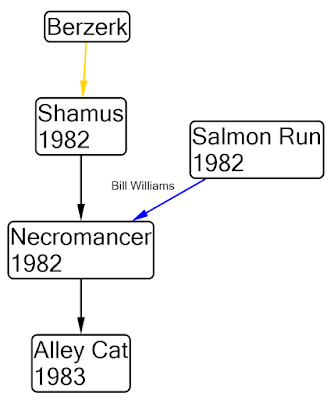 Just like in Berzerk, you run around a maze full of robots who are trying to kill you. The walls are deadly to touch, you attack in eight directions (by throwing "electro-shivs"), robots have a tendency to shoot or crash into each other, and if you tarry too long, an invulnerable, wall-passing opponent spawns and chases you, though unlike Evil Otto he can be stunned.

Where it differs, though, is that Shamus' maze is hand designed and has an absolute endpoint. Colored keys and locks mean a lot of backtracking, and the robots, which come in five different varieties, respawn whenever you enter a room. With 128 rooms spread over four color-coded zones, each one designating a higher difficulty level than the previous, with faster, more aggressive robots, a full playthrough takes over half an hour. It took me several nights to beat Shamus, but each time I made it farther and farther in, filling out more of my map. At least that was until I reached the Red Zone, where things were frantic, and here I made a single save state about halfway through. It was just enough to reach the lair of the villainous Shadow and toss an electro-shiv through his yellow keister.

The game then restarts on a higher difficulty, but I'm cool. Novice mode was hard enough.

GAB rating: Good. It's a bit too difficult and too long, but Shamus is overall a good take on the Berserk formula, and feels better suited to the home experience with the addition of a structured game world and end goal. It's crying for a pause button though - thank heaven for emulation!