Technosoft, like many Japanese developers outside of the big third party names, is a bit of an enigma. Despite owning a Sega Genesis back in the day, I hadn't heard of them at all until 2015 or so, and when I did hear their games discussed, it was usually within Sega fan circles, discussing their efforts during the early years of the Genesis, before the SNES posed serious competition. In-depth discussion of games from the years before are rare, thanks to their unavailability outside Japan.

Thunder Force is, no doubt, their best known series; a shmup originating on 8-bit Japanese computers, years before finding mainstream success on the Genesis. This series alone isn't what compels me to look at it. The genre doesn't particularly interest me - occasionally there's one that stands out enough for me to want to play it, but most of the time they seem samey, and I've seen Thunder Force get praised much more for its soundtrack than for transcending the genre's gameplay conventions.

The impetus for this retrospective, in fact, has nothing to do with any Thunder Force game. 1989's Herzog Zwei is universally name-dropped as a crucial predecessor to the RTS genre, sometimes even claimed as the first RTS game ever, but rarely discussed with much substance. Its predecessor, Herzog, doesn't even get mentioned very much. Those games are years away, but I plan to play them both eventually. In the meantime, if I cover one game by a company, then I tend to play some of the games that led up to it, and hence I am now playing the two earliest known games by Technosoft, then called Tecno-Soft. 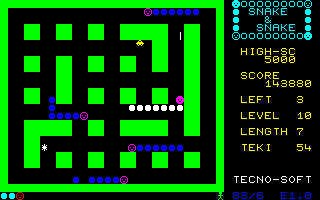 From its title and screenshots, you might think this is a Snake-type game, but it really doesn't bear much resemblance to anything in that family. The principal gameplay loop is killing rival snakes, and this is done primarily by eating them; at first by whittling them down to size with your acid spit, and as you grow big enough to eat them full-sized, by chasing them down and avoiding their spit (and the deadly UFO).

Mobygames lists releases on three platforms, none that I've emulated before; NEC PC-8000, Sharp MZ-80K/700/800/1500, and Sharp MZ-80B/2000/2500. The only copy I found was a cassette image for the Sharp MZ-700; a home-oriented machine featuring a Z80 processor, 64KB of RAM, and text-based graphics reminiscent of the Commodore PET, except in color. It's a weird mishmash of specs and abilities that overall seems outdated by the standards of 1982, but exceeds earlier computers in certain ways. Strangely, it lacks BASIC ROM found in virtually every other computer of the 8-bit era, and requires the user to load it into RAM from a cassette.

Upon loading the game, you may read instructions, which are written in something approximating English: 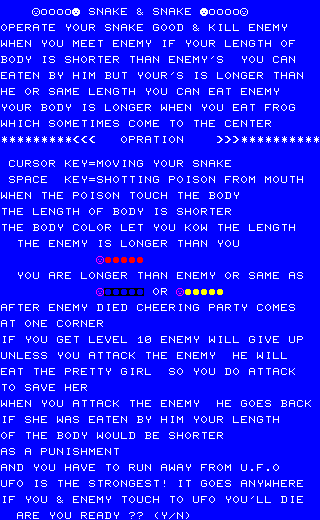 Here's what it all means:

And that just about sums things up. Snake & Snake controls a bit awkwardly, not like Snake-style games where you move automatically and have to time button presses to turn, but you directly control your snake's head, and the body, which is largely for show, follows. Collision with walls and snakes' bodies are not deadly. The whole thing just feels very jumpy and imprecise, as you move instantly with each keypress.

The key to victory, I found, was to never pass up a chance to eat food, luring away the UFO first if necessary, and to be really careful not to die. You don't lose any length when advancing levels, so if you can lengthen yourself to the point where newly spawned snakes are shorter, you can just eat them aggressively, backing off only when food spawns, or when you start to get dangerously short from too many poison spitwads, or when the UFO gets too close.

Die, though, and you're reset to the initial starting length, and vulnerable. Returning to your former glory on the later, more difficult stages is no simple task.

Beat level ten and you're rewarded with a message. 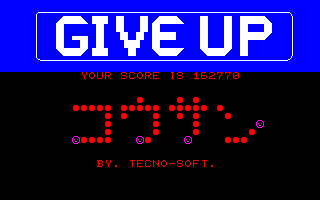 GAB rating: Below Average. Snake & Snake isn't horrid, but it's simplistic and pretty rough-feeling, like a BASIC title, only faster than most.


The first game in Technosoft's most famous franchise originated on the Sharp X1, a disruptive successor to the MZ series. Though it never achieved the domestic popularity of NEC's PC-88 line, which Thunder Force was ported to a year later, it's still considered to be one of the "big three" Japanese-exclusive 8-bit microcomputers, and made Sharp an important player in the industry.

The X1 was simple enough to emulate in MAME. Like the MZ, it lacks BASIC, but the "IPL" firmware program can automatically boot from tapes in the cassette drive, which is something I've never seen before. It even rewinds the tape automatically once loaded!

The game is hot garbage, barely playable. It's clearly inspired by Xevious with its look and feel and dual weapon system, although the gameplay is structured more like Bosconian, with 8-way scrolling and a goal of destroying enemy bases.

The first and most obvious problem is that the game moves way too fast for its poor framerate to keep up. That wouldn't in itself be a game killer - Snake & Snake's action quickly devolved into barely readable chaos, but it was forgiving enough that one could cope. Thunder Force isn't forgiving; on brand for the genre, one hit kills you. The bullets often blend in with the terrain, and low framerate robs your eyes of crucial temporal information.

Then there's the issue of your bombs. There's an on-screen reticle like in Xevious, but it isn't completely accurate. Your bombs appear to land only a few pixels away from your nose, and judging precisely where is difficult. I had better success in hitting targets by mashing the button whenever I got close, and even that wasn't too reliable.

The goal of each stage is to locate "shield bases," which is done by systematically destroying every ground target until they reveal small blue dots, which you must bomb with impossible precision.

This isn't fun or interesting, and wouldn't be even if the game otherwise handled flawlessly. The bases, though positioned randomly, seem to only appear in a select few locations which don't change level to level, so if you were stuck playing this game for months without any alternatives or anything better to do, you could finish each previously-mastered level relatively quickly. A 6 1/2 hour longplay on Youtube plays through 100 levels, and even in that one, the player commits suicide upon reaching level 101.

Once you bomb all the shield bases, the level transitions into a trippy outer space setting, and you've got to find and destroy a target to advance to the next level.

I haven't been able to pass the second level, and I don't want to keep trying.

GAB rating: Bad. Thunder Force had to start somewhere, but retrospective reviews tend to gloss over this one. The Thunder Force Gold Pack for Sega Saturn doesn't even include it. I'm sure the real reason for its western obscurity is its exclusivity to Japanese microcomputers, but it looks bad and plays worse, and doesn't really seem worth discovering, especially as its creator wasn't even involved in its sequels.

A 1984 floppy-based re-release has tweaked graphics, with bigger bullet sprites that stand out better, and if I'm not mistaken, the bombs' hitboxes are more forgiving. You get ten lives rather than four, and in this version I was able to reach the third level on my first and only try. It's an improvement, but not nearly enough to get my recommendation.

Tecno-Soft would release two more games in 1984; Plazma Line, a space flight game with primitive 3D polygonal graphics, and a backgammon game. After that, Kotori Yoshimura, the creator of both Thunder Force and Plazma Line, left the company to found Arsys Software, and Tecno-Soft's output ceases to be until 1988, when they rebranded as Technosoft and self-published Feedback, Herzog, and Thunder Force II for the new generation of home computers. Soon after, they became a console-focused developer with a strong partnership with Sega. But that's something for quite a bit later.

Email ThisBlogThis!Share to TwitterShare to FacebookShare to Pinterest
Labels: Technosoft