Arcade games always lose something in translation to the home experience. The days of watered-down NES ports are long behind us, but even today's cycle-accurate emulation can't replicate the feel of being at a physical machine with controls and cabinet artwork designed specifically for the experience of playing one game. 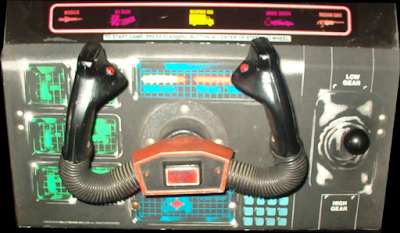 This holds especially true for games like Bally Midway's Spy Hunter, where the controls are unique and the control panel is integral to the gameplay. The machine features:

The yoke is poorly simulated by a gamepad, let alone a keyboard, so in preparation not just for Spy Hunter, but for the driving games to come, I bought a USB steering wheel. It won't work well with all driving games - a lot of the early ones like Night Driver, Turbo, and Pole Position use free wheels that measure turning speed rather than distance turned, but for Spy Hunter, whose steering yoke drives a potentiometer, this is a reasonable approximation. The wheel has face buttons which can be mapped to the triggers and center button, and the accelerator pedal is, well, an accelerator pedal. Spy Hunter's weapon dashboard is simply displayed as a HUD overlay in MAME - not quite as attention-grabbing as the real thing, but functional enough.

There's just one non-straightforward thing to configure here, which is a common issue to several driving games in MAME. The shift stick here is a toggle switch, either low gear or high gear, with no neutral position. MAME, by default, maps this to a toggle button, which you tap to toggle between the gears. This is fine for most people, but if you've got a wheel with a stick shift as I do, this isn't ideal.

To change this, load the game, and then (temporarily) map the Gear Shift control to something you'll recognize easily, like the 'G' key. Quit MAME, then go to MAME's cfg directory and edit the "spyhunt.cfg" file. Look for the XML element that controls Gear Shift, which you might only be able to identify by the keymap you just assigned.

All you need to do here is add toggle="no" to the port element's attributes.

Then you can load the game again, and remap Gear Shift to one of your gears, so that you can naturally shift up and down. In my case, I picked 4, and now gear 4 means "high" and neutral (or any other gear) means "low."

If you want the inverse, so that neutral means "high" and your mapped input means "low," just edit the cfg file again and add the word NOT to the input element.

Spy Hunter basically wants to be every James Bond car chase scene in video game form, and reportedly even played a synthetic version of the Bond theme in an early build, only to be replaced with Henry Mancini's Peter Gunn theme when they couldn't get a license.

As a muscle car-driving spy hunter - or are you a spy being hunted? - your mission is to simply survive as long as possible, driving down series of roads full of hostile drivers. Armed only with a pair of forward-firing machine guns, these will be adequate for the first few seconds of play in which you'll likely only encounter hostile cars from behind who are easily taken out. Only black cars should be shot at; anyone else is a civilian and will cost you points. Eventually you'll pass by a van and may call it for support by pressing a flashing button - enter the van and you'll get a new weapon, either an oil slick or smoke screen for dealing with enemies behind you, or anti-air homing missiles for shooting down helicopters.

Around the same time as getting your first weapon - likely earlier unless you get lucky, your enemies will get deadlier, and start spawning behind you, following in pursuit. "Switchblade" cars with slashing hubcap mechanisms straight out of Goldfinger will blow out your tires. Armored vans impervious to your gunfire will ram you off the road, or into traffic, or sometimes just total your car by merely connecting. Shotgun-toting enforcers in limousines will attempt to pull up beside you and shoot a 12-gauge hole through your radiator, or wait for you on the shoulders. Sometimes a blast instantly destroys you, sometimes it does nothing, and I'm not sure if it's possible to determine what causes it.

Among the least enviable situations is when any of these are hot on your tail without an oil slick or smoke screen in your arsenal, as trying to get them to pass you is extremely risky, and going fast enough to outrun them without fatally slamming into something ahead of you is quite difficult. The best tactic seems to be to switch into high gear and using the throttle to regulate your speed, keeping ahead of them but not getting out of control, which is easier said than done even with a steering wheel and pedal setup, and probably not feasible without one.

What's even more difficult is when hostiles are both behind you and in front of you. It's no good to just barely keep ahead of the pursuit - the foes ahead of you will close in. You've got to shoot them if possible and dodge their wreck at high speed, or throttle up and try to pass them. Nor is it any simple task to pull into a weapons van while several switchblades and armored vans are on your tail.

Owing to the unforgiving difficulty (and high price - a game costs two tokens by default), Spy Hunter has a grace period of 110 seconds in which you have infinite lives, and only after this time expires is it possible to get a game over. Unfortunately, this doesn't do much to help if you can't survive that long to begin with, as losing your car means losing all of your weapons except for the limitedly useful machine guns, robbing you of your best chance of surviving long enough to get a rear-firing weapon. Especially infuriating is when, right after pulling back onto the road from losing a life or collecting a weapon, a random vehicle just comes in out of nowhere and crashes into you. Deliberately staying on the shoulder until speed picks up can somewhat offset this risk, but it doesn't always work.

My best attempt scored over 50,000 points and made it to a motorboat section, a gameplay mode not seen in the demo loop. Here, your car turns into a gunboat and you have to deal with helicopters and sea mine layers. This part, in theory, seems like it should be easier going, as there's less enemy variety, and the helicopters are less deadly as their bombs don't leave any dangerous potholes in the river, but it's also pretty monotonous and gets boring once the novelty wears off.

GAB rating: Average. On the plus side, Spy Hunter looks nice, with its realistically proportioned and animated sprites, the control scheme is novel, and its high concept is well realized. But the difficulty factor is more frustrating than challenging, and success and failure often feels dependent on luck. Blowing up because a car just randomly came out of nowhere is irritating, as is being forced into car chases without having any suitable weapons at hand. It's also, honestly, quite a repetitive experience, with most of the possible scenarios playing out in a five minute session.

Spy Hunter had a sequel in 1987 which by all accounts was terrible and will not be covered or otherwise acknowledged in this blog. A reboot series began in 2001, followed by another reboot in 2006, and another in 2012. The most widely played rendition, though, was probably an NES port developed by SunSoft the same year as its maligned arcade sequel.