I am so unqualified to review this game. I already don't care for sports video games in general, or enjoy anything at all about professional team sports of any kind, and am especially uninterested in football, to the point where I'm not even completely sure what the rules are. I did cover Football Manager (the other kind of football) back in 2019, but the actual play mechanics are really just about balancing your team's skill level and rotating players to manage fatigue. Computer Quarterback, rising superstar Dan Bunten's first and most successful game released through SSI, claims to be a comparatively deep simulation of the sport, based on years of painstaking mathematical analysis. Although SSI's business was in wargames, football, with its field of engagement, its centralized planning and control of coordinated action, its impenetrable (to me anyway) diagrams of X's and O's to depict attack and defense strategies, its endless supply of statistics, and its shockingly high rates of traumatic injury makes the sport well suited to be simulated as one simulates war, the play-calling quarterbacks its front line generals.

As a necessary aside, Bunten would undergo sex reassignment surgery in 1992 and live the rest of her life as Danielle Bunten Berry, but would refer to her past self as "him" on her personal webpage. For the rest of this post, which only concerns events of 1981 and prior, I will too.

Computer Quarterback's roots date back to 1976 when Bunten, a certified industrial engineer, developed a football game simulator in FORTRAN on a minicomputer at the National Science Foundation. In 1978, he designed his first commercial computer game Wheeler Dealers, which included a custom-made peripheral for simultaneous four player bidding action on the Apple II. Sales were abysmal, and there don't seem to be any copies of the game on the Internet or any pictures of its peripheral. For his next product, he would return to his old simulator and construct a playable game around its mathematical modelling of the sport. This sort of detailed modelling and boardgame-like play structure was a perfect fit for SSI's catalog, who insisted on the addition of a computer opponent to play against. It became an early offering, and like several other of SSI's earliest games, was later given a second edition featuring hi-res mode graphics and other enhancements. This second edition, also ported to Atari and Commodore computers, is the only version that seems to still exist.

The crux of the game is plays. During each down, offense and defense both choose a play, and after that the outcome is up to chance. Every combination of plays has a distribution of outcomes - we're told, for instance, that a Z Post against a Key Man has a 28% completion rate with a mean gain of 36 yards, 8% interception possibility, 15% chance of trapping the quarterback, and a 1.5% chance of a fumble. The manual has a chart showing gains and completion rates for the 208 combinations of standard plays, but doesn't break down the distributions further. 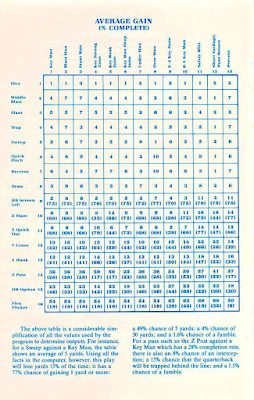 The result strikes me as something like a combination of rock-paper-scissors and craps. Think your opponent on the offense might be going for the long shot Flea Flicker? The Prevent defense has a 94% chance of stopping that, and pretty good odds on other passing plays, but it's crummy against screens and runs, though those can still fail spectacularly against any defense.

Not listed here are field goals and punts, two options for offensive plays, and punt returns, an option for defensive play.

I played a match with "B," who knows a bit more about football than me, but is far from being a fan. 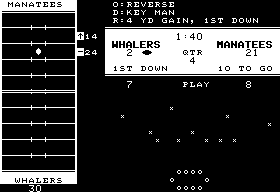 Weirdly, Computer Quarterback requires paddles to play, and I'm not entirely sure what the goal here was. You turn the paddle to select a number representing a play. Offense commits to a play by tapping the button three times (each producing a beep, suggesting "hut, hut, hut"), and then you see the plays called and watch the ball move. 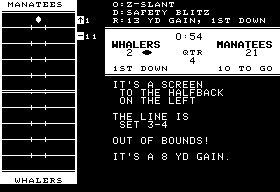 By using paddles instead of a keyboard, each player can see what the other one is doing and adjust their tactic. Maybe I'm missing something as someone who doesn't follow football, but I can't see how this does verisimilitude any favors. I had assumed that teams decide their plays in secret. And that once they see how the defense is shaping, that maybe they can make quick tweaks, but certainly not completely change their strategy. But here, all it takes is a nudge of the dial to change your play from "Reverse" to "Z Slant" when you see that your opponent has "Short Yardage" selected.

I'm also not sure what the point is from a pure gameplay perspective. Offense can change their play as a reaction to a defense, but defense can't in the reverse. Once offense commits, it happens, and if defense hasn't also committed, then it will be disorganized and ineffective. To ensure defense has a chance, only defense may commit during the first five seconds of play selection. 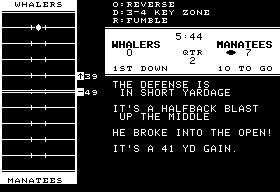 The odds do seem to be in offense's favor - mean yardage for almost every combination of plays is greater than the 2.5 that you'd need to average in order to win 10 yards every four downs, but either "B" is much better at this game than me, or I got very unlucky. Possibly both. He would consistently meet or beat the odds, while I would usually come up short, even when I picked the optimal (according to the chart) attack for the defense I was going up against.

Penalties against my team were also more frequent and more severe. The other team always has a choice to refuse a penalty, but I'm not sure why you would do that. 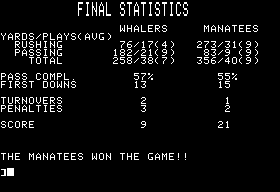 "B" said he had more fun with this than he expected to, but also felt like his win was more from luck than skill. He did play with more of an anticipatory style, while I played in a more reactive way, which in theory should have given me an advantage on offense, but evidently the theory is either wrong or it's subject to luck that just wasn't on my side.

Computer Quarterback has some options that we didn't and won't delve into.

GAB rating: N/A. Like I said, I don't feel qualified to cover this game. It wasn't meant for me, and even after playing my grasp on how things work is loose at best. So I won't rate it.

Bunten's notes do say that Computer Quarterback was conceived as a simulator first, and that the "game" aspect was more of an ad-hoc addition, albeit one that took over a year to implement. As simplistic as the interactive elements might be, they're oddly anticipatory of M.U.L.E., in that a simple input device allows simultaneous multiplayer action, with incredibly complicated math going on behind the scenes to dictate the results. In any event, SSI's playerbase seemed to like it.