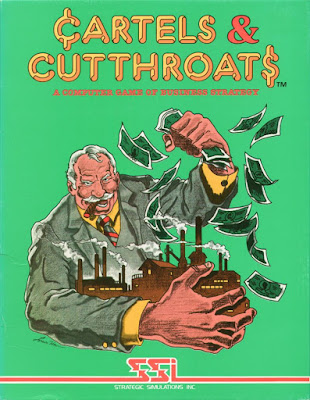 Run your own megabucks corporation in the economic jungle of Big Business, states SSI's 1982 catalog. A collaborative effort between Dan Bunten, a self-described "systems simulation expert," and his brother Bill Bunten, MBA, Cartels & Cutthroats is alluded to in the appendix of Computer Quarterback's manual, which describes Dan's aspirations as a simulation engineer to educate and to solve real-world problems in government and industry through detailed mathematical models, a dream that he felt personal computers would make a reality. He is presently developing proposals for a business management game, an 18th century naval wargame and a strategic world energy simulator for educational purposes, it says.

Only the first of these three proposals became an actual commercial product, in which you, as the president of a consumer goods manufacturer/oligarch, manage the company on a quarterly basis, making a small number of basic but critical decisions such as how much product to manufacture per quarter, prices, and directions for expansion. Minutiae such as hiring, firing, warehousing, and financing are left to your subordinates but modeled and presented in your quarterly reports, along with performance indicators, economic forecasts, and marketing research data. 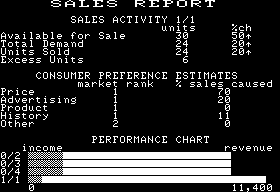 If this seems a little dry, well, it is. The economic simulation aspect anticipates M.U.L.E. but while that game abstracts most of the complexities beneath a deceptively simple-looking veneer (and gleefully punishes naiveté with ruin), Cartels & Cutthroats is front-loaded with an intimidating amount of simulation data and results. Consequently it feels more like a set of spreadsheets than a game, and a spreadsheet is indeed a useful tool for planning - physical copies came with paper spreadsheets meant for this very purpose. I would bet you could reproduce the game in its entirety in an Excel template file. This stark difference in presentation can be attributed to Bunten's rapid transition from "systems simulation expert" to "game designer" just as much as it can be attributed to the philosophy differences of respective publishers SSI and Electronic Arts.

The play mechanics, in fact, remind me very strongly of one of the first MECC games, Lemonade Stand. The simulation is intended for elementary school children and accordingly simplistic - your only decisions are to decide how many glasses of lemonade to make each day, how many signs to make, and what price to charge, and the only external factors are weather and ingredients price. Derivative calculus shows that ten cents is always the optimal price to charge per glass, leaving it up to trial and error to figure out the exact amount of lemonade that can sell given the weather conditions. Figure that out and you can sell out every day.

Cartels & Cutthroats is essentially an undergraduate-level version of that same game, with more dimensions and complexities, including elements of competition alluded to in the title - price-fixing cartels, and cutthroat power plays.

The game is set over a number of quarters, in which each player reviews their company reports and makes plans for the next three months:

Typical for a Dan Bunten game, play focus is on multiplayer. Games have between 2 and 6 companies in competition. Not all must be human controlled - you can have AI control as many opponents as you wish - but you can't communicate with an AI opponent, robbing the game of diplomacy and scheming if you opt to play solo. Three multiplayer game modes are offered:

I played an open, eight-quarter game with my partner "D," whose patience and support has been legendary, and with one computer-controlled opponent. 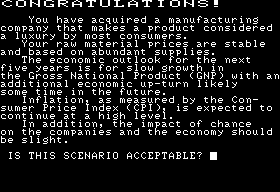 The scenario is randomized, and each parameter impacts your business tactics.

Between quarters, a document summarizes the economic conditions to come, and when applicable, compares company performance. Here, PPI means Purchasing Power Index and can be roughly understood to mean the number of units an average consumer can afford this quarter, assuming the cost rises proportionally to inflation. Prime interest rates are the lowest interest rates available - ours will typically be somewhat higher. 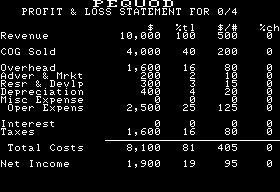 There's a lot to take in, and this is just the first page, but the key takeaways here for me is that in the previous quarter we made $10m (gross dollar values are implied to be in thousands), and spent $405 on each unit sold, making $95 profit on each. All of the other numbers are just subitems.

"COG Sold" here means "cost of goods sold" and covers the costs of labor and materials on the products sold.

One very stupid feature of the game is having paddle controls to flip through the pages of the reports, and this is the default method! Thankfully there's an option to use the keyboard's left and right keys instead, and I can't imagine why anyone would prefer the paddle. Unfortunately the beginner's game doesn't even give you that option. 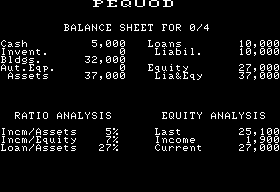 The next page isn't terribly interesting to me - basically a breakdown of how big your company is, and most of my spending decisions are based on credit lines rather than by cash on hand. Cash reserves are handy for knowing when you can start to pay off loans, but you've got to spend money to make money. 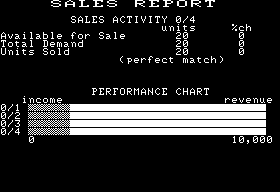 The sales report is very useful! In Q0, we made 20k units and sold 20k units, matching demand exactly. To sell more, we'll need to up the advertising budget and manufacture more units to meet increased demand. In subsequent quarters this page will tell you how your decisions effected demand and whether your supply met it, exceeded it, or came up short, and help you to adjust if necessary. 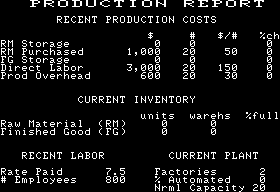 The production report outlines production and warehousing costs. Three things interest me for planning - the direct labor, which costs $150 per unit, production overhead, which is a flat $600k and will increase as my operations grow, and "normal capacity," which means that with my current number of factories I can only produce 20k units per quarter without paying overtime labor wages. 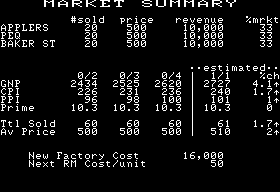 Finally there is a market summary page, and the most useful part is the estimation that 61 units will sell during Q1. My performance is also compared to my rivals, but for now we are all equal.

With about $24m of funds available, I decided to continue manufacturing my normal capacity of 20k units, but upped the price to $525. I put $1.5m into advertising, $1.5m into R&D, and bought a factory for $16m. "D" acted similarly, but did not raise her prices, and funded advertising over R&D.

I was ahead in revenue, having sold out even with the highest price. "D" told me I won capitalism. But this can be misleading - the game is won in terms of equity growth. Both of us had spent quite a bit more than the AI did, and that's not reflected here. Investments are necessary, but all investments fetch diminishing returns at some point.


Starting on Q5, we both ceased all investment in R&D. There just wasn't enough time left for ROI. 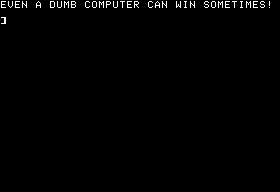 Lessons learned - don't spend that much on advertising, and always give into the unions. Intuiting the right amount to spend on advertising probably comes with experience rather than devising an exact formula. R&D was a bit of a sore spot - it seemed like I spent a lot on it during the first year, and nothing at all came of it.

I kept records of the game. "Q0" represents a sample quarter assumed to have occurred before the start of the game, and exists mainly as a starting point from which you can work out your plans, which the manual recommends doing in small adjustments.

Afterward, I played another round against just the computer. This scenario was characterized by necessity goods and a slowly declining economy. Prices quickly became a race to the bottom, and I managed to undercut the AI and decimate its sales every single quarter, but my own profits were razor-thin even as I cornered the dwindling market. My only R&D advancement improved factory output, which hardly helped me - why couldn't it lower production costs instead of giving me more product that I wouldn't be able to sell anyway?

Weirdly, even though the final status report said I outsold the AI, spent less money than the AI, and grew equity (not much) while the AI's shrank, the final screen still claimed the "dumb computer" won, which suggests to me that the victory conditions are bugged here. Oh well.

GAB rating: Average. Cartels & Cutthroats is damned impressive as a business economics model, and I can definitely see it being a good educational tool on the subject but talk about niche appeal. I love spreadsheets and numbers and still didn't find this very exciting or entertaining. I can see it having more appeal as a social game, especially with its closed-info gameplay modes that encourage diplomacy and scheming, but much like with wargames, you'd need to coordinate a group of players willing to spend weeks learning and mastering the game before it becomes interesting.

It wasn't an especially great seller, either. According to Bunten's game design memoirs, it underperformed compared to Computer Quarterback, though to be fair no business sim of the time would do that much better. Evidently folks interested in playing with the stock market or business, do it in real-life instead, notes Bunten.

But thankfully, one such real-life businessman, Trip Hawkins, took notice and offered to buy its publishing rights. When SSI rejected, he instead struck a deal with the Buntens to join Electronic Arts and produce a slick new game in its vein, which would feature Cartels & Cutthroats-like economics-based gameplay, Wheeler Dealers-like four-player auctioneering, and simple controls and presentation masking immensely deep math-based gameplay like Computer Quarterback. The freelance brothers agreed and expanded their core team to four, which EA would promote as Ozark Softscape and publish their first and most acclaimed hit M.U.L.E. We'll get to that eventually, but first we've got two more SSI games on the agenda, and one game by SSI's second most famous alumnus.