Once again, I don't know what I'm doing here. Baseball must be heaven for hardcore stats nerds, but only ones that care about baseball to begin with, and I don't. I do, at least, have a better grasp on the ball game rules than of football, but I have no idea what all the stats mean, or how to form a team or strategize ingame.

Computer Baseball was SSI's best selling title in its early years, and the Mobygames votes measure reflects this, coming closest to the whale threshold of every SSI game from before 1985. So, I'm going to play ball, or at least give it a try. 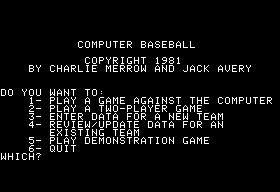 There are a few options on the title screen but the only one that interests me is to play against the computer. Computer Quarterback was designed as a multiplayer game, with an AI opponent only added in begrudgingly, but most, if not all of SSI's in-house games were meant to be played solo. There are also options to create new teams or view/edit data of existing ones, which must have made sports stats geeks very happy. 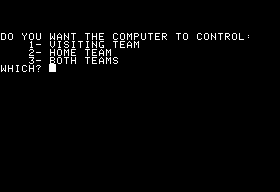 You can decide whether the computer should play visitors, home, or both, if you can't be bothered with the "game" aspect of baseball and just want to watch a simulated ballgame without having to play it. The difference between this and the demonstration game option is that the latter jumps right into the action with a fixed scenario, while this option still lets you pick the teams and other options. 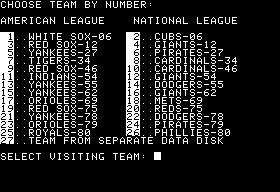 There's an unusual (I think) design choice in the team selection. Instead of offering a roster of current teams, the choices are mostly historical, and if I'm not mistaken, these are all teams that played each other in the World Series. SSI also sold team data disks with complete MLB rosters for 1980 through 1985, though you could probably just make them yourself by using the ingame team editor. 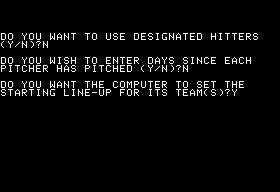 There are a few more game options. 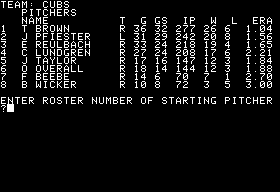 The first real decision is to pick the starting pitcher. Most of these numbers' meaning is a complete mystery to me, but I assume T is handedness and W/L is wins/losses, so I went with T. Brown, my most experienced pitcher.

The game then asks me if I want to designate any pitchers on the other team as unavailable. Computer Baseball sure is generous when it comes to giving me flexibility in making choices for the other team! But I opted not to, and the computer chose F Owen, who is also that team's most experienced pitcher. 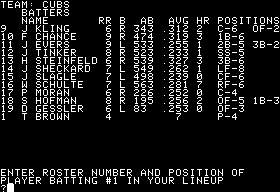 Next I have to pick player positions, but I don't get as much choice as it seems here. For instance, J. Evers can play second or third base, but nobody else can play second base, so he has to.

This screen tripped me up for a little while too, because if you pick an invalid set of positions, the game will error out and make you repeat the selection without telling you exactly what you did wrong. And the pitcher you select must be assigned to the role of pitcher - the game doesn't just do that automatically. Sometimes these SSI games just feel hostile to the player.

This is a game of stats and strategy, not skill, and victory is determined by your decisions and luck. The manual says that the most important aspect of defense is managing your pitcher's fatigue. You must anticipate when your pitcher will start to tire and warm up a relief pitcher in the bullpen before this happens. Leave him in too long and he'll tire out faster. Swap him out too soon and he won't be warmed up and will underperform for a few pitches.

There are five infield positions, which can be changed between pitches:

There are also two outfield positions:

Base runners can be held normal, loose, or tight, but I don't really understand the manual's notes on what this all means.

Finally there are three pitching strategies:

None of the options make sense for empty bases, so I just pitched. Simple graphics animate the results.

Computer Baseball does not simulate each individual pitch, but rather the outcome of all pitches until a hit, strikeout, or walk occurs. You'll never be in a situation where there's two outs, two strikes, and you just need one more strike to change over, as if baseball needed less excitement and drama.

The next pitch was a strikeout, and the third was a groundout. Now I got to bat. 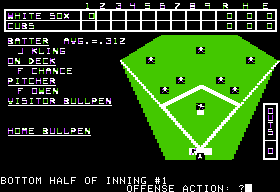 Offense options are less extensive than defense. First there are running strategies:

And hitting strategies, which are executed when entered:

My first batter hit to left field and made it safe on first base. Next I tried a hit and run, which hit a ground ball to the shortstop, outing my batter at first, but the runner advanced. A third batter hit a shallow fly out. With two outs I ran aggressively and hit, but it was a flyout to left field.

Top of the second. The first batter made it to first, followed by a flyball to right field. I went for a double play, but the first batter stole second. I changed to guarding the lines, but the next batter walked. Next the runner on second scored. Two line drives were caught by the shortstop and left field, ending the inning half, scores 1-0.

Bottom of the second. My first batter made it to first, and then second as the next one grounded out. Third batter walked, and fourth grounded out as the others advanced to second and third.

I changed tactics to an aggressive running, and it paid off - I hit a double to left field. After this play, the opposing team had a bull pen change. Then I hit a flyout to left field. Score: 1-2.

And then it rained, postponing the game, but the program said it was really cancelling the game, as this wasn't an official one. That was fine by me.

GAB rating: N/A. This was completely uninteresting to me, but I'm not the intended audience.