Coming from Miner to Lode Runner, it's hard to think of interesting things to say. Doug Smith spent six months working with Broderbund to turn his prototype into a full priced boxed product, and the work shows. The graphics are improved, with smooth running animation instead of stilted tilely movement, a wiggly animation when trapped guards are about to escape, and the digging action causes your stick figure protagonist to zap the earth with a sandblaster instead of just waving a pickaxe around. Controls are basically perfect with nary a missed input, and a very slightly slower running speed makes gameplay feel less twitchy without becoming sluggish, though you'll still want to use joystick mode as keyboard mode makes you awkwardly tap one key to start running and another to stop. AI pathfinding is improved a bit, and while it's still a greedy algorithm unable to solve any but the simplest problems, they don't exhibit quite the same batty self-destructive behaviors of the original. On top of all that, there's a WYSIWYG-style level editor, replacing Miner's terminal-style one.


The manual blithely ties Lode Runner to previous Broderbund games. You are a galactic commando tasked to infiltrate the evil Bungeling Empire's treasury and steal their gold, which was obtained through excessive taxes on fast food. If I may overanalyze this plot, consumption taxes are regressive in nature, and Broderbund's founder Doug Carlston, as an economics student, ought to know that. We're stealing money that's been taken from the poorest subjugates of the empire, and we're probably not giving it back to them.

Before Lode Runner, Donkey Kong impressed by having four distinctly different level layouts at a time when most arcade games only had one. Miner 2049er upped this to ten the following year. Jumpman had a whopping 30, though split into three tiers which, mercifully, could be completed independently of each other. Lode Runner puts these numbers to shame with an incredible 150 levels.

That said, all of these earlier games were constantly introducing new gadgets, gimmicks, and rules. Jumpman was possibly the most gonzo of them all, with surprise twists in nearly each of its 30 stages like platforms that explode when you jump, or shadow-copies of yourself that follow and kill, or parallel universes. Lode Runner's levels are all built from the same set of building blocks and offer no surprises except for what their designers could create with this unified set of tools.


It's difficult to imagine beating the whole game in one sitting, let alone doing it fairly. You can start on any level you like, but your high score only counts if you start from the beginning. Lode Runner is generous with extra lives, awarding one for every stage beaten, but this ultimately amounts to giving you two chances per stage before you start running a lives deficit. My experience, at least so far, has been of beating the majority of levels on my first try, running a good life surplus, which then gets rapidly drained when I encounter a difficult one and fail repeatedly. So far I have only used save states to pick up where I left off, and haven't needed to use them to recover lost lives, but I expect this to change quickly.


Being designed around so few building blocks, there are a lot of level-solving strategies that get used repeatedly. For instance, your commandp can only dig diagonally-down, never straight down, so in order to dig through multiple layers of bricks, you'll need to start by digging a number of spaces horizontally adjacent to each other. Dig a ditch three tiles wide, and you'll have just enough room to dig a second one below it that's two spaces wide, and from in that just enough room to dig a single tile-wide pit, at which point you'd better be able to drop in and come out safely on the other side or else you're doomed to premature burial.

My doom came on level 29, which I had reached in about an hour and a half of fair play. 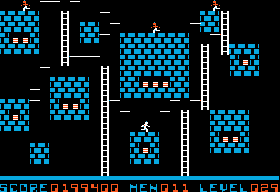 There are just so many areas here where the guards tend to congregate once you start approaching, and it's hard to coax them away so that you can get to work on digging the gold out. Landing on the floor at the wrong time can be a death sentence too; should a guard come between you and the ladder, you're dead meat, unable to trap him with a pit or find any other way up.

On top of that, the three "boxes" that contain a single-tile pocket inside pose a problem; you can get in them, but how do you get out? Once inside, there's no room to dig out! For two of them, the solution is to blast out a side wall from the outside before dropping in. For the one below your starting point, the bottom floor is false, and you'll just fall through.

I blew through most of my lives on this stage, and lost what I had left on the next one. 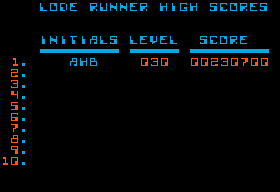 Lode Runner so far has been, at varying times, pleasant, thrilling, frustrating, perplexing, and satisfying, but never boring, though I've been pacing myself. Not every level is a winner, and quite a few are filler, but it's impressive enough that with such limited tools available there are still any levels, puzzles, and challenges that feel fresh 30 stages in. I can't help but wonder how much longer this will last.

The fair play, however, won't last. I could, I suppose, start from the beginning, and re-beat the first 29 levels with a minimum of trouble, giving me a stock of 30+ lives that I could use to get even farther. Barring the ridiculous single-session time commitment, it's nice to think that Lode Runner is a fairly doable game. You might not beat it on your first try, but with enough practice - and with the level select you can practice any level you want without having to first beat everything before it - you might just be able to master enough levels to power through the entire game on your surplus lives. In several ways, it's far more forgiving than Donkey Kong, Miner 2049er, or Jumpman. But this is a game with 150 levels, and a "fair" approach of using save states just to resume after breaks means lots and lots of replaying stages that you've already beaten, and I can't imagine too many people were willing to do that even at the time. I'll try to stick to my 30 minutes per save rule, which means I'll begin my next session on level 29 with 11 lives to spare and a somewhat better idea of how to beat it without squandering them.