It's over! I beat all 150 levels. In total I needed 49 saves to get through them all, each one representing 20 minutes or more of play.

On the last set of levels that I felt like writing about: 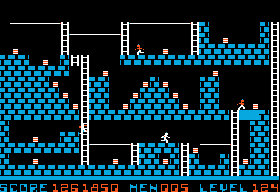 Level 124 can be made a whole lot easier by tricking two of the guards into dropping down into the depression near the lower-right of the screen. After that, the third guard tends to get stuck on the right ladder, leaving you free to gather crates from the rest of the stage at your leisure. False floors can trip you up, though, including a nasty one on the upper-right pocket that dropped me right into the guard's clutches. After clearing the stage, it may be necessary to free the trapped guards if they're holding onto a crate or two. 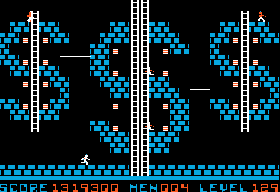 129 is just brutal. You'll need to drop down to the ground pretty often as this is not only sometimes the only way to evade guards on your tail, but four of the crates are suspended over false bricks that will drop you right there. Whenever you do, you'll have to reach the central ladder to get back into the action, and will probably have three or four guards to contend with, and whether you're getting flanked on both sides or have three or more between you and the ladder, it's bad news. Any guards on that ladder itself will also have to be dealt with. The really hard part here is putting enough distance between you and the guards so that you can excavate the middle dollar sign and grab the chests within without getting killed.

The winning strategy I found was to, through some mechanism I failed to completely understand, get two guards trapped in each of the corners at the top of the screen. That left two to patrol the level who could be managed much more easily than four. 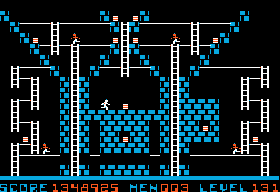 131's another really hard one. Right off the bat, you've got to dig and drop down, where four guards approach from two directions - never a good time. Going for the chest buried below at this point might seem like a good idea, but it's asking to be mobbed. Even if you can drop down and survive, you're still getting chased by four guards who can go pretty much anywhere you can. I found you can kill guards and make them respawn in the starting chamber away from you, giving you free access to most of the level, but you can't get in now.

I found some luck is needed to get into the central chamber a second time with the guards far away enough that you stand a chance of escaping with the crate. After that, there's still the problem of getting the four crates above it. The solution involves dropping from one of the upper bars through a false brick. 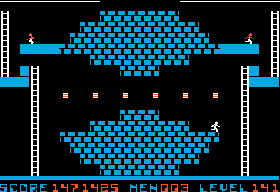 141's so minimal, and yet really difficult. Only two guards, but there's no way to get them away from the top part of the level, which you have to dig through pretty deeply in order to get at the two crates in the center. Figuring out a digging path already takes some tricky planning, and ensuring you don't get killed in the process is a matter of both skill and luck.

The solution I found is to lure both guards onto one side of the screen, then trap them on the upper row of bricks and while they're stuck dig like mad to tunnel a path to one of the crates on the other side, and if they die pray that they don't respawn on your side. This was the hardest level in the game for me, and the only one that I had to use a save state in the middle of to complete. 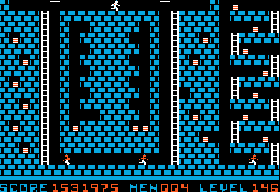 146 isn't terribly hard, but the repetitiveness of zig-zag digging down the structure in the middle can trip you up when you reach the bottom if you fail to realize that one of the platforms is shorter than the rest and dig too far on the row right above it. 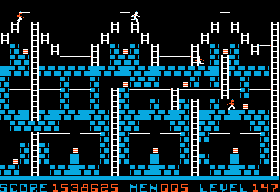 Then we go right back to another obnoxious level right away with several false bricks and plenty of places you can get cornered by guards, which is guaranteed unless you exploit some of their stranger AI behaviors (and figure out exactly where all of the false blocks are). 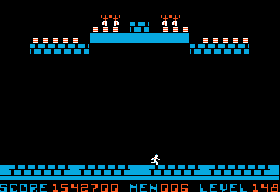 148 is a breather, but gets pretty chaotic. Dig a LOT to keep the guards at bay, but don't dig yourself in so deep that you get trapped. They'll die, respawn and retrieve more crates, and with a little bit of luck you'll be able to get them all. 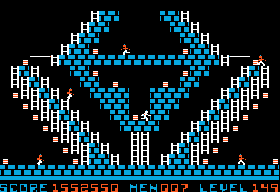 149 is rough. You've really got to know how to manipulate the guards here and keep them from congregating too much in the bottom-center of the screen, because you have to take a few trips into the structure in the middle, and the only way out is down. If a guard gets ahold of a crate late in the game, taking it back can be nearly impossible. 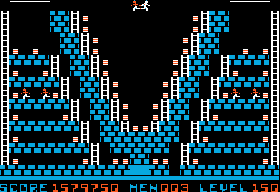 Finally, level 150 isn't that bad at all. It's difficult, but we've seen much harder. The side areas have plenty of places to trap guards, you just don't want to let too many creep into the center "V" area to bother you while you scoop up the crates there.

Two of the crates at the bottom, just to the right of the "V," look like a problem. How do you get them? Simple - dig a single brick at the bottom of the "V" and drop in through false bricks. But make sure you get them last because if you don't, there's no way out.

After this, there's no ending. The levels just repeat. The display bar will show level 151, but you're really just replaying level 1.

GAB rating: Good. For all of my bellyaching about it being overly long and frustrating - an issue that could have been remedied with some structural changes - I got more enjoyment out of the first few hours of Lode Runner than I got from several Good-rated arcade platformers that didn't have nearly as much content, and it delivered interesting puzzles right up until the end, if not consistently.

Lode Runner was one of the most successful games of its era, moving millions of units worldwide at a time when, to put it lightly, this wasn't common at all. Ultima IV, in comparison, sold 400,000, came out over two years later, and had the considerable advantage of brand recognition behind it. Between a third and a half of Lode Runner's sales were in Japan where Broderbund's founder Doug Carlston had forged strong business relations, and enjoyed numerous exclusive ports and sequels by Irem, Sega, Hudson Soft, Compile, and others. 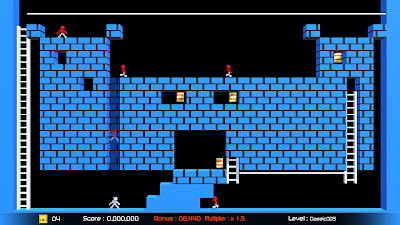 The original game lives on, in a sort, through Lode Runner Legacy, a reboot/remake which includes a "classic" mode featuring the 150 original levels and a voxel-based visual style reminiscent of Minecraft but with Lode Runner textures, which is all too appropriate here.

The 50-level "adventure" mode, which you must play through the first 10 levels of before unlocking classic mode, ramps up the difficulty far too slowly, and the controls feel a bit slippery compared to the original, but classic mode is everything it should be, controls included.

The biggest change here is that classic mode does away with lives and instead challenges you to score points on a per-level basis, allowing you to replay any level at any time. To better suit this approach, where score is not carried on from level to level, it revamps the scoring system to give awards and multipliers for various technical feats. This gives it a very different feel from the original 150 stage marathon, but it's for the best. It does, somewhat pointlessly, give you partial credit if you beat a level but fail to do it without dying.

There are also a bunch of smaller quality of life features added here that fix issues I had with the original game: