Although Data Driven Gamer mostly follows a linear timeline, I sometimes go back and play a noteworthy title that I missed out on in years prior. Usually this is because it precedes a planned whale of the current year, such as when I played Temple of Apshai and other early Epyx games as a very extended prologue to their breakout hit Jumpman of 1983. Less often it's simply one I felt was worth doing retroactively, with no particular reason for the timing. I think I've only done this once, when I covered Dungeon Campaign a few months ago, which isn't obviously of historical importance, but it was quick.

Walter Bright's Empire, not to be confused with John Daleske's Empire series on PLATO, is obviously of historical importance, being a major influence on Sid Meier's Civilization, and therefore of the entire 4x strategy genre. There are earlier games that anticipate it - Daleske played with 4x-like mechanics in the earliest incarnations of his Empire before refocusing on action, and an identically titled Empire by Peter Langston sounds even more Civ-like than Bright's despite being independently developed, but Bright's Empire alone is a verified inspiration.

Like most mainframe games, getting the original experience is a problem without a satisfying solution. Bright's homepage has links to the original FORTRAN code, but I wouldn't know what to do with it. I can emulate a PDP-10 with SIMH, and there are TOPS-10 images floating around, but I don't know how to get files onto said images, or how to compile the game if I do.

There are two DOS versions that I know of which predate Empire's later commercial release.

The earlier one of the two is curated by Ray Shoop, has a file dated to 1983, and appears to be based on an unathorized VAX/VMS port. The second is by Bright himself, and is a rewrite to MS-DOS in C. Neither one is exactly the same as the FORTRAN original, but I believe the former is the closer of the two.

All versions come with documentation, and it paints a picture very reminiscent of a stripped-down version of Civilization, one with no economy, no technology tree, but the same orthographic map and exploration, and a similar combat system. The goal is to conquer all of your opponent's cities - no diplomacy or space race here. City management exists but is limited to deciding what kind of military units should be produced there, of which the options are:

I played for several hours to figure out the ropes, and then started a new game. 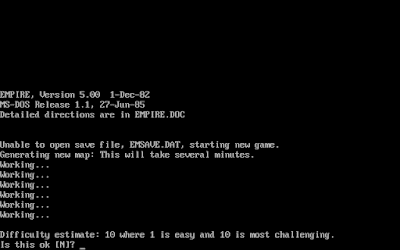 On starting, Empire generates a new world map. This can be fairly quick, but one time it took nearly 20 minutes, even at 10,000 DOSBox cycles. It offers a difficulty estimate, and I'm not sure what it bases this on, but you can reject the estimate and get a new number without having to regenerate the entire map. In this playthrough it offered me a maximum difficulty of 10, and I took it. 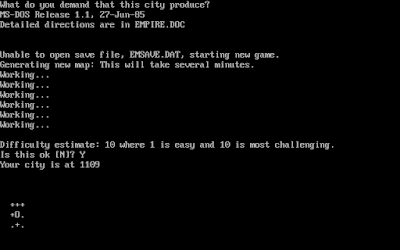 Starting off you get a single city, indicated by the letter O. This one is bordered by land to the north and sea to the south-east. Your first decision - what kind of unit do you want to build? I decided to start with a fighter for short-range reconnaissance, and then had the game just advance turns until it was built. 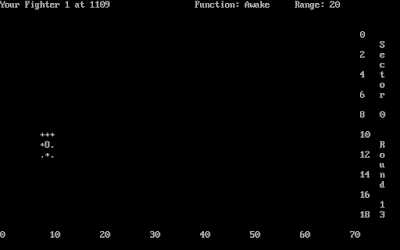 A confusing, vi-like aspect of the interface is its three "modes" - orders, move, and edit. "Move" mode is for moving your units manually, or giving them other movement orders like sentry or other conditional waits, or random movement. "Edit" is mainly for changing cities' building orders and waking up units in sentry mode, and also for changing the sector of the world visible on the screen. Units may also be given waypoints, and cities can be assigned waypoints to send fighters to upon landing. "Orders" is mainly used for switching between the other two modes, but has a few game options too, like summoning the help screen or quitting.

I switched the city to build my first army as I had the fighter scout around the immediate vicinity. It didn't take long at all to find some neutral cities to conquer.

Cities are conquered with armies, but each attempt has a 50% success rate. If you fail, your army is destroyed. If you succeed, the city is yours but the army disperses, reassigned to guard duty. Combat in general is always resolved instantly with the destruction of one unit and possible damage to the other, resulting in loss of HP and in the case of transports and carriers, capacity. Armies and fighters, having only 1 HP each, are all-or-nothing battles. City invasion is, essentially, an army-vs-army battle.

Internally, combat iterates over a number of rounds. During a round, each unit has an equal chance of winning, and the winner does damage to the loser. All units do 1 point of damage, except for submarines which do 3. Once one unit has taken lethal damage, it is destroyed and the combat is over. 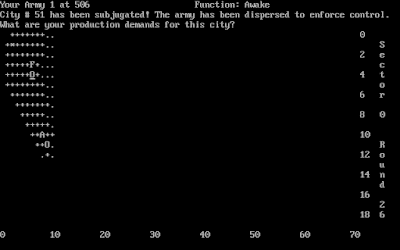 The first city soon fell. Being land-locked, it was only useful for building armies and fighters, but I continued my scouting.

Soon I had the island conquered, fully explored, and overcrowded, and there was nothing left to do but built a troop transport. As it built, I had my fighters scout as much of the sea as they could reach.

And my transport took them southward to conquer more stuff, while I kept building more armies and transports to ferry them. 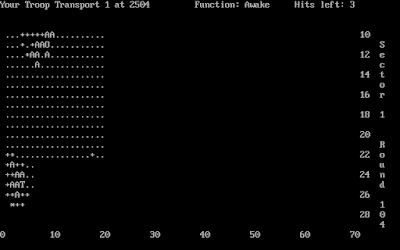 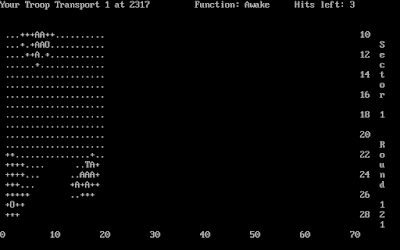 Soon I found an enemy city!

The fight to take it was long and difficult. The continent was full of armies and the channel patrolled by destroyers, fighters, and transports. The city changed hands a few times, and I only had one city capable of building sea units. The tables turned when I rallied my fighters on the west island and send them on suicide strafing runs, routing their armies and leaving the continent prime for a beachhead. 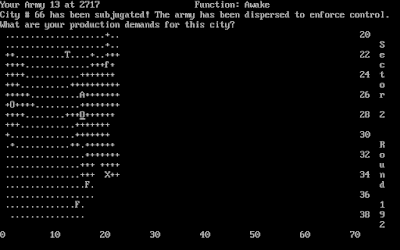 This didn't last though. The city continued changing hands, but ultimately attrition (and a suspect RNG that caused an entire transport's worth of armies to lose to a single city) wore me down. By round 262, they even invaded my starting city, and then I just didn't feel like playing any more.

I did play a few more sessions, but never finished a game. 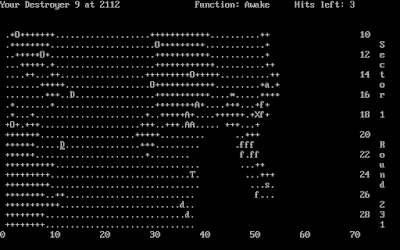 Here I had better luck securing multiple cities early on, but marshaling my forces en masse to break through the enemy's shores was just tiresome. I lost multiple full transports to destroyers, and ragequit. 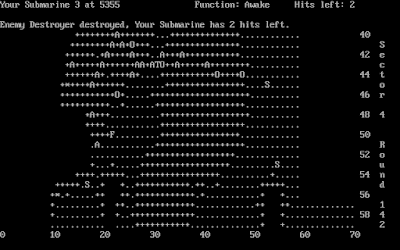 In this playthough I started on a big landmass with plenty of vulnerable cities and built many armies. But only one coastal city that had direct access to the sea, my ability to build a fleet was severely bottlenecked. I tried scouting and exploring with submarines, but while waiting for them to build and micromanaging most of them through the strait, my inland cities kept building more armies with nowhere to go. Rounds dragged on and on, and I quit out of boredom.

GAB rating: Average. Empire is impressively deep - staggeringly, even, when compared to other strategy computer games of its era, and although overall the interface is archaic and borderline user hostile, it's also surprisingly forward-thinking in many ways - I certainly didn't expect to see unit movement waypoints or city rally points, for instance. Despite all this, I didn't find it much fun to play. Games can quite literally go on forever, often nothing happens for hours, and when things do happen you are at the mercy of the RNG to a pretty extreme extent.

Bright's own DOS port, dated 1986, has a number of features over the earlier one I played, apart from looking so much nicer with its color IBMgraphics support.

Missing, though, are the game's sarcastic remarks when you perform suicidal actions like attacking your own garrison or running ships aground or marching your armies into the sea.

I'm sure I'd have had a better time playing this than I did the older port, but these enhancements are anachronistic in the context of playing a game dated to 1977. Just a year later, it would go fully graphical with Interstel's commercial release of Empire: Wargame of the Century, which is likely the version Sid Meier played, and I'll get to playing that when the time comes.

In the meantime, here's a GIF of a 400-round computer-vs-computer game being played at warp speed, because I can.