Why did Taito think we would want to play a game about elevators? Elevators are the opposite of action. The term elevator music is used as a metaphor for anything boring and uninteresting. Sales performance, nonetheless, proved they were right. 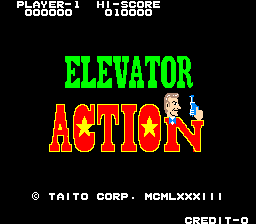 You play Agent Otto, a guy who looks like a silver fox in the title screen but an ordinary shlub ingame, which would be perfect for a secret agent, but unfortunately for him, everywhere he goes is infested with fedora-wearing counter-agents who want to kill him. Your mission is to infiltrate a 30-story tower by entering from the roof, descend to the basement, stealing all of the intelligence along the way, all of it kept in rooms marked with red doors, and escape in the getaway car parked in the basement's garage.

Your main method of descent is an overly complicated network of ridiculously unsafe elevators. Some floors have stairs, but for the most part you'll be riding lifts down the shafts. Counter-agents will shoot you on sight, but their bullets can be easily ducked under, or somewhat less easily jumped over, and they aren't so good at evading your return fire. In later levels they'll learn how to go prone, which will evade even your crouching shots, but eventually they'll stand up, or you can shoot them while descending. Trying to guess whether they'll aim low or high can be a problem sometimes; most of the time it's high, but you can't easily jump from a crouching position. You also can't crouch on the elevators, but you can change direction as they shoot at you.

An oft-noted tactic is shooting the lights out, but I'm not really sure what this accomplishes. You'll still get shot at in the dark.

I cleared three buildings and scored 32,550 points before getting bored.

GAB rating: Above Average. Elevator Action is a bit slow paced, repetitive, and primitive looking, but quite playable and there's a bit more depth here than it seems. There's just not much longevity.

Email ThisBlogThis!Share to TwitterShare to FacebookShare to Pinterest
Labels: Taito