Among the most celebrated aspects of computer games is the unofficial mod. More than a couple have even become official commercial products, such as Final Doom, and most famously, Counter-Strike.

Arcade games aren’t as well known for mods, but they’ve been around in the forms of enhancement boards and modified bootlegs almost since the beginning. Ms. Pac-Man is an early example of an arcade mod which gained official canon status, but before playing that, there’s a notable predecessor.

Super Missile Attack is an unauthorized mod for Missile Command, distributed in 1981 as an enhancement board by General Computer Corporation, which had been founded by MIT students the same year.

The principal enhancement is greater difficulty, as if Missile Command wasn’t difficult enough. Rounds get longer, missiles rain down harder, your own ABM’s get weaker, and a new enemy, the UFO, moves erratically and attacks with a laser weapon. The levels also have new colors and sound effects; enhancements recognizable as trademarks of Ms. Pac-Man.

Interestingly, my best attempt got me to level 10, the same level I reached on my best attempt at Missile Command, but with about 3,000 fewer points. Also interestingly, the score difference wasn’t due to a decreased city bonus – if anything, I was able to hold onto cities a bit better this time around – but due to fewer destruction points. For the higher count of targets falling in Super Missile Attack, I wasn’t able to hit them as often (and yet I did a better job of keeping them off my cities).

I skipped playing Pac-Man for the 1980 phase on the grounds that I’ve played enough of it already. Ms. Pac-Man, on the other hand, I haven’t played nearly as much.

Ms. Pac-Man started off as another unauthorized enhancement board called Crazy Otto, but Midway gave GCC the go-ahead to release it and collaborated with them to rework it into a full-fledged sequel, altering the sprites, text, and cut-scenes to better suit its status as a Pac-Man canon title.

The result is a familiar yet expanded and much more difficult game. There are four different mazes, as opposed to Pac-Man’s single maze, and monsters are less predictable, preventing “patterns” from working reliably.

As with Pac-Man, to be good at Ms. Pac-Man, you must understand the monster behavior. Fortunately, they haven’t changed much from the original. What follows is a selection of the information written in The Pac-Man Dossier, which is rich with exactly the kind of data that I love.
https://www.gamasutra.com/view/feature/132330/the_pacman_dossier.php

In any of these modes, monsters will never stop or reverse their direction. They will reverse at designated times, or when you collect a power pill, but never at any other time.

During chase mode, Blinky’s target is you. Pathfinding is a greedy algorithm – whenever Blinky reaches an intersection, he looks one tile ahead for all valid moves, and picks whichever one is closest to you (calculated by triangulation), regardless of the overall path. In the event that two tiles are equidistant from the target, he will prioritize up, then left, then down. All four monsters have this pathfinding logic, though their targets aren’t necessarily you.

Pinky’s chase mode target is four spaces in front of you, depending on which way you are facing.

If Pinky reaches his target, which is sometimes possible for him to do without killing you on the way, he’ll just keep moving past it since monsters can’t stop or turn around. Then at the next intersection, he’ll keep using pathfinding logic – take the tile that gets him closest to the target.

Due to a bug, if you are facing upward, Pinky’s target will be offset four spaces to the left of where it should be. Understanding this can further assist in throwing him off. 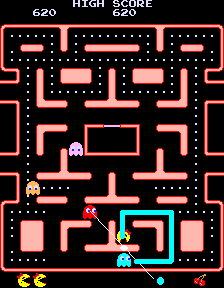 Sue (formerly known in the U.S. as Clyde – the first transgendered video game character?) targets you when far away. 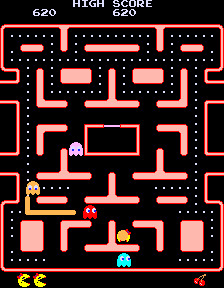 But when she gets close, her target becomes the lower-left corner of the screen instead (until she is no longer close). 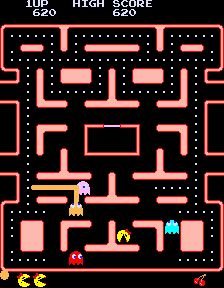 Monsters’ behavior is tied to a stopwatch which begins as soon as the level starts. Monsters that leave the house late do not start at the beginning of the routine, but pick up in the middle based on how much time has already passed.

Dying or finishing the level resets the timer.

The stopwatch is different from Pac-Man, where the monsters would alternate between scatter and chase for a longer period of time.

Scatter mode is also different from Pac-Man, where the monsters would target the four corners of the screen. In Ms. Pac-Man, Blinky and Pinky will just move randomly for the first 5-7 seconds. Inky pursues the bottom-right corner and Sue pursues the bottom-left corner if they leave the house during this period.

Eating a power pill will pause the timer, make the monsters reverse directions, and put them into frightened mode for as long as the pill lasts (or until you eat them and they return to the house). Once the pill wears off, the timer will resume and all of the frightened monsters will be restored to their previous behavior.

Ms. Pac-Man has four mazes, quite a bit up from Pac-Man’s one, but you’ll have to play through quite a few repeats before you can see them all. Level 3 is the first time you’ll see the second maze, level 6 is where you first see the third maze, and level 10 is where you first see the fourth maze. Beating the third maze four times was just too much for me; I could reach it fairly consistently, but the best I could do on a stock set of three lives was to beat it twice.

Before Data Driven Gamer, I hadn’t delved into Ms. Pac-Man with any seriousness. I knew it was more than just a sprite-swap, that it had new maze layouts and higher difficulty, but didn’t really know what made it that way. Now I do, and I have to say that this is one of my favorite games of the year; a breath of fresh air into Pac-Man, a game I’ve played entirely too much of. The biggest difference, I think, is that the monsters are comparatively relentless. Pac-Man’s monsters alternated between chasing and scatter multiple times during a stage, but now they scatter only once at the start, unpredictably, and then chase you until the end of time. I’ve gotten a million points in Pac-Man on a real machine, and I feel with enough time and patience, anyone with basic gaming competency can. At least eight players have achieved perfect scores of 3,333,360 points. To date, nobody has scored a million points in Ms. Pac-Man. That, I think, numerically illustrates what a difference the higher difficulty makes.
Email ThisBlogThis!Share to TwitterShare to FacebookShare to Pinterest
Labels: Midway