Game 112: Ulysses and the Golden Fleece

Sierra’s fourth complete graphical adventure is their first to use a double-sided floppy, though this doesn’t necessarily mean a doubly long adventure, as side A is only used for booting. Once again, I used WOZ images for more assured authenticity. Although AppleWin and MAME don’t allow writing to WOZ, you can still save your game natively, as Sierra’s adventures were designed to use blanks for saving.

The manual, as with Sierra’s other Apple II adventures, mostly covers general and familiar adventure game instructions, with one page establishing the plot. You are the legendary sailor Ulysses of ancient Greece, and are tasked by your king to set sail in search of the mythic Golden Fleece, which has been protected by the gods for “decades.” Foes along the way will include the deadly sirens, cyclops, the gods Neptune and Pluto, and others, and will at some point encounter the magnificent Pegasus.

The mash-up here of the plots of The Odyssey and Jason and the Argonauts makes my inner mythologist cry a little, but it does seem to be deliberate.

For the first time in this series, there’s now a title screen, albeit a very simple, non-graphical one. 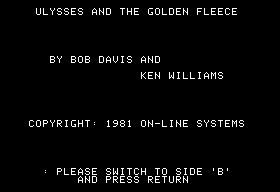 Booting into the game, we’re in Ancient Greece. 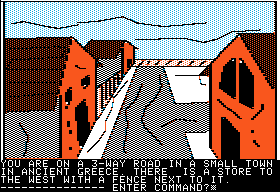 This initial area branched off to three locations; to the west and north was a town consisting of the docks, a tavern, a general store, and an alleyway connecting them. To the south lied the castle. To the east, a dense forest, a MOTLP of sorts with mostly consistent navigational rules, but just enough inconsistency to make things confusing.

At the docks, a bottle floating in the ocean had a note: 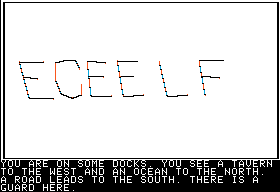 The guard responded to “TALK GUARD,” which surprised me. In later adventure games, ones I’m more familiar with, “TALK TO MAN/WOMAN” would be a universally useful command, but in earlier ones this was never recognized! All he did here was tell me that I needed permission from the king to pass, but it was something.

At the castle, the king gave me my quest, once I bowed.

I went into the woods and found it mostly straightforward to map out, except for one room whose one-way exit violated the otherwise perfectly orthogonal design. Within, I found a chest which I could take but not unlock, and deeper within, a voice warned me that Neptune schemed against me, and my only hope was to find a potion on the Island of Storms.

I’d have to provision for my trip, and I had one bag of silver, one bag of gold, plus one gold coin found in the alleyway of town. The general store had a grab bag deal: 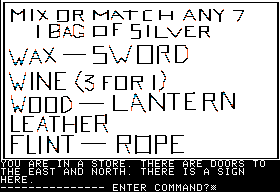 Ugh, that’s eight items, he’ll give me seven, and you just know that you need exactly seven to win the game, with no way to know ahead of time which one you can do without. Wizard and the Princess did something similar, with a travelling merchant offering four items for sale, and only one was useful, but at least there you found out within a minute whether you picked the right one or not, as the correct item was used in the very next screen. I expected no such mercy here; this seemed like a decision where the wrong choice would bite me hours later.

And all of these seemed useful. Wax to plug my ears to the siren’s lure, wine to drug the cyclops, a sword and flint for blinding the cyclops, wood, leather, and rope for ship repairs, and what kind of adventurer doesn’t bring a lantern with them?

The sword seemed the least useful – perhaps I could find something else sharp along my way, so I bought one of everything else.

I hired crew at the tavern, which included an erudite reference to Hercules, and boarded the king’s ship “Minerva,” but ran into parser difficulty, as the game did not respond to my commands such as “SET SAIL” or “LAUNCH.” A walkthrough told me to type “CAST OFF.” 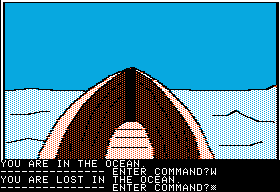 The ocean beyond was a mapping nightmare, a horrendous Maze-of-Twisty-Little-Passages, with few landmarks – most of the “rooms” were just ocean, lots of twisty one-way passages, and no way to drop items for use as breadcrumbs.

Without being able to use items as breadcrumbs, I would need a different navigational technique. What I did was that upon entering a “room,” I would use saves and loads to determine which of the four directions were valid exits, and this combination served as a room signature of sorts. If a signature was unique, then I was in a new room. Each time I entered a new room, I’d search for a path to lead to a landmark from that room, which in most cases was the docks I left from. If a signature was not unique, then I’d use a known path to a landmark, and if it worked, then I could conclude the room wasn’t new. If not, and I exhausted all known paths from known rooms with the same signature, then it means I found a new room.

It took me about six hours to map out the ocean this way. As it turns out, there is an intended linear path from the docks to the Island of Storms, and once you reach the island, there’s no turning back. In the first “room” in this path, which begins to the east of the first junction, a condor flies into your mast and dies (and can be collected), and in the very next room, a hurricane is brewing. From here until the island, there are no more landmarks or events, just rooms and rooms of identical ocean. The intended path twists and turns, with some paths reversible, some one-way, but if you veer from this path at all, you’ll be taken to one of several “lost in the ocean” rooms clustered around the docks area, and not all of them are labeled in such a way that makes it clear you took a wrong turn. In one of these “lost in the ocean” rooms, an albatross drops a bag of gems into your boat, which I assume is required to finish the game. But in another one of these rooms, a giant seagull swoops down and steals everything in your inventory. Really.

The ocean beyond the island is a comparatively simple network of nodes which sails through a pass, where on the other side, Poseidon will smash your boat, as the voice deep in the woods had warned me. 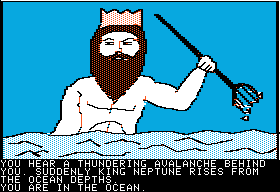 The Island of Storms is yet more MOTLP, but bearable as the graphics help distinguish one room from another.  It is divided into two segments; a small jungle and beach area, with a collectible bridle in one room, and a large network of caves accessed from a mountain on the north side of the island. The cave maze is completely orthogonal, not even a single twisty passage, and most of the room descriptions even tell you which exits are viable. It also, surprisingly, wasn’t dark, did not require me to light my lantern, and was perfectly navigable when I tried dropping it outside, just to see what would happen. Was the lantern the red herring item all along?

Within the cave, there were some points of interest:

I was able to cross the fjord (that’s not a fjord, Bob!) by tying the straps of leather with rope and throwing them across. Throwing the rope would simply toss it in, losing it forever. 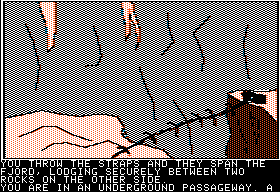 This was a one-way trip, as the straps came loose and fell in after I crossed.

On the other side, I found a dragon. 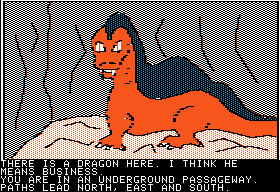 I offered my bag of gems, which he accepted and left.

Past the dragon were more caves, eventually leading to a canyon which I couldn’t figure out how to cross. 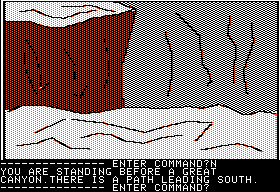 Stuck, I’m calling it a day, and giving it another try tomorrow.