There’s a WOZ copy available, but I ran into some crashes and freezes. After switching to a 4am crack DSK copy, my experience wasn’t exactly trouble-free, but I managed to reach the end.

Can’t say I’ve really been looking forward to this one. I know of this game only because it’s been cited as the inspiration behind Leisure Suit Larry, which I consider to be Sierra’s first unequivocally good adventure. Quite some time ago, I briefly played a DOS port that came with the Leisure Suit Larry collection, and found it to be familiar, but worse in every way. The locations, characters, items, and puzzles, from what I saw, were exactly as I remembered them, but with banal, flavorless writing, devoid of any character or humor, and with the same parser woes as early Sierra at its worst. If I didn’t know otherwise, I would have thought this game was poorly imitating LSL! 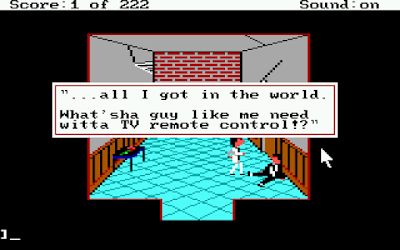 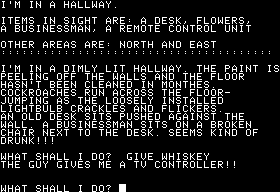 I’ll grant that the prose here is fairly vivid in describing the grimy hallway, not a patch on Infocom, but who was? But the line “THE GUY GIVES ME A TV CONTROLLER!!” evokes an image of a bored teenager remaking LSL in BASIC, copying the puzzles but not the form, character, or humor. I know designer Chuck Benton wasn’t pressed for space here as Scott Adams and his necessarily terse prose was; the disk had a capacity of 140KB, and he used a bit over half of it.

The game was originally produced without Sierra’s involvement, self-published by Benton as “Blue Sky Software.” Sierra’s edition probably doesn’t change anything; all of the copies floating around credit Blue Sky Software rather than On-Line Systems, but the manual is a bit higher quality, and features that infamous cover art with Roberta Williams and two other women.

In either version, the manual sets the stage – it’s the year 2020, the world is on fire, the economy is in the gutter, and discount sin cities have popped up around the country, offering escape and debauchery to stressed-out white collar stiffs such as you. You’re visiting Lost Vagueness for the night with some goals – have some depraved fun, seduce three women, and survive!

As the game was originally released for the Apple II, I played that version. I started off as I always do – with Trizborting.

The starting location is a sleazy bar, with the hallway, and a bathroom with a dangerous looking toilet. The graffiti on the wall revealed some computer puns and a password: 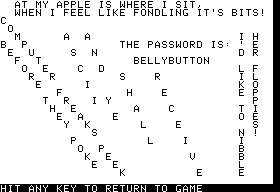 I tried flushing the toilet just to see what would happen. It did warn me that the toilet “looked dangerous.”

I picked door 1, and got immediately dumped to a DOS prompt. I’m guessing that was the door to hell. A soft-reset restarted the game.
I went through the LSL motions from memory. Bought a whiskey, traded it for a remote control, collected some flowers and a ring from the hallway and bathroom, and then gave the pimp the password to get in. One thing found in the hallway not in LSL was a newspaper, the “Gambler’s Gazette,” telling me that the Adventurer’s Hotel offers Blackjack and slot machines, which can be played by typing “PLAY 21” or “PLAY SLOTS.” The businessman in the hallway can’t be talked to; in typical style of the adventures of the era it just says “I DON’T KNOW HOW TO TALK SOMETHING!”, but looking at him reveals that “HE LOOKS LIKE A WHISKEY DRINKER.”

In the backroom, there was a pimp and a TV, but here was a first divergence from LSL; I couldn’t turn the TV on. The pimp just wouldn’t allow it.

Outside, you can HAIL TAXI to reach the game’s other areas; the casino and disco. Here, the taxi doesn’t seem to cost anything. I continued mapping while going through the LSL playthrough, taking note of things that were different in Softporn Adventure.

The pharmacy nearby the disco shoots you dead if you “get” stuff rather than “buy” it. 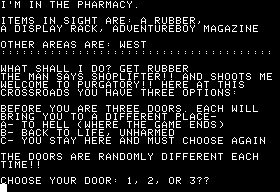 They also don’t sell wine, as far as I can tell, and the lad’s mag recommends picking up women by dancing and showering them with gifts.


The casino has a harsh policy towards insolvency – as you enter, a big loser at the slots is carted off and exterminated for vagrancy. An influence on Space Quest 1, perhaps?

A plant in the hotel’s lobby conceals a secret entrance to a magic garden, complete with magic mushrooms.

The slots seem to offer slightly favorable odds, but are a slow way to make money. 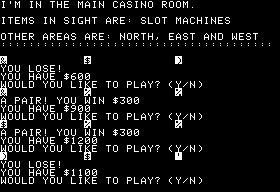 Blackjack, on the other hand, lets you double your money with a win, but the odds of multiple consecutive wins are crummy, and if you wager everything and lose, you die. I went with slots, as you can be nearly assured your funds will go up as you keep playing it, without needing to savescum.

After visiting the casino to get money and the disco/pharmacy area to get a rubber (and grilled about contraceptive preferences), I returned to the bar backroom to put them both to good use. The pimp took my money as I went upstairs.

Having “scored” once, I went to the disco with the flowers, ring, and the hooker’s candy.

I gave the nameless conquest here the candy, flowers, hit the dance floor, and gave her the ring, and then my game crashed. 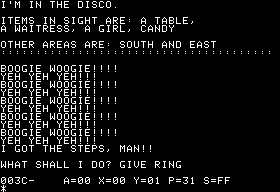 Reloading, I tried again, this time dancing before giving any gifts, and things proceeded as normal. 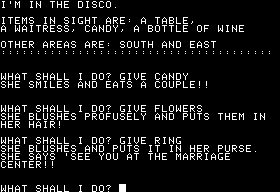 A telephone booth in the disco provided a bit more tomfoolery. 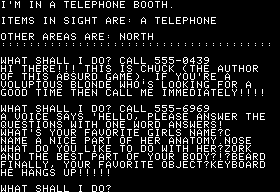 In exchange for the wine, the bum outside the disco gave me a knife and spun a yarn.

Then I got killed in a way that wasn’t signposted. 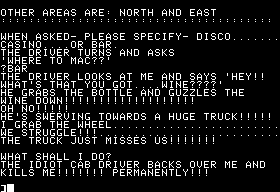 Reloading, I ditched the wine, eloped with the disco girl, and went back to the hotel, where the honeymoon suite was open. From the balcony, I engaged in some voyeurism: 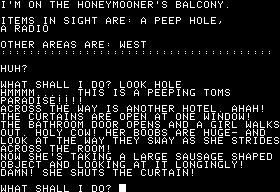 Disco girl wanted some wine, but I already knew bringing it from the disco wasn’t safe. The radio on the balcony played an ad for liquor delivery, so I ordered from the casino, and came back to a kinky surprise (not really). 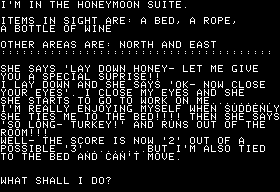 So I cut the rope with the bum’s knife, somehow. Unlike in LSL, I still had my money. I went back to the bar, and back to the pimp, who wouldn’t let me go back upstairs, but allowed me to turn on the TV this time. Channel-flipping through a bunch of dumb TV parodies eventually landed on an X-rated film “Deep Nostril” (ew), which distracted him and let me go upstairs. There I used the rope to secure myself to the hooker’s balcony and break into an apartment window, where I snatched some pills. Climbing down the fire escape dropped me into a smelly dumpster, where I found an apple core. No homeless Steve Jobs selling apples from a barrel in this version.

I also found that you can try to stab the pimp, but it doesn’t end well for you. 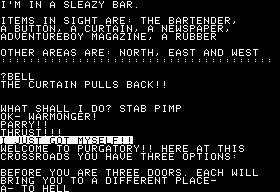 Back at the casino, I knew from LSL that I was supposed to give the pills to the voluptuous blonde at the hotel desk, but couldn’t find any ingame clues to this, so I just did it. The unguarded elevator took me to the penthouse. There, I found a kitchen, with a cabinet I could reach by climbing a stool, containing a pitcher, which I filled with water from the sink. Upstairs was a closet with an inflatable doll, which I dutifully used to no obvious purpose. On the porch was a Jacuzzi and a ringing phone, the payoff of that brick joke from awhile back.

A girl named “Eve” (the only named character in the game!) allowed me into the Jacuzzi with her, but the game didn’t allow any interactions other than looking. I knew I had to give her an apple, and unsurprisingly, my apple core from the trash wasn’t good enough. Here, for the first and only time, I had to consult a guide.

To get the apple, you have to go into the magic garden at the hotel, plant seeds from the apple core, then water them, and an apple tree sprouts.

So I went back to Eve, gave her the apple, and things got biblical. 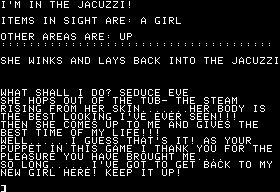 And that’s the end of the game.

I guess I found this more tolerable than I expected – I’d say it’s about on par with the Scott Adams adventures. The two-word parser was mostly cooperative, the game design is fairer than the Sierra games of the time with few dead-ends or ways to die without warning, and apart from the endgame the puzzles are completely reasonable, if on the easy side. But the writing is uneven, the humor is weak, and even without comparisons to Leisure Suit Larry – something I’m not sure I can completely avoid on a subconscious level – it just feels like it comes up short of its own ambitions, whatever those are.

To wrap things up, here’s a text dump of every use of the word “kinky” in the game:
A PASSERBY KILLS ME FOR WEARING MY KINKYRUBBER IN PUBLIC!

]LOOK BUSH
ENTERING THEM WOULD BE KINKY!!

THERE'S SOME KINKY GIRLS IN THIS TOWN!!
AND YOU NEVER KNOW WHEN YOU MAY NEED TO
USE THIS TO DEFEND YOURSELF!!!!!!!