Was there anyone, in 1981, who played Defender and thought, “gee, there ought to be more stuff going on in this game?”

That’s Stargate in a nutshell. Defender with even more stuff in it.

The basics are all there and work as they did before, but now there are more types of enemies, mostly intended to harass you while you fight off the landers, or to provide a fiercer opposition during the mop-up phase. Every five rounds is a dogfight, where you contend against an overwhelming force of new baddies, although none are as nigh-impossible as the swarm of mutants that you’ll have to face if you lose your last humanoid.

To aid you, you’ve got one new weapon; an “Inviso” cloak device, which also makes you invulnerable for a few precious seconds. In fact, the invisibility part is really just a liability, as it prevents you from seeing your ship, but the enemies don’t seem to behave any differently. I had a hard time getting accustomed to using it, much like hyperspace, by the time I knew it could save my hide, it was too late for me to react, and it was difficult to find situations where it could be used proactively.

In addition, the levels have a “Stargate,” which teleports you to any humans in trouble, but also sometimes dumps you right in the path of an oncoming foe.  Advanced players can also use the stargate as a level warp by bringing four humans into it, which triggers a hyperspace jump and a big score boost.

During the title screen, you can press a button to view a “secrets” screen with some ingame pointers. 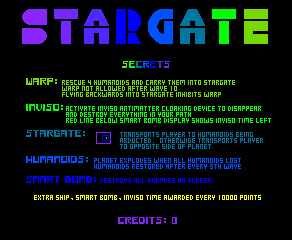 Stargate also allows you to “reinforce” your fleet by inserting two coins before play, which grants 4 additional ships, smart bombs, and seconds of Inviso. I took this option, naturally. There’s no further reinforcing once the game starts, except for the periodic 10,000 point award, carried over from Defender and with the additional bonus of Inviso time.

All of the old enemies return and are as nasty as before. The new ones are:

In my best attempt I made it to wave 10, where I had to face off against swarms of firebombers, and depleted most of my special weapons in doing so. Wave 11 was just too much; without having multiple bombs or much Inviso, I couldn’t stop the landers from destroying the planet, and then fell to the onslaught of mutants, ending with a score of over 149,000 points, just a few hundred short of a modest reinforcement.
Email ThisBlogThis!Share to TwitterShare to FacebookShare to Pinterest
Labels: Williams Electronics