This passage from Wikipedia make me chuckle.

Gorf was originally intended to be a tie-in with Star Trek: The Motion Picture but after reading the film's script, the game designers realized that the concept would not work as a video game.

No shit, Jamie. Now, Dave Nutting Associates could have gone down in history as the first video game developer to realize that maybe Star Trek isn’t the best source material to use for a shooty blast’em up game, but then they went ahead and used the Enterprise sprite, and also used a very Federation-like design for the encounter against the Gorfian flagship (a prophetic adaptation of TWOK, perhaps?). And then it wastes no time in ripping off Space Invaders.


To be fair, Midway was the licensed North American distributor for Space Invaders, but I’m still a little surprised that they were able to get away with lifting the look and feel wholesale into their own original game.

The gameplay is tweaked a bit. Gameplay features eight-directional movement instead of just two, though you’re limited in how far up the screen you can move. Instead of barriers, there’s a force field which automatically lowers to let your shots out, and is gradually chipped away by the invaders. The invaders are less numerous, only attacking in an 8x3 phalanx instead of an 11x5 one, and the last lousy invader doesn’t quite reach the same warp speed. Mystery saucers are always worth 100 or 300 points, and the shot counter doesn’t affect this.

But perhaps the biggest change is that you no longer have to wait in between shots. You’re still limited to one bullet on the screen at a time; firing will erase your previous bullet, and this takes some getting used to. It’s easy, at first, to accidentally fire your second shot too soon, and ruin your otherwise perfectly aimed first shot. But this feature gives you a lot more flexibility and margin for error; if you realize a shot isn’t going to hit anything, you don’t have to wait for it to clear the screen before firing again.

All of these tweaks serve to make it quite a bit easier than Space Invaders, though there’s one thing that makes it harder for me; I have a slightly difficult time distinguishing the invaders’ shots from the background. I don’t know if this is because of my color-blindness, but I find I have to focus harder to see the shots than I do when there’s a black background.

As this is based on Wizard of Wor hardware, including the Votrax chip, it verbally taunts you, in the same nigh-incomprehensible voice synthesis as its predecessor. Emulation isn’t quite accurate yet, but video footage of the real thing doesn’t sound any better, just different. It does seem a bit less chatty than the Wizard, but no less sarcastic.

After killing the last invader, it moves on to the next round. 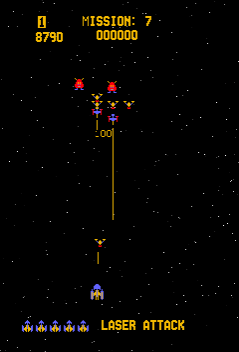 Now it resembles Galaxian, though not to the extent that the previous round resembles Space Invaders. You’ll face two five-Gorfian formations at once, and the bottom Gorfian in each formation fires a laser weapon while the other four swoop at you Galaxian-style.

And then Gorf somehow gets even more shameless. 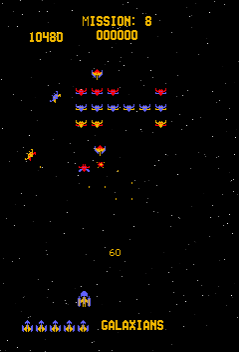 Again, Midway also was the North American distributor for Galaxian, but just what did this license permit them to do, exactly? This?

It’s not exactly the same as Galaxian. Once again, you can move in eight directions and can fire early, canceling out your previous shot, and this serves to make it easier than Galaxian. The hardware seems to struggle with so many sprites, as the Galaxians’ movement is a bit choppy while they move into formation. Shooting Galaxians mid-swoop is still worth more points than shooting them in formation, but the flagships are always worth 300 points regardless of if you take out their escorts first or not.

And sometimes these huge red demons just show up for a few seconds. 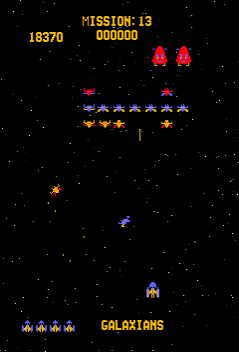 The next round is my least favorite. 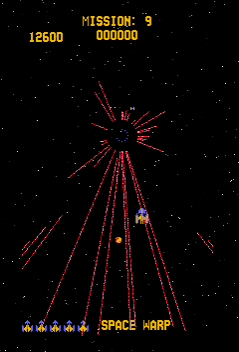 In retrospect, it reminds me of Gyruss, at least visually, but doesn’t play much like it. There’s only one ship on screen at a time, and they are tiny, and really difficult to hit. They get larger as they get “closer” but move around so much that they don’t really get easier to hit. You don’t actually need to kill any of them, but on later loops, their shots will come at you from any direction, and sometimes are nearly impossible to dodge.

Finally, there’s a showdown with the Gorfian flagship. 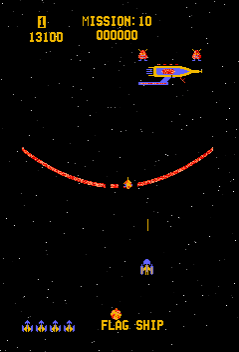 Now you have to blast through a force field while the enemy safely takes pot shots at you from behind it. On later loops, the flagship also has some of those red demons to harass you. There’s a tiny, pixel-wide opening in the flagship hull, and you will immediately destroy the flagship if you land a shot there. Most of the time, though, your shots will hit some other part of the ship, and blow off a small chunk of it, which in defiance of Newtonian physics will then “fall” and possibly hit your ship. Blasting off chunks will eventually carve open a bigger tunnel to the flagship’s vulnerable core.

Land a hit on the core, and you get a fireworks display. 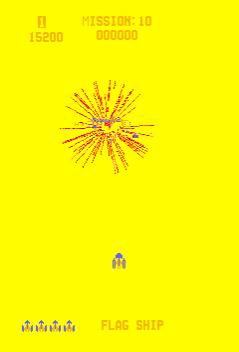 And as the flagship explodes, you’ll be verbally congratulated, and given a space promotion, indicated on the cabinet itself by an array of lamps (which MAME simulates if provided with appropriate artwork files).

Then it repeats at a higher difficulty, the Gorfians becoming faster and more aggressive. Your ship also becomes faster, but only with the first promotion.

I’ve made it to the fourth rank of Space General, but I can’t seem to get any farther.

Unusually for an arcade game, especially one so early, Midway released an official strategy guide, an “ISDF Combat Manual,” as a promotional item, with gameplay tips and background information. The gameplay tips didn’t really inform me of anything I didn’t already know, but the background information chapters state that the ISDF had previously fought campaigns against the Space Invaders and Galaxians, making Gorf a semi-official sequel of sorts, and also retconning those games as canonically, victory is impossible (as it is in Gorf). The Gorfs are an empire of sentient robots, which consume metals for sustenance, and intend to conquer earth in order to eat our coin supply. They operate on a telepathic hive-mind wavelength, but are rigidly structured in hierarchal roles, and are deliberately programmed to attack in random patterns so as to be unpredictable.

Gorf’s lead designer, Jay Fenton, began designing a sequel in 1982 called Ms. Gorf, but abandoned the project due to the North American video game crash of ’83. As of this writing, the source code is on floppy disks but has not been dumped, and nobody is completely sure what they would do with the code if it were. Coincidentally (or maybe not), Jay himself would, years later, transition to female, and now goes by Jamie.

Gorf also had a homebrew port to Jaguar, a system so notoriously temperamental and difficult to program for that it made Saturn development look easy, and it has been noted for its arcade accuracy. I don’t know if it’s really needed in the era of MAME, but the sound effects do seem a bit punchier, and the Votrax audio is ever so slightly more intelligible.

Gorf was the last true video game by Dave Nutting Associates, a company which had developed, in partnership with Midway, Gun Fight, one of the first CPU-based arcade games ever, and the earliest playable in MAME. Dave Nutting’s brother, Bill Nutting, had manufactured Computer Space in partnership with the team that would become Atari. In a way, Gorf closes a very old chapter in video game history, if only in a symbolic way.
Email ThisBlogThis!Share to TwitterShare to FacebookShare to Pinterest
Labels: Midway