Having just beaten Ultima, I started reviewing the BASIC code, and came to realize that by not playing as a Wizard, I had missed out on some game content, as only wizards can cast the four most powerful spells in the game; blink, create, destroy, and kill.

So I decided to replay concurrently with reviewing the BASIC code. I had two goals here; explore the options available to a wizard, and use the inside knowledge of the game to break it as badly as possible. I called my wizard “Woz.”

Starting off, my playthrough was much like the previous one, since spells cost both money and EXP, and I didn’t have any quick ways to make either. I went to town, bought a mace, ropes and spikes, and a horse, and journeyed into the Unholy Hole to farm HP, EXP, and gold. The closer dungeon Montor had too many traps to be good for early farming.

One of the useful things I discovered about dungeons, through the code, is that you can press “I” to search for traps and hidden doors. And every wall that isn’t part of the basic dungeon template is, in fact, a hidden door.

Once I had accrued a bit of HP and gold, I returned to town to buy things. Then I discovered something very useful. You can throw gold into the ponds to get some good stuff!

I threw gold into the weapons fountain and eventually got a blaster. I think it took five tries.

Another thing I learned is that when donating gold to the kings, your HP reward depends not just on how much you donated, but on how little you had to begin with. The best possible reward comes from having exactly 90 gold in your pocket and donating all of it, which grants 270 HP, a pretty good amount for a newbie character.

But 270 HP is nothing compared to the 3000 you get for rescuing the princess, and all you really need for that is enough HP to survive the guard’s attacks (and to know how to outmaneuver them). With about 400 total HP, I was just barely able to pull this off, and was rewarded with an early game-breaking bounty of 3000 HP, 3000 EXP, and 3000 gold.

And even better, once you pull it off, you can go right back into the castle, and everything will be reset and ready for you to do it again. So I did it again.

One issue here is that when you murder Gwino the jester, you don’t always get the key to the princess’s cell. But you can check your inventory (you want the key to cell #2), and if it’s the wrong one, you can leave the castle and try again. 3000 HP is enough for plenty of tries!

Once I had succeeded three times, I dumped most of my 9,000 gold into the stat fountain. This maxed out my strength, charisma, and intelligence, but also set my HP to 99. Apparently HP is one of the stats you can “boost,” and it’s also subject to a 99 point limit should you exceed that through fountain donations. Not a big deal, I just bribed Lord British to boost it up with the gold I had left over. And then shot his jester right in front of his face and made a mad dash to the jail, guards closely behind, to rescue the princess again for more gold.

Another three successes and I was able to max out the rest of my stats with the 9,000 gold accumulated. It’s frustrating since it’s so random – once you’ve maxed out all but one stat, each donation only has a 1/7 chance to boost that last lousy stat, but it beats going back and forth between landmarks for hours. 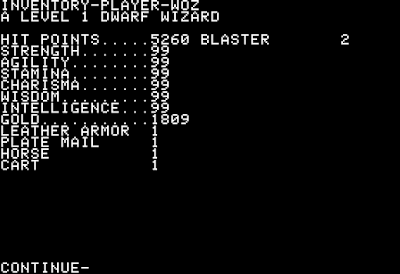 I rescued one more princess for some spending money, and then went to town to buy a frigate, more rope & spike sets, plate mail, lots of magic spells (including the Wizard-only spells), and some food, which thanks to my high IQ, had dropped down in price to 10 rations per gold, now a better deal than the food fountain’s rates.

My first quest, to kill a gelatinous cube, was very easy thanks to my high stats and blaster. It still ate my armor.

I replaced it and sailed west to Shamino’s castle for the Balron quest, the most difficult of the king’s quests. It, too, was easy. I entered the first dungeon I saw, and used ladder magic to reach level 9. The kill spell worked as advertised, killing everything that I had to deal with.

I don’t think it’s necessary to describe the next stretch of gameplay in much detail. I did the two intermediate monster kill quests next and got the gem rewards, and didn’t bother seeking out landmarks or taking the associated quests. I was limited to using the frigate to sail between continents, because the air car and shuttle aren’t sold until you reach level 4, and one of the stranger gameplay features of Ultima is that levels are not attained through experience points, but by how much time has passed in-game. Equally strangely, levelling up grants no player benefits except for access to better items in the shops.

While walking around, I did experiment a bit with wizard spells. The kill spell kills one monster, but since monsters often attack in groups, it didn’t seem to be worth using, and besides, my blaster was making short work of them anyway. Magic Missile consistently did 49 points of damage, but my blaster usually did more than that, and even if it missed sometimes, having unlimited ammo seemed a better perk than never missing.

I reached level 5 this way, but then thought, why not reach level 8 even faster? Time passes outdoors with every keystroke command. So I maxed out the emulator’s CPU speed and kept my finger on the ‘A’ button, and watched as time passed and Woz effortlessly blew away monster after monster at warp speed. In a few minutes, periodically checking my stats, I had reached level 8.

Then I went back to town to buy a shuttle and do the Space Ace quest. I don’t think source diving could have helped much here, but this is a pretty easy gameplay segment. I made a map as I explored this time, so that I could avoid the trouble I had last playthrough of finding my way back home.

And back home, I rescued the princess yet again, and used the time machine.

Against Mondain, the Kill spell is a bad idea. It doubles his HP, which starts out at 1000. 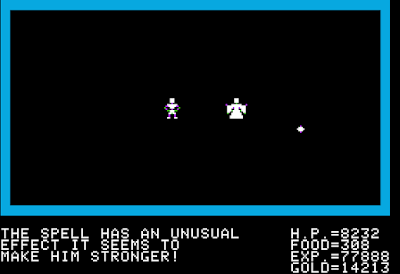 Mondain’s melee attack will hurt, doing a little over 4% of your total HP. The “create” spell prevents this by putting a barrier between you and Mondain. 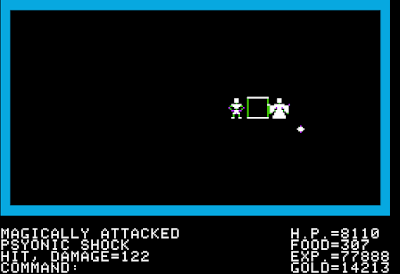 It’s not really necessary though, because the gemstone already provides a natural barrier that he won’t walk around, as long as it’s directly in his path toward you. “Destroy” will remove your own barrier if you want to for some reason.

Magic Missile did a lot more damage to Mondain than my blaster. Being a mage doesn’t boost the damage, but your stats do. 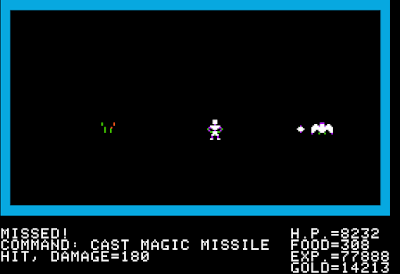 And I beat Ultima again, as a mage. In retrospect, the mage is the best class in the game, but only for the Kill spell, best used in dungeons. Create, Destroy, and Blink are all kind of pointless, and the mage gains no real advantage in casting the other spells except for a slightly higher starting intelligence, which is easily boosted with quests and the ponds.

Speaking of which, the ponds are a neat little secret, whose purpose is hinted at by the pubs, and it does feel like cheating, as it’s by far the better way of maxing out your stats and will get you the best weapons very early on.

On my next post, I’ll show the results of my dive into the Ultima code, with tables, formulas, and all that stuff.
Email ThisBlogThis!Share to TwitterShare to FacebookShare to Pinterest
Labels: Origin Systems