The next game on the whaling log is Konami’s Super Cobra, but as this is the first post on the company, I wanted to touch on some of their earlier titles first.

An anonymous commenter provided a lot of insight here, with Japanese sources and some very plausible deductions, and I've revised this section accordingly.

According to the commenter's sources, their first video games came out in 1977-1978, and are:

The first two games are a mystery. I can find no practical information about Block Yard at all, but I'd bet good money it's a Breakout clone. Flyers for the other three indicate they are, indeed, Breakout clones.


None are emulated in MAME, naturally. The earliest is Space King, and sources are conflicted on whether it came out in 1978 or 1979. Space King is a Space Invaders clone, but with altered sprites and a katakana status bar. 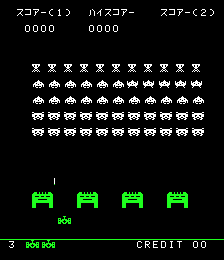 These games are listed in MAME as 1979 releases:

Kamikaze was released in the U.S. as “Astro Invader” by Stern and its gameplay was somewhat tweaked. Space King 2 is, unsurprisingly, a clone of Space Invaders Part II, and doesn’t even change the sprites. Space War is listed as a clone of Taito’s Space Laser, but it may, in fact, be the other way around.

I decided to play Kamikaze as a representative of the earliest verifiable and playable Konami original.

Note that MAME does not actually emulate the sound hardware of Kamikaze. MAME will substitute Space Invader sound effects if you have the corresponding samples file, which ironically is not used or required by Space Invaders emulation any longer. Video footage of real Kamikaze hardware shows the effects are similar but not exactly the same.

And it plays a lot like Space Invaders, but with enough innovations to the formula to make it stand out. The game is all about efficiency. The invaders don’t bombard you with shots or even move horizontally once they start descending, but queue up in an array of columns where they are sitting ducks for your fire. Eventually the columns fill up faster than you can gun them down, and then they suicidally dive, and as they crash to the ground, they release a deadly shockwave with a radius of about three columns in each direction. Before long, they are released from the mothership faster than you can fire, ensuring that columns will fill up, and you’ll have to pick and choose which invaders to shoot and which you can allow to kamikaze and avoid their shockwaves.

You can’t simply stick to an edge of the screen, as the mothership will periodically drop a big flying saucer down the middle, which will kill you if it touches the bottom. Nor can you really stick to the middle, because if the outer columns are left untouched, then they will fill up and drop kamikazes nonstop, forcing you to keep away from them and the next three adjacent columns. Then the adjacent columns will fill up, shrinking your safe middle zone even further, until ultimately you have kamikazes dropping nonstop and the unavoidable blast radii reach you from both directions.

The 1980 US release of Astro Invaders by Stern has some gameplay differences that serve to make it a faster paced, more frantic game. There are fewer columns which fill up faster, and UFOs drop on the edges as well as the center, but to balance things out, the kamikaze shockwaves are a lot smaller. You can read more about the differences here.
https://tcrf.net/Astro_Invader

Before moving on to Super Cobra, there was one other Konami game which came out earlier the same year, which didn’t quite reach whale status, but seemed notable enough that I ought to play it.

Buy Scramble and a grab bag of other Konami titles here:
https://store.steampowered.com/app/1018000/

Well, what can I really say that will add to the video? This is a clear ancestor of horizontally scrolling shmups like Gradius and R-Type. It predates Defender by a month, but also represents the start of stage-based level design in the genre, away from the wave-based design of Space Invaders through Defender where the terrain was irrelevant and all that made one wave different from another was the difficulty of fighting the aliens.

Anticipating Gradius, your “jet” has standard front-firing guns and can also drop bombs to hit ground targets, but the bombs follow a peculiar trajectory where they accelerate forward about a jet’s length ahead and then slow down to match your ship’s “neutral” horizontal velocity as they fall. Consequently, you have to fire them well in advance in order to hit your intended target, making them less useful than you might think. I found it easier and more productive to hit ground targets by flying close to the ground and firing the gun, though this isn’t always possible.

There are six stages, each with a distinct terrain type and theme of challenges, though there’s no break in the action between them. The terrain simply changes as you transition from one stage to the next. You also have limited fuel, and can refill it by destroying fuel dumps, which runs contrary to logic even by video game standards. None of the stages are particularly challenging, until you reach the final one, which has no enemies, and just some very tight maneuvering. 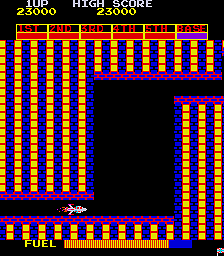 To have any chance of clearing walls like this, you must ascend while decelerating to minimum speed. However, the forwardly self-scrolling screen moves too fast and will “push” you right into the wall if you haven't cleared enough distance. Therefore, you actually must accelerate through the lower tunnel and emerge from it as far right into the screen as the game allows, and then immediately slam the brakes and ascend. With perfect timing, you’ll just barely make it.

After the tunnels are passed, you’ll encounter Konami’s headquarters and have to blow up their Pizza Planet squeak toy. 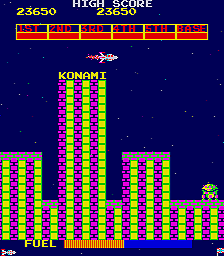 Bombs won’t work! Their trajectory means they’ll either miss or crash into the Konami sign, and if you miss, you’ll have to repeat this section until you succeed or run out of fuel. Instead, you must dive into the tiny space to the left of your target, shoot it, and immediately rise back up. With your mission a success, you get to repeat the loop all over again, only fuel will drain faster. I don’t know if there are other changes, but by the time you reach the final stage on loop 3, I’m not even sure if it’s possible to finish without running out of fuel. I hit every fuel pod there was in that stage – it would be difficult not to – and I still ran out of fuel right at the moment I hit my target. Luckily, that counts as a win, but it doesn’t bode well for getting much further than that.

This isn’t the only horizontal shmup of 1981; Universal’s Cosmic Avenger and SNK’s Vanguard also came out that year; games I’ll get around to once I reach the years of their respective developers’ first whales. But another horizontal shmup released that year just a month later, was Konami’s first whale.


No wonder it only took a month. This is practically the same game, just with a Huey sprite instead of a jet.

Maybe I’m being uncharitable. Even though it controls and plays exactly the same, it’s a lot longer with eleven stages instead of six, and the enemies are more varied and interesting.

It’s also much more challenging, with more difficult terrain, full of ridges that prevent easily gunning down your targets at low altitudes instead of using your cumbersome bombs, and many of the enemies actually shoot back at you. To cash in on this increased length and difficulty, Super Cobra now has the possibility to continue when you run out of lives, at the cost of another token and your score. You can’t just pump quarters in all the way to victory as you could with later games; you are limited to four continues per game. Beating Super Cobra with five sets of lives was significantly more difficult than beating Scramble with one.

The tenth stage was quite short and easy. I wonder if it was rushed to finish the game on time.

The penultimate “base” area, like Scramble, has you flying through the inside of a building with tall, vertical corridors that will certainly kill you if you don’t execute your maneuvers precisely; enter the shaft at full speed, and then immediately decelerate as you ascend. It’s made even more difficult than before thanks to enemies who fire at you.

Finally, there’s a quick skyline area, and at the end of it is a crate full of Konami’s money, which you can swoop down at and collect to score an extra life, and then the game repeats.


There’s one thing that strikes me about all of these early Konami games. Details on who developed these games are virtually unknown! Atari may have set a precedent by not crediting their developers, but their names and histories came to light eventually. Taito and Namco, the only other Japanese companies that I’ve looked at so far, probably did not credit their developers either, but names like Tomohiro Nishikado and Toru Iwatani are somewhat well known to video game enthusiasts, even if Galaxian’s designer Kazunori Sawano isn’t.

But I don’t know who developed any of these games at Konami. Mobygames’ credits page for Super Cobra identifies the Philips employee who ported it to the Odyssey 2, but not any Konami employee involved with the original arcade game. Konami made eight games in 1981, and there are no names to go with the original development of any of them.
Email ThisBlogThis!Share to TwitterShare to FacebookShare to Pinterest
Labels: Konami