Holy bee turds, this game is intense. You blink, and you’re dead. Focus on trying to stay alive, and before you know it, one of those green space invaders will have scooped up a colonist on the other side of the planet, and then you’ll have no chance of getting there in time to save him. Miss too many shots while trying to mop up a final cloud of tiny hornet-like aliens, whose electron-high hitboxes and erratic weaving patterns make shooting them like trying to snipe at flies buzzing about a cathedral, and the game will spawn another alien, twice as aggressive and just as impossible to hit.

And yet, it doesn’t feel all that unfair. I found that Defender is very generous with awarding extra lives, and most of my deaths were due being overwhelmed by the sheer amount of stuff happening, or to my own carelessness.

The controls and gameplay are complex for an arcade game of this period. A two-direction joystick controls your altitude, and two buttons are used to thrust or reverse direction. Like Asteroids, you are carried by inertia even when you aren’t thrusting, and although you can reverse direction instantly, this does not cancel out your momentum. You can therefore fly backwards by releasing thrust and reversing, which is often a useful battle tactic. Two more buttons are for your weapons; you have bullets that can (and must) be spammed and leave a laser-like trails streaking across the screen, and you have a limited supply of smart bombs which destroy everything on the screen (usually), and sometimes the carnage continues off-screen as well. Finally, you have a hyperspace button for getting you out of a jam, which just like Asteroids, randomly teleports you to another part of the screen, and will kill you outright about what feels like 25% of the time, which is better odds than in Asteroids.

An attract mode shows you a diorama of the aliens you’ll face. 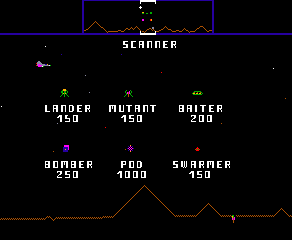 My best attempt got over 86,000 points, hardly a world record, but it surpasses Eugene Jarvis’ own high score during development.

My strategy was to target the landers first. They’re probably the easiest to kill, and any lander you spare could kill a colonist when you aren’t paying attention and become a mutant.  I’d use smart bombs on clusters of pods, and on landers in the process of abducting colonists who were too high up for me to reach in time, sometimes both at once. After the landers were finished and I’d taken care of any mutants, I’d go after remaining pods and try to deal with the swarms before the baiters started spawning (I was not always successful), and finally kill the bombers. It took me awhile, but I eventually got the hang of using hyperspace in emergencies, which certainly contributed to my longevity.

Around the 60,000 point mark, I clearly felt my concentration starting to wane, and made dumb mistakes like pressing the hyperspace button when I meant to press something else, and forgetting to check the scanner, but I still managed to hang around for another two rounds. The game is, as I mentioned, generous with extra lives, awarding one every 10,000 points, which can be easily achieved every round.

But eventually, the landers nabbed my last few colonists, seemingly all at once. When this happens, the planet is destroyed in a spectacular display of particle effects, and then the landers all become mutants. I was overwhelmed, and lost the last of my lives. Game over.
Email ThisBlogThis!Share to TwitterShare to FacebookShare to Pinterest
Labels: Williams Electronics