With the issue of version settled, I’ve started playing Rogue as it was reconstructed by Rogue Restoration Project. There’s some detailed documentation bundled with version 3.6.1 as plain text files – the earliest example of this that I’ve seen, and something that would have only been possible on a game designed to run from a computer operating system, as opposed to just booting from a disk. With version 3.6.3 it’s been upgraded to HTML. There’s ingame help too, but it’s quite sparse. 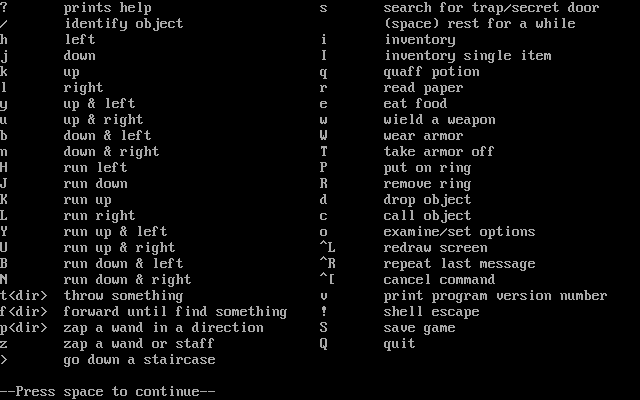 That’s it. There’s no guideline on what all of the ASCII symbols you see in the game mean, no explanation of the screen layout, no explanation for what “examine/set options” actually does, and no elaborate backstory. All of that’s to be found in “dod36.txt,” a text document titled “A Guide to the Dungeons of Doom.”

I am a senior apprentice at the fighter’s guild (why is it called Rogue, then?), and am sent into the Dungeons of Doom as a final exam, to earn membership by finding the Amulet of Yendor. After days of arduous journey through the Dark Mountains, I have arrived at the dungeon entrance. Equipped with nothing but a sword (lies, you start with an enchanted mace and short bow), armor, and a few remaining rations, I camped for the night and descended at the crack of dawn.

It’s said that Rogue was inspired by Adventure and Star Trek. The guide alludes to this, mentioning multiple times how it takes advantage of computer monitors by writing characters to arbitrary positions on the screen to create dynamic pseudo-graphics, rather than just printing updates to the game status line-by-line like a teletype as Adventure and Star Trek did. It further compares itself to puzzle-oriented fantasy games, stating that they cease to amuse once the puzzles have been solved, while Rogue is infinitely replayable with its infinite number of dungeons to explore and conquer.

Stats are basic compared to other CRPGs, even at the time. We have the usual XP, gold, level, and HP numbers, which work about as you’d expect them to. Beyond that, there is only strength and AC, which are like D&D. Strength caps at 18, and AC decreases as your armor improves.

Some of the commands are anachronistic, meant for a time when terminals were slow and CPU time was expensive. For instance, a “run” command causes the character to repeatedly move in a single direction until something interesting happens, and only then return control to the player. You can also repeat a command a fixed number of times by typing a number before the command keystroke. For instance, typing “10s” executes ten searches, which can still be handy for finding a stubborn secret passage. It can also be useful for resting for a long time, as you will automatically stop if a monster attacks you.


My first trip into the dungeons of doom ended twelve levels below the surface, at the hands of a yeti while also being flanked by a centaur and an armor-ruining rust monster. 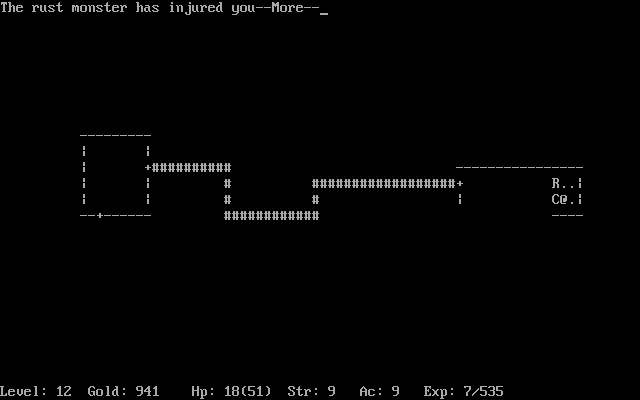 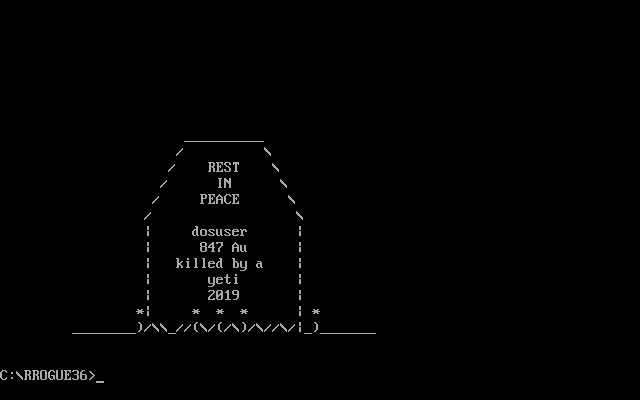 Along the way, while struggling with the controls, I picked up on many things about how the Rogue works, and some mysteries too.

Although you start with a bow and some arrows, I’m not really sure how you’re supposed to use them. There’s no discrete “attack” command, you just walk into enemies to attack them with your equipped weapon. The only way I found to hit enemies with arrows from afar is to throw them, and I can’t tell if equipping a bow first makes this more effective or not.

Scrolls and potions are one-use items with randomly determined effects. The color of a potion corresponds to its randomly chosen effect. For instance, I drank an ecru potion and felt sick. The next ecru potion I found was described as “poison.” Scrolls have gibberish incantations like “tuezant vombyt temviv.” Even after using these items, it wasn’t always clear what they had done.

I found some magic rings, but couldn’t find a good way to tell what they do. You can equip two at once. Eventually I found a scroll of identify, which I used to identify one of my equipped rings, and it turned out to be a ring of +1 dexterity. I’m not sure what that does exactly, since Rogue doesn’t have a dexterity stat. I really wish scrolls of identify were a bit more common, I found four more rings before my demise on level 12.

I also found a good number of magic wands, but couldn’t quite figure out how wands work. There is a “zap” command which invokes the power of a wand of your choice, but this only seemed to do anything with the first wand I found; it damaged a nearby enemy and from then on the wand was identified as a “wand of magic missiles.” It didn’t produce an effect from that wand every time I tried, and none of the other wands seemed to do anything at all.

Gold is scattered around the dungeon but doesn’t seem to do anything. The guide suggests it’s just there for high score purposes.

I found a long sword and dagger, but lacked any way of telling if they were better than my enchanted mace.

Level 4 seemed to be unsolvable. 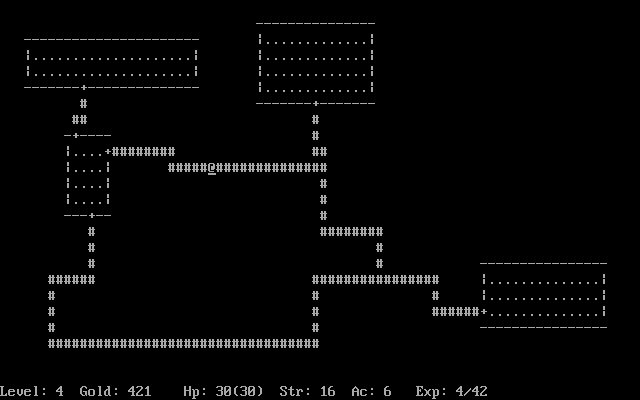 At this point, I had explored all of the passages and hadn’t found the level exit yet. It turned out there are hidden doors which can only be revealed by using the ‘s’ key everywhere. 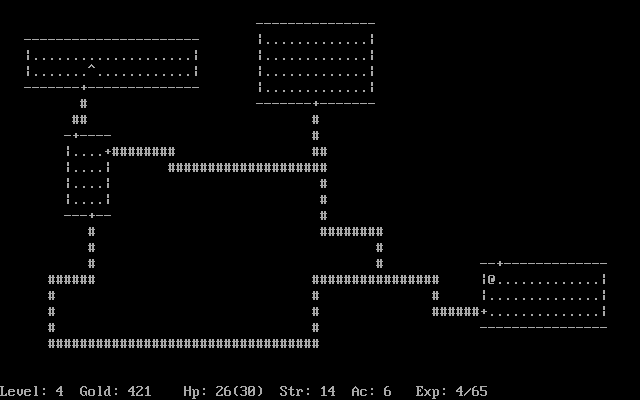 Eventually it dawned in on me that each dungeon level is divided into a 3x3 grid, and each of the nine sectors of this grid either contains a room, or a corridor junction, or a corridor dead-end. If a level seems to be fully mapped out but not all sectors have been visited, then it’s worthwhile to search the walls of rooms adjacent to these uncharted sectors.

Some enemies do more than just damage you.

In one dungeon level, I carelessly walked over a dart trap multiple times, not realizing that it reduced my strength each time I got hit by it.

I did run low on HP a few times, but recovered it just by waiting it out. This left me hungry each time, a situation rectified by eating a ration, of which I found many lying around in the dungeon. Sometimes the rations tasted good, sometimes not, but there was no obvious difference in their effect.

The deeper you go, the more likely rooms are to be dark, which makes exploring them pretty annoying, and deadly if you bump into a monster that you really don’t want to go toe-to-toe with.

In a second run, I found three scrolls of identify, and with them, found that weapons and staffs can also be identified. I identified two weapons, both revealed as +0, and one staff, which revealed it to be a “staff of cancellation” and showed it to have five charges, but I couldn’t figure out what using it does. Ultimately in this run, I just ran headlong into too many giant ants. I’m not really sure what you’re supposed to do when you enter a room and there’s an ant right in your face, but my repeated fights with the ants left me drained of strength, and ultimately a centaur finished me off.

In another notable run, I found and identified a ring of regeneration early on, and with it, my HP was rarely not full. I also found a scroll of genocide somewhere near level 10, and it asked me to name a monster type to eradicate. I chose the ants, of course. Alas, food became scarce over the next few levels, and random traps kept dumping me down to the deeper dungeons before I was done exploring the current floor. Rust monsters in the dark kept eroding my armor faster than I could remove it, and I was constantly swapping in and out of my least damaged armor. Around level 16 I ate my last ration, soon grew weak, and then fainted in front of a hostile yeti who pummeled my half-starved carcass to death.

And in another playthrough, I took my armor off in any level with rust monsters, only putting it back on when fighting tough monsters like yetis, found a strength-restoring potion on level 13 which restored everything the ants had taken from me, and had 10 units of food by the time I reached level 14. I was character level 8, had 16 strength, 43 HP, and 4 AC splint mail. I seemed to be in pretty good shape. Then a troll clobbered me to death in three hits.

In some additional playthroughs, I also discovered:
One of the recurring dilemmas is figuring out what you use your precious scrolls of identify on. The best candidates seem to be staves, wands and rings, because they can be quite powerful, and often it's the only way to know what they do. Potions seem like a waste, as you can just drink them to find out what they do, and most of the time it's immediately beneficial, though there's a very small chance of drinking a truly nasty potion of blindness. Scrolls are more situational, and (so far) never do anything too horrible as long as you don't read unidentified scrolls in battle, but there are also some really powerful scrolls that are wasted if not used when you need the effect, such as scrolls of remove curse and scrolls of hold monster. Identifying weapons and armor seems like a waste, as I have not even once found an enchanted weapon, and armor can be identified by wearing it. Sometimes armor is cursed, but it usually isn't, and curses can be removed with remove curse or enchant armor scrolls.

As I write this, I have made at least 25 attempts, and none took me farther than level 19. It's been entertaining, but constantly replaying the early levels is getting monotonous. I think I am done with playing Rogue straight, and moving forward will savescum sparingly.