Buy Missile Command and about 90 other Atari games in the Atari Vault on Steam:
http://store.steampowered.com/app/400020/Atari_Vault/

Missile Command for the VCS was one of the five best-selling games on the system of all time, and the first to sell 2.5 million copies, beating Space Invaders of the previous year.

As we’ve come to expect, there are a lot of games modes, with 34 modes essentially covering every permutation of game options. 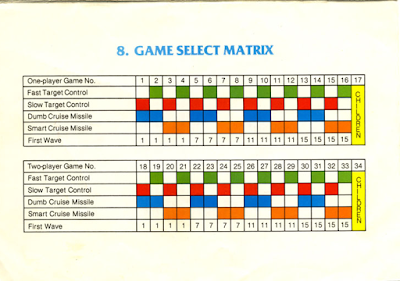 If this was an options menu, it would look more like this:

The option to start at wave “15” seems a little odd, as the manual notes that wave 13 and onward are identical.

Difficulty switches control the speed of your own ABMs. “A” difficulty sets the missiles to about the same speed as the center silo missiles in the arcade game.

The two-player modes just alternate players, and the manual states that “children” modes are extra-easy modes, comparable to modes 1 and 18, but everything is slower.

I played most of my games starting at wave 7, as this skipped the easy boring early waves, but it didn’t take too long before they got challenging.

The most profound difference from the original Missile Command is that only three of your ABMs may be in play at any given moment. You can’t spread clouds of flak like you could in the arcades. In later waves, it means shooting down all of the missiles is quite impossible. Even if you fire quickly and accurately, once you fire the third ABM, you’ll have to wait for the first one’s cloud to dissipate before you get to fire a fourth, which can feel like an eternity as the enemy missiles don’t relent. Some of your cities will get destroyed no matter how good you are.

The second biggest difference is that you only have one missile base to play with. If it gets hit head-on (a common occurrence with cruise missiles), you lose ten ABMs, and are unable to fire for about a second.

There are no bombers, satellites, or MIRVs. The only targets are missiles and cruise missiles.

Smart cruise missiles can be fooled by moving your targeting cursor directly over them. This disables their avoidance system, but it feels a bit unreliable, and is best done when you’ve got all three of your APM’s in the air, as you can’t aim your missiles effectively when trying to scramble the smart missiles’ countermeasures.

Starting at wave 7, I could usually reach wave 9 and only lose a few cities, but wouldn’t last much longer after that. But starting at wave 11, I’m lucky to survive even one round.

Starting at wave 15, I’m annihilated in the blink of an eye.

I’m really impressed by how much of the Missile Command gameplay was translated to this system, which wasn’t really designed to run anything involving more than two sprites. I’m further impressed with the amount of atmosphere left intact. It’s still a bleak game where you are doomed to fail. The crude bleeps of incoming cruise missiles are especially chilling, and when your last city falls, I find the final image of desolate craters against a stark backdrop to be more haunting than the arcade version’s exploding “THE END” screen.

But in the end, it’s still a downgrade from the arcade original, and unlike Space Invaders, none of the various gameplay modes do anything to enhance it, except maybe the ability to skip waves.