The Seven Cities of Gold: Not won!

Last session, Seven Cities' Master difficulty welcomed my tired and poor conquistadors in the same manner that Will Smith welcomed the aliens. I toned it down a notch to Journeyman.

My strategy from Master hadn't changed much, but I had greater success this time; on Journeyman the food seems to last longer, travel seems less deadly, and the natives seem more amicable. Land, disembark with two men and 50 weeks of food, explore near the coast and look for signs of settlements, and once located, park the boat closer and send everyone in.

It's still not clear to me what they were going for in designing the village scenario. Jimmy Maher's M.U.L.E. article describes Bunten as a pacifist, an idealist, a conservationist, and an anti-materialist, but if any of this was supposed to come through ludonarratively, then it's subtle. If you're trying to play pragmatically, then I can't see any reason not to go for conquest every time. Your only currency is your men, you needn't burden their backs or your budget with trade goods, and victory lets you take anything you can carry. Regardless of your intent, it is a bad idea to enter any village that you can't defeat militarily if things go wrong.

Trade is the other option, and I've gotten better at opening trade relations without causing a bloodbath. Gifts and magic tricks can help encourage the natives to settle down and make navigating around them easier, but tricks lose their effectiveness over time, and if you're too generous with gifts the chief will exploit it by demanding more and more gifts before talking to you. Even with a newly discovered village, things can inexplicably go wrong.

First, and most intuitively, you've got to bring trade goods, obviously, and if you bring enough food to make it to the village and back, you won't have much room for trade goods. If you bring only enough to make it one way, then you must succeed at trading for food, or conquer it, or else you die.

Second, and this is the most inexplicable part, touching villagers kills them. But to initiate trade, you have to locate the chief, and meanwhile the villagers are walking around the place, some of them minding their own business, some of them checking out these strange smelly aliens at a distance, some at not such a safe distance. The chief could be anywhere in the nearly featureless arena, and accidentally bumping into too many while looking for him will turn the whole town against you. The scenario becomes a minigame about avoiding people. The whole experience would have benefited immensely if using the "cautious" stance prevented you from entering someone's personal space by accident.

So my first encounter in this session was a success. The chief gave me 196 servants for carrying loads, and I traded for all the gold that my goods were worth, which I took back to the boat.

It wasn't a lot of gold, just a few hundred pieces, but the real prize here was the native bearers, who remained in my employ, and quintupled my food-carrying capacity without consuming any of it themselves, making it possible to explore the continent on foot. The natives will also helpfully point you toward gold mines, if you stand still while nearby any. 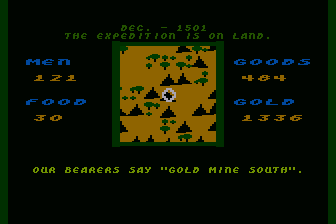 I sent my expedition westward, encountering two Aztec city-states which were not hidden for some reason - I'm assuming this happens if you have native escorts - and traded the rest of my goods for the majority of their gold reserves. In Europe, each piece of gold buys five units of goods, and those five units will sell for $20, so this is still profitable, if slower than conquest. I went back to Europe with $3,480 and a "fair" appraisal.

The process of the second voyage started much like the first. I quickly found the same village by the familiar coast, got some servants from the chief (this time receiving 600 of them for my 150 men), and loaded them up with food and trade goods from the boat to continue exploring west.

With the amount of food I could carry, was able to get much further inland than before. I'd systematically head west, check out any villages and trade goods for their gold (or in the case of two pueblo towns who just wouldn't let me get near their chief, conquer them), and return to the boats whenever goods ran out, or when so overburdened with gold we couldn't carry more.

Eventually, I hit the west coast, and returned along the next southward line of latitude, encountering a village and a few landmarks along the way back. Food and men were running low, so I set sail back to Europe. I hadn't discovered any gold mines, but the map slice I carved out had been significant, and the gold haul from villages amounted to nearly $5000.

This got me a "poor" performance rating in court and no additional financing. I guess they expected more gold.

On my next trip, I prioritized food over men and goods. Food supplies in Europe determined my limits before my money did. 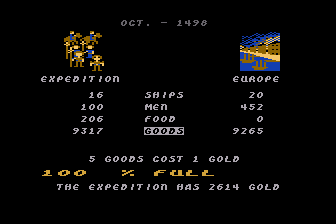 I continued exploring the continent on foot coast to coast, traveling along latitude lines ever southward with each trip and return trip. Trade with villages kept our coffers and bellies full, and every so often the game would acknowledge a landmark discovery, such as dense jungles, great lakes, and rivers, with some fanfare.

Then, on one fateful return trip to the east coast, I made a very unpleasant discovery. 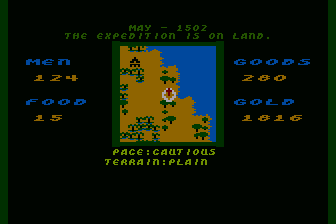 The boats were gone! And with them, my will to keep playing. If the game can just arbitrarily ruin everything like that without giving me a way to avoid it - and I have no patience for vagaries like "don't be away too long" - then I'm done. I'm a long ways from the end, and nowhere near achieving the rank of viceroy, nor the deadline of 1540 A.D., but feel like I've seen just about everything the game has to offer anyway.

Afterward, I sort of stumbled on the mechanism for establishing missions by accident. Conquer a village and not only can you take tribute, but you can also leave things behind, including men. This establishes either a mission or a fort, depending on how many. I'm not sure if there is a practical difference. 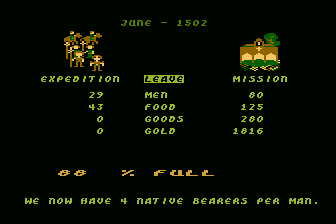 After doing this, the village becomes a safe haven where you can always store your stuff and recruit native bearers without having to go through the rigamarole of talking to the chief. That said, building missions everywhere seems completely unsustainable. Your men eat the food stored there, and as far as I know the village doesn't produce any, so it's prone to run out while you go off exploring or while traveling to and from Europe. I didn't put this theory to the test, and I don't intend to. I'm done.

GAB rating: Average. What a disappointment. M.U.L.E. was near-crystalline perfection, doing everything it set out to do with a graceful minimalist touch, with some deceptively cutthroat gameplay hidden beneath its simplistic exterior. Seven Cities, on the other hand, feels like it's bursting the seams of its 48KB vessel, desperate to do more with its concept, but just unable to. I had some fun exploring, and some fun figuring out how to form a viable expedition with limited resources, but Seven Cities just needed more to see and more to do to sustain my interest.

I admire the game's ambition, even if I have ambivalence about how it portrays indigenous relations, and we can definitely see how this influenced Sid Meier's career in the years to follow, not just with Pirates!, but even Civilization, one of my favorite games of all time, to an extent.

Seven Cities was the only singleplayer-focused title that the Buntens ever created, but was also their best-selling one, at 150,000 copies, and was also EA's top game of the year. None of Ozark Softscape's subsequent games make whale status, so this is also the last of them that I plan to cover. This was also their last Atari game. Their follow-up, Heart of Africa, was a Commodore 64 exclusive, and the rest of their 80's output was likewise focused on the C64; Robot Rascals, a party game that used physical playing cards to aid player secrecy, and Modem Wars, a proto-RTS with Internet multiplayer. By 1990, development switched to IBM with wargames Command H.Q. and Global Conquest. Their final game, released in 1993, was a VGA remake of Seven Cities. Living as Danielle Bunten Berry for the last years of her life, Dani wrote about wishing to remake or update M.U.L.E., and had reportedly been working on an Internet-playable version, but died in 1998 before its completion.