The Seven Cities of Gold: Master of none 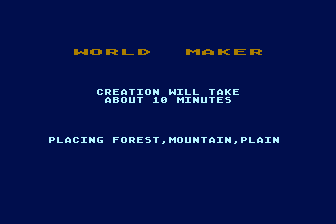 Shortly after my initial post of my first voyage to the new world, I realized that the land masses I explored were literally Hispaniola and Cuba. The random world generator, such an important part of the experience, wasn't even being used! So I decided to restart the game so that I could play with a properly uncharted world to discover.

My first voyage at Master level was a total disaster. I made landfall on a large mass without incident, though the trip seemed much longer than before, and a few men died at sea, presumably of scurvy.

But the real troubles began at land.

True to the history described in the manual, hunger, not the natives, is your biggest problem. No matter how many men you bring, every week's supply of food is 10% of your carrying capacity. This means an absolute maximum capacity of 10 weeks worth contingent on total forgoing of trade goods, still barely enough to leave sight of the boat, and when the food supply diminishes to half of what you started with, you either turn back, find a village, or start eating your own men.

The villages, so crucial to making any kind of progress, are much more difficult to find than before. In Novice mode, they're premarked on your map, but above that, undiscovered villages can only be seen when the lights are on. Move too fast, or fail to notice the brief single-pixel blip that represents the campfire, and you can pass by a settlement entirely. Of course, waiting around in place while scrutinizing your tiny field of vision for signs of civilization will dwindle down your food supply too.

I returned to the ship and started sailing north by the coastline, keeping my eye out for those blips. Eventually I found a river mouth, where I disembarked and followed south, hoping to find some settlements nearby. I found that travel along the river was noticeably faster than it had been anywhere else on land, and made it a few screens' distance inland before being forced to turn back, but had not noticed any village lights.

Finally, after continuing to sail across the coastline, the first mate alerted me that half of my food spontaneously spoiled. And I was screwed - the remainder would not be enough to cross the Atlantic back, and besides I had no gold to purchase more food with. I disembarked and wandered blindly inland, searching desperately for a village, and starved to death having found nothing. The crown commissioned my successor a year later.

On a subsequent try, I encountered an Atlantic storm, but with my Ikaruga-honed skills had little trouble avoiding it. I discovered something strange too - that if you land with fewer than ten men, you still have the carrying capacity of ten. A lone explorer can carry food for 100 weeks! Doing so is quite risky nevertheless - men can die randomly while exploring the land, and if that happens once, you're done. I discovered one village this way, far into the continent, and left before I could trigger a retaliation, and on the way back to the boats that was precisely what happened in the middle of the jungle.

On my next try, I sent two men, explored close to the coastline, and located a poor hunting village, but when I returned to the ships for trade goods, the men I left there had eaten most of the food! I went straight back to Europe, half of us starved on the trip, and I got a mixed review from the court, but at least I could continue. 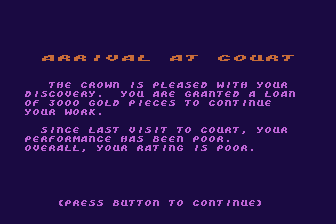 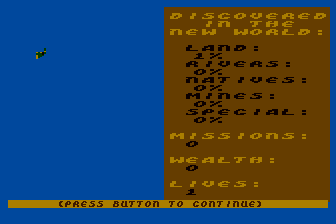 With this loan, I doubled my fleet, recruited 100 men, bought 160 weeks of food for each, and spent the rest on trade goods. On landfall, I didn't recognize the coastline, and explored with my previous two-man strategy, and spotted an Aztec city in the jungle. I entered, and the sound of war drums told me they weren't interested in trading, so I left and returned with all of my men. They panicked, ran around the city out of my control, and quickly died. 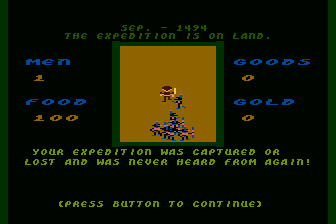