The Lords of Midnight: Second midnight

Adventure and strategy are genres at odds. Adventures, which may include RPGs under a broad umbrella, are generally intimate experiences where the protagonist serves as your personal avatar into a virtual world. Strategy trends more abstract and disconnected, with characters as mere tokens and currency to move and spend in pursuit of your goals. Adventures ask you to solve problems woven into the fabric of a world crafted to entertain and challenge you. Strategy games' worlds are canvasses where the challenges develop organically, and if you aren't in control of the situation, then your opponent probably is. Games that pursue both aspects almost invariably favor one over the other.

The Lords of Midnight, then, favors the strategy aspect. Despite looking like a blobber CRPG, there is no individual character development, no puzzles, no mazes, and no dungeons. Even with the possibility of winning the game by commanding Morkin alone, there's little to reinforce your role as Morkin so much as that you are commanding him and ignoring the rest of your assets, and that approach seems foolish. One could reimagine this as a conventional top-down wargame with virtually no gameplay changes, making it more like Empire than Ultima. The only tangible effect of the first person perspective is to obscure information from you, though intangibly, it helps you form a personal connection to Luxor, Morkin, Corleth, and Rothron, who would are otherwise mere gameplay pieces to move across a board, and it enhances immersion. You can, for instance, make an arduous hike through the mountains, unable to see what lies beyond, until a valley opens up and the plains ahead stretch out for miles, with mysterious towers and ruins or inviting villages dotting the landscape. Or you might go into the woods, seeing only the tip of a mighty citadel poking over the canopy, spend valuable time plotting a route to it that avoids wolves, only to suddenly run face-to-face with a thousand-strong army all by your lonesome.

I still don't have a strategy for beating Doomdark, the inlay topology map of Midnight is semi-legible and woefully incomplete, showing not even one of the landmarks I encountered apart from the Tower of the Moon where you start, and I barely understood what the various landmarks even do.

But I do know that points of interest can be seen from a distance, and even in the thick of dense terrain, in your periphery, which diminishes the importance of "lawnmowing." Apart from wild horses and monsters, you're not going to get spontaneous encounters in the snow. I figured my four lords could each scout a path three tiles wide, effectively searching twelve rows of the map at a time for points of interest.

I had also came to appreciate that combat in Midnight is random, deadly, unrewarding, and so far, completely avoidable, as you can easily see monsters before entering their tiles. Even Rothron, who went undefeated in my first session, soon turned out was far from invulnerable. I would ensure everyone walk around the various wolves, trolls, and dragons that festered Midnight, unless they happened to locate a magic weapon suited to the task (e.g. Wolfslayer for wolves, Dragonslayer for dragons, etc).

Right off the bat, though, I checked to see what happens when you perform a "seek" action at the Tower of the Moon.

The towers, it turns out, dispense random clues, but only once and are silent after. I tried restarting the game a few times to see what this one would say, and most of the time it was just "seek the Citadel of Dawn to find Lord Dawn" and so and so. In one instance, it told me that "Logrim the Wise can destroy the Ice Crown." 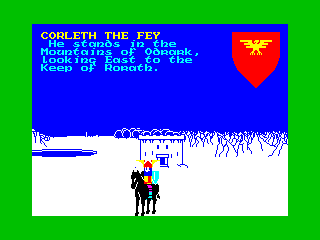 Corleth, exploring southeast, found a fifth lord, "Lord Rorath," guarding a keep of 250 riders. Corleth had an action to recruit him, adding him as a directly controllable character, and he had the option to withdraw most of the riders from the keep. 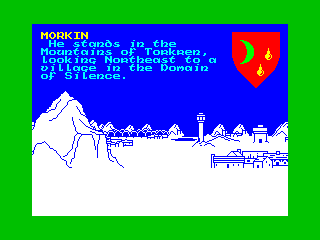 Luxor and Morkin passed through the "Domain of Silence," passing by several villages and lakes, which I could find no purpose for except resting and regaining vigor. In Morkin's lane, I found a citadel with a "Lord Gard," but Morkin could not interact.

I continued exploring, sending Rorath northwest to recruit Gard. Corleth, on the southernmost lane, recruited "Thimrath the Fey," who I sent northwest to explore, and in a few days, ran into trouble.

The "think" command was handy here. Doomdark's army consisted of 160 riders, and the keep they assaulted was defended by 120. Lord Brith was there, and commanded 260 warriors, and 485 riders. I hoped Brith was still on our side. Thimrath himself commanded 400 warriors and 800 riders, but could do nothing more this day. Corleth continued eastward, where I found and recruited Lord Xajorkith at Doomdark's ultimate goal, knowing this meant military failure should one of his armies arrive at it, undefended.

The next day, Thimrath had a context-sensitive action available: "To Battle!" Before taking it, I employed "think" to see what had happened. Doomdark's army grew to 385 riders, the kee's shrank to 85, and Brith was slightly smaller at 215 warriors, 460 riders. I entered battle, and this moved Thimrath into the keep, but had no other immediate effect. Meanwhile, Rorath made it to Lord Gard's Keep and recruited him and a few hundred riders, bringing a total of eight lords to Luxor's command.

Dawn broke and Thimrath was victorious, not that the game would tell you that until you specifically query his situation with the "think" command. 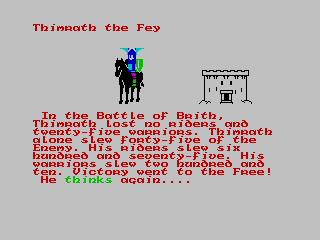 Victory! But there was no time to rest; another, larger army of a thousand riders approached from the southwest, and Thimrath, being Fey, could not recruit Brith though he seemed to be friendly. Thimrath stood his ground as the rest of the lords, too far away to make a timely defense, continued exploring.

Rorath, meanwhile, encountered an army in the western mountains. His army was slightly larger, but already tired from the journey. I reluctantly sent them to battle.

The battle results - Rorath, tired and strongly affected by ice-fear, lost far more men than he slew, leaving him with 580 riders, and facing down a reinforced army of 1,715. He would need to retreat, but where? A keep to the north looked inviting, but as he approached, he saw an army of 250 warriors, plus another 50 in reserve. His men would have to earn their shelter. Gard, nearby, would approach from the west.

Thimrath fared far better, slaying nearly 700 of Doomdark's horde while losing 210 of his own, though Doomdark's somehow grew bigger, going up to 1,400 riders, while Brith's army and the keep's reserve dwindled. Once again, they stood ground.

Rorthron, still exploring his lane east, found Lord Morning under attack at his keep, with 1,300 men to Doomdark's 955, but with the ice-fear affecting him strongly, it didn't look great for him, nor for Rorthron who had no army and exhausted his turn reaching the keep. Xajorkith, though, could bring his sizable reinforcements, which brought decisive victory at Morning. 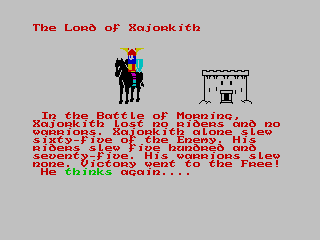 Gard's army battled Doomdark at an advantage, killing a good thousand at a loss of 300, and his survivors slightly outnumbered Doomdark's. Rorath, victorious at the keep, replenished some of his rank and took a much needed rest.

Thimrath, though, lost most of his forces, leaving only 225 riders, and Doomdark's army had grown to over 4,000 men. Lord Brith's army was annihilated. Thimrath, obviously, abandoned the keep, and Lord Brith, to Doomdark.

Corleth, meanwhile, reached the eastern edge of Midnight and started exploring north along the perimeter. Morning and Xajorkith continued to push northwest against Doomdark's army.

Days of fighting, and the armies started to falter. Thimrath died trying to take a moderately defended keep with his remaining forces. Lord Gard fell as well, for reasons I failed to keep track of. Rorath's riders were too tired to fight and had to camp outside a keep that they could otherwise storm. Xajorkith lost his entire army at Shimeril, and nearly 1,500 of Doomdark's troops remained garrisoned in or around it, while Morning lost most of his army and his nerve, rendering him and his survivors useless in battle. The war seemed to be a lost cause, but I could still explore. 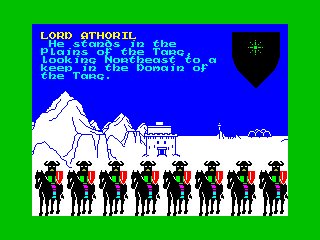 I explored and diligently mapped, and in the meantime, realizing my Excel chart was basically illegible, transcribed it to a GIMP template. The keeps, once reliable outposts for recruiting more soldiers, were mostly overrun by Doomdark's hordes, and I lacked the option to fight, even when I outnumbered them. The citadel at Xajorkith fell, a victory for Doomdark, and soon after, Lord Xajorkith himself fell to an unseen enemy in the Downs of Mitharg, south of the Plains of Blood.

I gained a few allies as my mapping took me east of Xajorkith, including the barbarian king Utarg, but Doomdark's magic had grown so powerful that they were useless in combat, and only good for my mapping efforts.

My initial team of four eventually completed their lanes, and turned north, running parallel to Corleth's trail. Corleth's gait far outpaced the others, passing through the domain of Targ, the mountains of Kumar, the Forest of Whispers, the Plains of Ithril, and finally, arrived in the northeast corner of the map, the frozen wastes of Logrim, an enclave hidden through a narrow crack in an impenetrable glacier. Logrim the Wise, and the means to destroy the ice crown, presumably could be found here.

Rothron, around this time, found a clue at a tower advising that Fawkrin also had the ability to destroy the crown.

And then, sometime around Day 30, the game informed me that Morkin had been killed in the mountains of Kumar, to an army that I hadn't even seen the day before. Game over.

Victory through military might seems pretty difficult, but then, I hadn't given this approach a serious effort yet. Now that I have a better grasp on the land's layout and the locations of various keeps and citadels, if mainly in the south, I can better try to recruit forces and coordinate an effective counterassault. I don't really see how Morkin is supposed to be able to grab the crown by himself given the difficulty of knowing where Doomdark's armies are, but then again you never know until you try.


Lords are represented by letters and numbers, color coded by race, which seems to be mainly useful for determining who can recruit who. For all lords except the starting four, both starting and ending positions are present.