I think I have a new least favorite machine to emulate. The Acorn Atom, a predecessor to the BBC Micro series, presents an environment where disk and tape images are hard to find, provenance doesn't exist, and guides on how to actually use the computer once you're emulating it are sketchy, inaccurate, or just plain wrong. Even without these issues, the Atom seems like a real dog of a computer, with only 2KB of RAM, a weird form of BASIC, a terse and confusing command line interface, and an unresponsive keyboard that turned LOAD "MINEFIELD" into LOD"MINFL" when I typed it too fast for the polling interval to keep up.

A&F Software, British bedroom game design studio named after its teenage founders Nigel Alderton and Mike Fitzgerald, started out with a focus on this arcane analytical engine before making Chuckie Egg, our next whale.

The Chuckie Egg Professional Resource Kit catalogs an impressively complete-looking list of A&F's games, featuring many titles that aren't even listed on Mobygames, though it curiously lacks Minefield for the Atom, even though Mobygames list this as their first published title.

I've selected Minefield and Cylon Attack, both for the Acorn Atom, as ancestors to Chuckie Egg. Figuring out how to emulate these games was a tedious set of trials and errors, and I'll spare you the details on the many paths I took that wound up going nowhere, but the emulator that wound up doing the job was Atomulator, which in version 1.30 anachronistically emulates a MicroSD card reader, of all things. Loose program files dropped into the "mmc" folder can be loaded into the machine's memory and ran.

Ultimately, though, neither proved substantial enough to be worth diving into. Both are pretty poor games, even considering their humble ambitions.

The goal of Minefield is to clear a field of mines with your tank by shooting at the mines before they detonate and steering clear of the explosions. You probably can't shoot them all, but as long as you don't get caught in the resulting chain reaction, you'll be fine. It does raise the question of why you even need to be there. The tank drives forward on its own and may be rotated with the A and Z keys. Ammo and fuel are limited but can be replenished on the field.

The chain reactions of exploding mines are an interesting mechanic, but this game is overall primitive and controls awkwardly.

Cylon Attack fares better, but still plays like a poor man's version of Exidy's Star Fire, or any number of better clones that followed. I'm actually moving my ship around in the above shot, but since this only moves the enemy ships' relative positions and not the star field or my crosshair, it doesn't seem like it, and it's unclear what determines when you get hit.

Anyway, that was all just build-up to what A&F are clearly best known for. 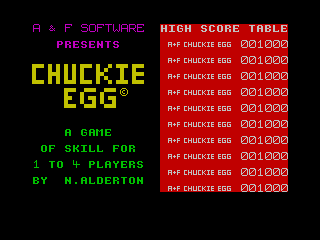 Released in 1983 simultaneously on the ZX Spectrum, BBC Micro, and Dragon computers, the original design seems to be the Spectrum, programmed by Alderton while Fitzgerald put together a Micro conversion.

One neat feature here is the ability to redefine keys. I don't think I've seen this in a computer game yet, but it's nice to not be forced to use the Spectrum's weird QAOP tradition. A feature I couldn't care less about is having up to four players, who can only alternate. The cassette case also claims compatibility with a "Fuller Speech Box" peripheral, but I couldn't figure out how to enable this.

It's another single-screen side-view platformer, with ladder mechanics reminiscent of BurgerTime or Space Panic. You're just trying to collect all twelve eggs while avoiding the geese, who are assholes and will kill you, just like in real life.

For once, the first level is pretty easy, in spite of awkward-feeling jumping mechanics that I've come to expect of these Spectrum platformers. The geese move slowly, and aren't all that interested in you. They just roam around the level, eating bird seed if they happen to come across it and being a mild nuisance. They'll get in your way, but when you can't find a way to get around them, you can usually wait for them to go somewhere else. There's no fall damage, and although the ladders are maddeningly precise about where you need to be standing before you can climb them, the game recognizes diagonal input and using this makes grabbing them so much easier.

Level 3 is where things start to get irritating.

Moving platforms combined with clumsy platforming mechanics and awkward jumping controls that make it difficult just to do a standing forward hop make for a lot of frustrating deaths. Every single failure here felt like a consequence of losing a fight with the controls.

The subsequent levels, unfortunately, don't get any more interesting. You're just looking at the same platforms, elevators, ladders, and geese, and about the most clever thing I saw were occasional eggs suspended in places where it was impossible to reach them and live, forcing you to collect them last or sacrifice a life.

Level 8 had no elevators, and consequently gave me less trouble than any level before it with them. The main challenge was having enough patience to wait for those stupid geese to get out of my way. The second hardest part was timing and aiming standing jumps correctly to get the eggs suspended in air.

Unlike every stage from 3 to 7, I beat this one the first time I reached it, though not on a single life. After that, it loops back to the first level, only now instead of dealing with idiot geese, a giant duck chases you around the level.

While this does admittedly make things more interesting, my run came to an end once I hit level 3 again, where waiting for the elevator isn't an option, and rushing onto it is suicidal.

I stopped playing here. The game will repeat forever, but subsequent loops bring the geese back, then add additional geese, and then make them move faster.

GAB rating: Below Average. There's just not much to see here, and like Manic Miner, that other ZX Spectrum platformer of 1983, the challenge comes mainly from its unwieldy controls, though Chuckie Egg is far more forgiving.