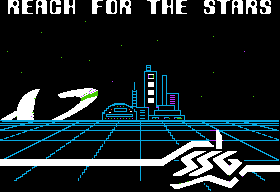 I've been looking forward to this one, which I've selected as a discretionary 1983 whale despite lacking the requisite points. Master of Orion, though I hadn't discovered it until the mid-2000's, is among my most replayed games of all time, alongside Sid Meier's Civilization. I don't remember where I first heard of Reach for the Stars, but it wasn't long after playing Master of Orion, and I do remember being excited to try it as a predecessor to the 4X genre, especially to MOO, only to quickly give up after stumbling on its oblique, clinical interface and not having a manual.

With time and practice, I've gotten more accustomed to these kinds of games and their archaic interfaces, and perhaps even more importantly, I have a set of manuals, which include a tutorial for getting started. I'm also playing the 1983 Apple II version authored by Roger Keating and Ian Trout rather than an outsourced DOS port.

Reach for the Stars was the first game by Strategic Studies Group, an Australian studio which almost exclusively developed strategy games, well over half of them wargame simulations of World War II and the American Civil War. Co-founder Keating's previous works had all been wargames published by SSI - his first, Computer Conflict, was the only one I've played, and found it simple and underwhelming. His Superpowers series, which started with Germany 1985 and continued for years after SSG's founding, are advanced-level war simulations and likely better represents his early work.

The high concept of Reach for the Stars, adapted (quite closely by some sources) from Avalon Hill's boardgame Stellar Conquest, is the usual turn-based strategy about building spaceships and conquering planets so that they can build you more spaceships. Even by 1983, we've seen this before - Empire on PLATO, Broderbund's Galactic Empire, Avalon Hill's Galaxy, to name some examples. Other cited precursors include Avalon Hill's Andromeda Conquest and SSI's Cosmic Balance II. On the surface, there's little to make it stand out. And yet, Reach for the Stars is unanimously considered to be a true 4X strategy game, while all these other early spaceploitation games are comparatively obscure.

For the first time to my knowledge, all of the elements that make up 4X strategy games - exploration, expansion, exploitation, extermination - are presented here and in a mature, complete feeling way. The stars dotting the galaxy are uncharted and may host fertile new planets ripe for settling, or barren, barely habitable wastelands, or nothing - you won't know until you explore. Newly settled planets will be underpopulated and undeveloped, and won't be terribly useful for building more warships until you build up some infrastructure and economy, which can be accelerated through interplanetary trade. Developed planets' population will grow, and can be sent offworld to populate more planets, or conquer existing worlds.

Nothing here is as complex as Civ or MOO - technology isn't so much a tree as a straight line that unlocks incrementally more powerful warships and base defenses as you invest funds. There are only two kinds of non-warships - scouts and colonial transports, and neither improves. There are no races - just four sides with identical abilities and traits, no trading between empires, and no room for any kind of diplomacy except for whatever gentlemen's agreements are forged between human players, knowing there can only be one winner.

Starting off, I had a versioning problem. Like several of SSI's games, Reach for the Stars has had multiple editions. Three, to be exact, not counting ports. Unlike so many of SSI's games, the first edition still exists and is dumped in the Woz-a-Day collection, and my policy is to play the earliest edition whenever feasible. However, there don't appear to be any manuals for the first edition - the best one available is for the 1985 second edition, which it turns out plays mostly the same as the first edition, but has enough changes that some things in the manual don't apply. For one, the manual's tutorial section instructs you to play a "tutorial scenario" from the main menu, and such a thing does not exist in the first edition. Even more frustratingly, the manual's instructions on how to end a turn do not work in the first edition - here, you must press Ctrl+E; a combination not even alluded to in the second edition manual, which I discovered through exhaustively trying every key and key combination I could think of. Who knows what others may exist? Nevertheless, I eventually grasped the game flow and mechanics.

In my first real game, I played a 40-turn game, the shortest allowed, with all gameplay options set to the default. I played scouting for planets and colonizing unsettled ones at the earliest opportunity, hoping to build up my own resources before going on a galaxy-conquering warpath. I'd discover suitable planets much quicker than I could colonize them, as it takes time to build them up, but what I did colonize was never seriously threatened by the computer AI. On my handful of planets, a small force of 5 Mk2 starfighters was enough to drive off the occasional invasion task force. And then, the game ended in a substantial defeat.

Reach for the Stars apparently does not favor a conservative playstyle. Victory points are the ultimate arbiter of success, and the real payoff is through conquest. You gain points every turn that you control a conquered world, and they're worth almost quadruple the points of one that you settled peacefully. Because conquered planets get you points every turn, the sooner you can grab any, the better. Evidently, the AI-controlled Player Four did this early on, just not to me. However, conquest is expensive, and conquered planets are simultaneously less productive than settled ones and more difficult to hold onto, as a growing population will eventually rebel against your garrisoned force unless you continue to grow it proportionally.

My next post will walk through a 40-turn game in which I (hopefully) know what I'm doing.
Email ThisBlogThis!Share to TwitterShare to FacebookShare to Pinterest
Labels: Strategic Studies Group