For the sake of my time and sanity, I've relaxed my 30-minute saving rule to 20 minutes. Following the original rule strictly, my minutes all too often looked like this:

That's a net gain of three levels in one hour of play, and only two of them were not trivially easy. To be fair, I've also learned how to beat level 88, seen level 89, and between this increased knowledge and my surplus of lives, I'll be better equipped to beat level 89 during my next session. This sort of glacial progress got me through Miner 2049er and Jumpman, but I've still got 63 Lode Runner levels to go! For now, a save every 20 minutes feels like a good compromise so that I can finish this game before I've spent more time on it than I spent playing Morrowind.

Continuing my pattern of writing whenever I feel like it: 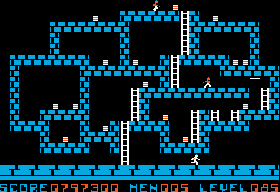 This brain-shaped level isn't all that taxing on the little grey cells, but does have several false bricks to trip you up. To solve the level you'll want to take as few trips to the ground floor as possible, because the center ladder is the only way back up, and if all three guards get between it and you, you're sunk. 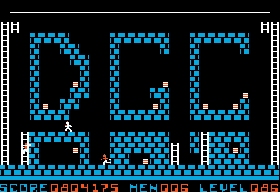 86 presents an interesting brain teaser. Just how are you supposed to get the inside the lower-left partition? Dig a space above it and drop through, and you're stuck. You could dig away the left wall first, but then you wouldn't be able to climb up and onto the wall to get the crate in the first place. The solution here is pretty clever and something I haven't seen yet - you do in fact dig away the left wall from the ladder, but before blasting the bottom tile, wait until the top one is about to respawn. If timed properly, the top two tiles will respawn, the bottom one won't for awhile, and you'll have time to grab the crate and leave through the left. 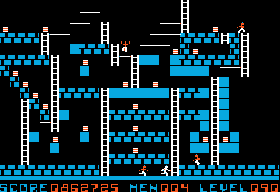 90 is hard! So many secret false bricks will drop you to your doom, like one below the lower-most crate that will drop you onto an non-diggable surface where guards might flank you from the directions of both ladders. Then there's a pocket on the upper-right of the board where multiple guards tend to get trapped as the stage drags on, making it an interesting challenge to snatch the crate inside without getting killed, and then get out. And there's a false brick above that pocket that will drop you right inside if you don't know it's there. 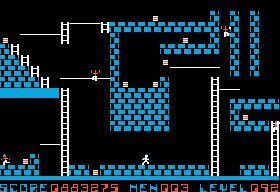 92 was just a bizarre level, all owing to the single tile-wide gap in the lower floor. The only way to reach the left side of the level is by getting a guard to fall into that gap and crossing over his head. The problem is, guards won't walk into pits that you didn't dig! And yet if you dig a hole just to the right of it, in this case one might. But then you'd have to find a way to get him out of that pit, and get him to drop the crate somewhere you can retrieve it, and I found that by the time I was ready to do this, I often had two guards "stuck" on the left-most ladder, their pathfinding logic utterly broken by the gap that could be spanned by walking across their comrade's head. I didn't feel like I "solved" this level so much as I messed around until the guards were cooperative with my goals. 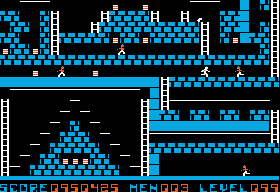 In level 99 it's very easy to get the guards permanently trapped in the gaps between the "teeth" in the middle-right section and in the pit on the lower-right, which has a roof of false bricks. In fact it's difficult not to get them trapped this way. One problem - if they're carrying gold when they fall in, it's gone and you're stuck. And the leftmost guard is certain to pick up a crate. So you'll need to get it back before trapping them. Do this right and you're good. 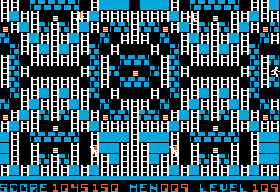 Level 109 just gave me a headache from trying to read all this nonsense going on. Apart from that, the main difficulty here is that the guards tend to get stuck on the pockets on the lower left and right, and the only way out is through the bottom-center passage that connects them to the rest of the level. If you can lure them out, grab the crates inside, and leave without getting killed, then the rest of it isn't very hard, just confusing.

I'm now at level 124, and it's getting pretty difficult. Over the past eight saves, representing over 2 hours 40 minutes of play, I've advanced a mere 17 levels. I'm also finding that luck plays more of a role - whenever you kill a guard, the respawn location is random, and sometimes you need them to die and respawn in locations you can't reach yourself to retrieve crates there, and you have no control over that. Other times you just need to trap and kill a whole bunch of guards that are in your way and can't be evaded, and just have to hope the places they respawn doesn't put them even more in your way.

It's also not much fun to slog through any more. But the end's in sight, and I figure I can wrap this up in a few days.