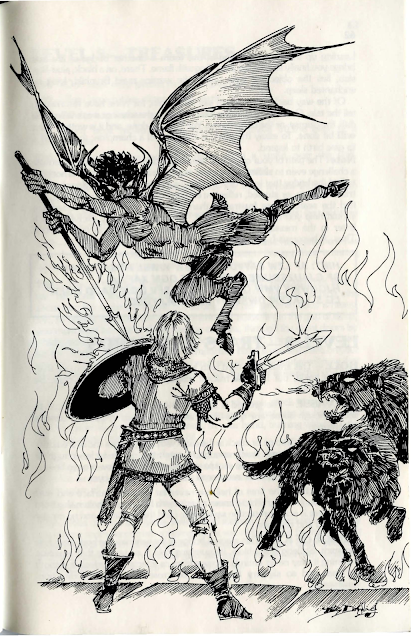 By most accounts, hell is an awful place, that if you must visit, you'd better visit quickly. The Book of Lore game certainly paints an intimidating picture of a land filled with fearsome beasts, wailing souls, deep crevasses hidden in the dark, and scourging hellfire everywhere. There are no room numbers or descriptions, but instead two pages describing the obstacles and encounters seen during our journey into hell and back.

I prepared by spending most of my remaining money on stat-boosting potions and magic arrows. The very atmosphere can affect you in ways that you'll never recover from, so I went all out in the hopes of making this trip a fast one.

The denizens of hell weren't nearly as much of a threat as it might have seemed. Lost souls and shades can drain your stats if they hit you, but in the wide open areas that characterize this game's final level, my magic boots allowed me to easily stay out of their melee range and kill them with magic arrows, or to just run past them. My enchanted armor gave ample protection from the other monsters, such as pyrohounds and behemoths, who simply deal damage.

The real challenge is navigating the bleak void, which is the central area in the plains of hell. With no room numbers and no walls except on its very fringes, loose treasures are your only beacons, and it quickly becomes very clear that hell exists in non-Euclidean space. Retracing your steps will not always take you back to where you were before, and it's not always clear when it does or doesn't, as the "rooms" lack means of telling them apart. You're meant to wander the plains aimlessly, drinking elixirs and nectars to stay alive, until you stumble upon the way out. Hell is impossible to map.

I realized that one thing does uniquely distinguish one room from another - their dimensions! By using the ingame save function within a room, then counting the steps needed to leave it in one direction, reloading, and counting the steps in a different direction, I could accurately measure the size of it, and uniquely identify it. I found that the rooms all fit together nicely into a grid, and that the size of a room could determine exactly where it lies in the grid. I had to use a new character for this approach, though, as the magic boots I found in the labyrinth double your movement, making it impossible to walk only one step at a time.

This still took days, though. Although the grid is laid out simply, navigation between the cells isn't. Sometimes moving east takes you one cell east, and sometimes it takes you somewhere completely different, but without the map you would have a difficult time telling the difference; either just looks like wandering aimlessly in a pitch black void. I initially used Trizbort to map things out, and then used my Trizbort map to annotate the edges which defy orthographic mapping (e.g. C5's east, west, and north edges).

My map of the plains of hell: 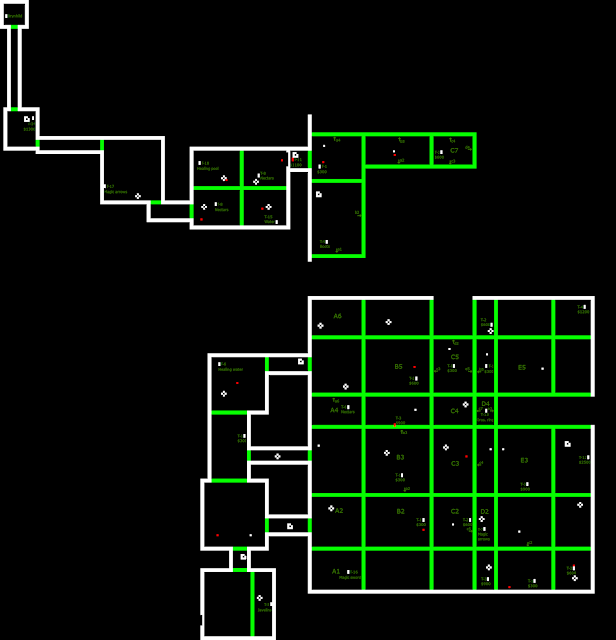 The entrance is the southernmost of three vertically-connected rooms, each one with a corridor to the plains area. 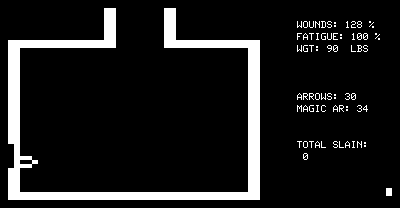 Even in this entrance room, there's an evil trick. The manual states that you may see a set of crystalline javelins in the shadows, but that isn't apparent here. This is because while the screen appears to be one large room, it is actually two. It would probably not occur to most players to bother exploring the section of the room east of the north passage, but it counts as a separate room, and its treasure, three javelins that will kill anything in one hit, reveals itself when you enter it.

Moving north through the passage, we encounter hellfire in the next big room. 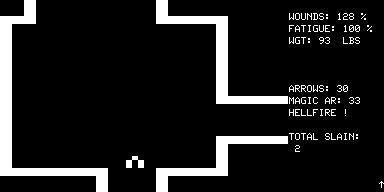 Hellfire appears to be an environmental hazard that inflicts heavy damage if you stick around, but is in fact a standard enemy with an invisible sprite, and can be fought like one. With my stats and gear, it isn't even very challenging. You can just swing your sword blindly and will eventually hit it.

The tunnel to the east leads to the plains. 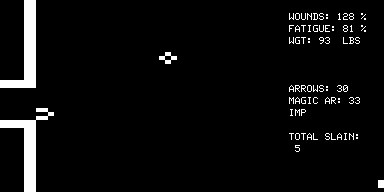 The simplest path to the exit is to first head north until you reach a room I designated A4. Here, you'll find treasure #8, some nectars. Then head east, past C4, to D4, where you find treasure #13, an orichalcum ring which I assume has some intrinsic benefit. 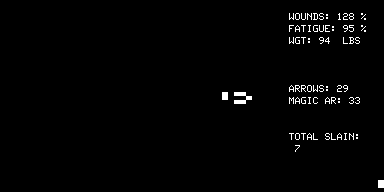 Turn around and go west, to enter a room C7, which has identical dimensions to C4, but is in fact a different room, and I've positioned it far above the plains. Keep going west to the exit.


From here on it's a linear path, past a cavern full of treasures better ignored than weighing you down, to the demon that guards the cavern where Brynhild slumbers.

Brynhild weighs 150lbs, and it is quite fatiguing to sprint through hellfire, with hellhounds on your tail and a battle armored Valkyrie slung over your shoulder. This is where all those stamina-restoring nectars come in very handy, because you probably don't want to slow down.

On the return trip, the bridge itself attacked, but I killed it with my last javelin.

On the other side, death itself awaited. I simply ran.

With my map, I had no trouble finding my way back to the entrance. I simply ran past enemies whenever possible, drank more nectars when I had to, and when enemies appeared in narrow corridors, I killed them with my magic arrows.

GAB rating: Average. Hellfire Warrior improves much of what I found lacking in Temple of Apshai, and is made a more complete CRPG experience by the expanded shops and services, and of course by having a real quest. It's a much better game than Akalabeth of the same year, and better than Ultima in many ways. Exploring the dungeons is as entertaining as it was in the first game, but more purposeful, now that your treasures and gear are both permanent and useful. It's just too bad that the room descriptions didn't have the same amount of effort put into them - half of the dungeons don't even have any, and the setting here just doesn't feel nearly as well developed as the desolate but menacing ruins of the Temple of Apshai.

There's plenty of room for improvement, though. Dunjonquest's tactical depth is barely expanded on at all. Only the magic boots are a real game changer, and while it's great that you can finally get enchanted armor, often your victories in battle are determined by how good your armor is rather than your combat actions. There is no magic system, there's very little to distinguish monsters from each other aside from how bad it would be if they hit you (even Morloc's Tower had spellcasters!), and of course the original TRS-80 version is still almost unbearably slow, made tolerable by MAME's turbo key.

I also really wish that Hellfire Warrior weren't so coy about what magic items do. I still have no clue what the expensive mandrogoras do, and I noticed no difference in combat performance from collecting any of the magic items except for enchanted weapons and armor. They don't even show up on your character sheet, and apart from the magic boots, poisoned darts, and javelins, I'm not even satisfied they do anything at all. The orichalcum keys, for instance, supposedly unlock the doors to hell according to the manual, but they weren't necessary at all for the throwaway character that I used to map out the plains.

I did try to read the game's BASIC code, but it was no use. I extracted it just fine, but found it an undecipherable mess. Clearly, readability was not a priority, and the more immediate concern was getting everything to fit wherever it could in the system's tiny 16KB footprint.

Two more Dunjonquests await me, but I'm not looking forward to them, especially not Upper Reaches of Apshai which re-uses the extremely limiting gameplay of the first game. Before that, though, I will play a two-game spinoff series. In space.